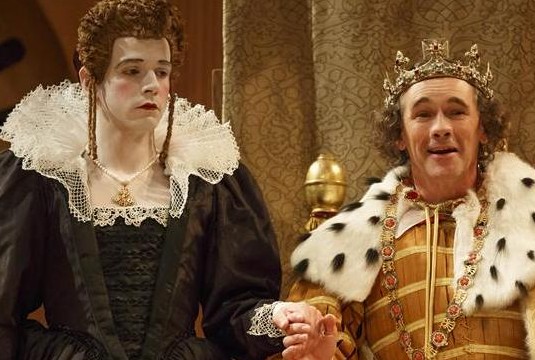 Ah, Shakespeare. In a Broadway season filled with Hamlets, Macbeths, and Romeos, there is no short supply of good old Bill. Admit it. The word “Shakespeare” conjures up very specific images (a skull named Yorick, perhaps?). For a lot of people, the word “Shakespeare” also conjures up bad memories of a high school literature class Let’s face it. Shakespeare is not exactly easy reading for those of us who are unfamiliar with the complexities of the English language in the late 16th century. But friends, Romans, countrymen, lend me your ears – when performed well, an evening with Shakespeare can be engrossing, shocking, hilarious, emotional, and utterly unique (no need to bring Ye Olde Sparknotes).*  Moreover, the beauty of living in New York City is that there is no need to travel to Shakespeare’s Globe in London to see Shakespeare done well – Shakespeare’s Globe has come to New York in the form of two plays in repertory: The Tragedie of King Richard the Third and Twelfe Night, both starring the luminous Mark Rylance.

On a roll of the dice, I saw Richard III. I will not go into great detail about the plot. Suffice it to say, Richard III is among Shakespeare’s most detestable main characters. There is almost nothing that he will not do in his crusade for power – fratricide, uxoricide, amicicide, child homicide – anything ending in “cide,” short of suicide. Despite eventually demonstrating that he has a conscience hidden deep (deep) down, Richard III has no redeeming qualities. He manipulates everyone to propel his way up the royal ladder and manages to bully those who oppose him into fleeing or acquiescing to his authority, with the exception of Queen Elizabeth who delivers a fantastic verbal and clever Richard III smack down in Act II. Even Richard’s mother gets fed up with him. Shockingly, Richard is an ignorant and insecure fool, which makes his rise to power all the more frustrating. Of course, it also makes his demise all the more celebratory.**

I am told that seeing a show in Shakespeare’s Globe is a singular experience that transports audiences back in time, and the cast and crew of Richard III did a remarkable job of re-creating the Globe experience on a New York stage. For example, the performers get into their beautiful, hand-stitched costumes on stage twenty minutes before the show starts. This tradition also gives the audience time to admire the set, which is simple and constructed mostly of wood, with the exception of four gorgeous chandeliers that hang above the stage and are alit with dozens of real candles. Furthermore, Richard III features both period music and dancing. Musicians playing Renaissance instruments entertain the audience throughout the show (a Broadway first), and the entire cast engages in a fun, albeit seemingly out of place, dance number at the end of the show.***

The creative elements were undoubtedly key in re-creating the Globe experience; however, there was one aspect of the production that gave me a new perspective on Shakespeare. Literally. You see, I was sitting upstage left during the show. For those unfamiliar with theatre terminology, I do not mean to the left of the stage. Nor do I mean near the front of the stage. I mean on the stage. Both Richard III and Twelfth Night have limited on-stage seating available for all shows, and sitting on stage adds a whole new dimension to the theatre experience. The actors interact with the audience on stage during the show, and I found myself lunging backwards as swords were swung nearby and men were sent flying into the wooden box in which I sat. In addition to feeling like I was part of the action at times, eye contact with performers was unavoidable during the show (and a bit unnerving, depending on who they were portraying), and I had a lovely chat with Mark Rylance and several other actors on stage before the show started. Based on these experiences, I can confidently say that sitting on stage is an opportunity not to be missed.

The creative design and staging were not the only authentic elements of the show. Despite having three female characters, the entire cast of Richard III is male. And spectacular. Of the talented ensemble, Liam Brennan (portraying Richard’s brother Clarence), Samuel Barnett (Queen Elizabeth), Angus Wright (Duke of Buckingham) and Joseph Timms (Lady Anne) all gave particularly noteworthy performances. As an aside, Timms and Barnett both stunned me with their ability to glide quickly across the stage with grace – so much so that I was convinced they had wheels on the bottom of their shoes.

Of course, Mark Rylance is in a league of his own. Having been the Artistic Director at Shakespeare’s Globe from 1995 to 2005, Mr. Rylance would know a thing or two about performing Shakespeare well. He clearly knows that his audience needs some prompting and direction to understand what is going on in the play and ingeniously articulates his lines with an unparalleled physicality that draws the audience in. Mr. Rylance understands the archaic language of Shakespeare so that the audience does not have to. Did I understand every line of the play? No. But it did not matter. I followed the plot, I laughed, I sat horrified, I cheered and I wanted to know what would happen next. What more could I ask for?

Ultimately, this production of Richard III is a delight and proves that Shakespeare is accessible to all audiences, even when Shakespeare’s Globe is not.

You can see Richard III and Twelfth Night from November 10 through February 1 at the Belasco Theatre.

*Shakespeare can be interactive too. Sleep No More in NYC is emersion theatre at its finest and will change the way you think about both Macbeth and live theatre.

**Oh come on, this is Shakespeare. Assuming that the title character will survive a Shakespeare play with “Tragedie” in the title is like going into the movie Titanic and thinking that the boat has a shot of making it to New York.