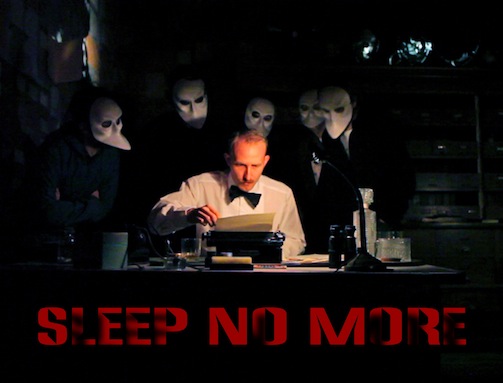 Diary of a Black Mask

I wasn’t in The American Repertory Theatre’s (A.R.T.) acclaimed Sleep No More. And I haven’t even seen the version in New York. But if you saw the version in Boston, then I might have been lurking in the shadows behind you, wearing a black mask.

If you haven’t seen the show at all and are therefore totally creeped out by what you just read, calm down. Black Masks are the glorified ushers/stewards of Sleep No More.

The Basics:
Sleep No More is an immersive theatre adaptation of Macbeth crossed with Hitchcock’s Rebecca. Again, I haven’t seen the production since it moved to NYC, but in Boston, the show spanned all three levels of the wing of an abandoned school, and everything about it—from the lighting, set design and decoration, sounds, and even smell—was planned (as much as possible) to be part of the show experience. The show was set up so that the audience entered the school through a bar, were given white masks, and were deposited on different levels of the school through the elevator. From there the audience could wander the space at their own leisure or choose an actor to follow and craft a new experience of the show each time.

The job of the Black Masks was to help audience members who wanted to find their way back to the bar, bathroom, etc., prevent audience members from going to restricted areas or getting lost, and assist with set up and clean up at the beginning and end of the night. Black Masks would also be in charge of reminding patrons not to use their cellphones, take photographs, or disrupt the show. By the way, the name “Black Masks” came about because the audience wore white masks and the Black Masks wore (wait for it)… black masks.

Memory Lane:
Just before I volunteered to be a Black Mask, I didn’t know hardly anything at all about the A.R.T., nevermind Punchdrunk (the British half of the two-company collaboration). I had a friend who was majoring in stage management and had somehow gotten in contact with the volunteer coordinator at Sleep No More and asked me and some friends if we would usher. We said: “Sure, sounds like fun.” When we finally found the school, we went inside and entered this weird horror set. There was fake blood everywhere and dusty curtains and lots of tape. Some of the first things we saw were the birds, the eel, and some washing machines full of “bloody” costumes and sheets. Then we went through some basic training—getting acquainted with the layout, the stewarding system, the walkie-talkies, and some rules—and were told to show up in blacks for the show.

Seeing the building during the day, with all the lights on, and seeing it during the show made a world of difference. During the show, the school was like the inside of a decadent, colorized noir film, or a living dreamscape. As a Black Mask, I got the opportunity to see different slices of the superb and demanding show over and over again. And because of the immersive nature of the show, all the other Black Masks and I were part of the experience. Hopefully we weren’t intrusive, or distracting, but the idea was that when we were needed, we would step out of the shadows, serve our function, and fade into the background. Again, I was never in or around the show for the rehearsal period or anything like that, but just being exposed to that show was a permanent eye-opener.

What’s a Sleep No More?
Sleep No More is part play, part art installation, and (in my opinion) part social experiment/challenge. The play uses a very expressive and emotional soundscape, but the majority of it is in the music—the actors only have a few whispered or muttered lines throughout the show (with the exception of a couple monologues scattered throughout the cast) so most of the acting and story-telling comes through movement and visual cues (tableaus, etc). The set decoration, costuming, and lighting are also colossally important to the tone, feeling of depth, and richness—to the feeling that there isn’t a backstage, that the theatre space is its own complete world. I think perhaps the thing that most impressed me about Sleep No More, other than the physically demanding performances, was this immaculately constructed sense of a fully realized other world.

The reason that Sleep No More strikes me as part social experiment is that the actions of the audience determine the dynamic of the show each night. The most interesting and demanding part of being a Black Mask was dealing with the audience. Again, the audience wears white masks, the stewards wear black masks, and the actors are bare-faced throughout the play. Despite these physical reminders of status and role, there’s a significant blurring of lines as to what the audience is asked to participate in, and what is appropriate or inappropriate participation. Since there aren’t many stated rules, the play provokes instinctive responses, vague senses of what is right, wrong, too much, too far, but also makes you question them.

For example, there are certain interactions where the witches touch people, and physically control an audience member’s movements. Are you really sure that your “too far” is too far? Maybe they want you to physically react to them. Can you be sure of what they want from you? And while the line for the audience is being blurred, the line on power and insecurity/discomfort is being equally blurred for the actors. Black Masks were specifically stationed in the basement for the witches’ dance (in which there is a lot of fake blood and quite a bit of strobe-lit nudity) to ensure that audience members didn’t threaten the actors’ safety or sense of security.

Aaaaaand we’re back on Memory Lane:
Like with most provocative stuff, people responded really differently. In the beginning of the show’s run, before there were a lot of reviews about what kind of show it was, a lot of my job was escorting unsettled older patrons back to the bar area. Then my job became increasingly about policing chatter from the audience, and encouraging them to wear their masks properly. With different audiences, the issues were different, and as audiences began to have higher numbers of repeat patrons, the issues shifted from assuaging their fears to discouraging unwelcome expressions of enthusiasm.

I specifically remember one night we had a group of students (I think they must have been highschoolers, but I have no idea how a school got away with sending some highschoolers to Sleep No More—I might be getting these details wrong. It was two years ago, cut a girl some slack). Anyway, we had these students who felt particularly empowered by the anonymity provided by the white audience masks (There was an unspoken: “Whatcha gonna do? Tell my teacher my name? You don’t know my name, and you can’t tell the teacher to watch the dude in the white mask. Nyah nyanyanya na.” Ugh. Brats.) and these kids got … rowdier than desired. It was fine. We bothered enough of them repeating ourselves to get them to behave, so it was fine. It was just an interesting phenomenon. I certainly felt empowered by my black mask and the anonymity it provided (although, admittedly, the black masks were creepy as all get-out, and I was actually in some kind of authority position, so … take that for what it’s worth). I think part of why the production felt so infinite to me was that the audience (and therefore, the show) would shift a little every night.

In Short:
I loved being around Sleep No More. It was work, but I had fun, and more importantly, I got a ton out of it that’s stuck with me. I have a lot of memories, thoughts and feelings. Every night was a different experience, provoked a different meditation on the boundaries of theatre, provided different slices of impressive physical acting, and above all, proved to me that earth-shattering theatre existed, and that with enough commitment and attention to detail, mere mortals could create it.

Basically, if the NYC show is anything like its Bostonian counterpart, you should try your damnedest to scrape together the ticket money and GO SEE IT. This is one of those shows that just might be your life-changing theatre experience waiting for you to find it.