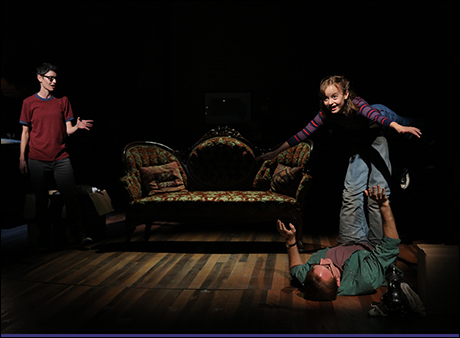 There is one thing that struck me immediately about the new musical Fun Home: the audience, which was unique. The lesbian couple to my left had never been to a Broadway show before (a point that they stressed repeatedly while we chatted before curtain), and the older gentleman to my right was a seasoned theatre patron who wanted to chat about downtown theatre. The two girls in front of me could not have been more than 21 years old. Was the audience filled with tourists? Not so much. Everyone felt like insiders – individuals who knew that they were in for something special that night. The buzz was primarily for two reasons: a) Fun Home opened off-Broadway last year to rave reviews and b) many theatregoers were familiar with Alison Bechdel’s work – the writer of the graphic novel and memoir Fun Home, upon which the musical is based. Bechdel is also well-known for the so-called “Bechdel Test,” which measures forms of gender bias in fiction by asking one simple question: does the work feature at least two female characters who talk to one another about anything other than a man?*

Fun Home is a glorious and moving musical about Bechdel’s childhood relationship with her closeted father and her own sexual awakening as a lesbian in college. The story is told from the point of view of present-day Alison, a self-defined “lesbian cartoonist.” Alison’s memory dictates the narrative, despite being incomplete – the plot accurately reflects the general uncertainty that plagues a person’s memory. Alison recalls what it was like to grow up in a pristine historical home that her father perpetually worked on perfecting. A façade, much like the sizable façade that her father bore on a daily basis with respect to his sexual identity. Alison also recalls spending time with her brothers in the family’s business at the “Fun Home” (i.e., a funeral home). As Alison grows into a young adult, she accepts and explores her sexuality with ultra-cool classmate Joan. Present day Alison comments on her life experiences, as anyone re-examining the past might do – deploring certain childish behaviors and fondly recalling others. She also contemplates her father’s not-so-secret relationships with men (some of whom were underage) and his subsequent suicide. In many respects, Fun Home is both a humorous and tragic tale of identity, relationships, self-awareness, and self-acceptance.

Crafting a subtle, intricate, and beautiful soundtrack that melds nicely with Bechdel’s story, Jeanine Tesori (music) and Lisa Kron (book and lyrics) should be commended for their work on Fun Home. From the opening number, Welcome to Our House on Maple Avenue, which highlights the well-manicured Bechdel family home, to the finale, Flying Away, nearly every note in the show rings true. Highlights include Sydney Lucas’ powerful and stunning rendition of Ring of Keys (when young Alison first notices a beautiful woman and tries to comprehend what she is feeling), and Beth Malone’s lyrical performance of the climatic song Telephone Wire when college-aged Alison nearly connects with her father. Nearly. It is simultaneously heart-wrenching and touching.

Director Sam Gold does an admirable job staging Fun Home in the round at the Circle in the Square theatre; although this staging does have drawbacks (a problem plaguing nearly every production that I have seen at this particular midtown theatre). When shows are staged in the round, actors are inevitably facing away from certain segments of the audience at any given time. In some cases, this results in dropped lines and dialogue when actors are looking away. However, David Zinn’s simple but appropriate scenic design takes full advantage of the space. Also, Ben Stanton’s lighting design, especially during certain whimsical dance sequences involving young Alison, is creative and fitting.

Musicals like Fun Home make me wish that there was a Tony Award for best ensemble because every member of the cast gives a noteworthy performance. Broadway veteran Michael Cerveris transcends all expectations as Alison’s father, Bruce. Cerveris’ Bruce is extraordinarily complex – sympathetic and charming, assertive and tentative. Because of the exquisite steps taken by Cerveris in crafting the role of Bruce, it is difficult to categorize Bruce as either a victim or a predator in society (even when he engages in questionable behavior). He is imperfect and struggling but, despite those difficulties, tries to maintain a polished veneer for society. It’s pure genius and a performance that Cerveris will undoubtedly be recognized for. Then, there are the show’s Alisons: Beth Malone, who looks remarkably like present-day Alison Bechdel, Emily Skeggs as college-aged Alison, and the rambunctiously talented Sydney Lucas as young Alison. Beth Malone narrates the play with a sharp wit and restrained inquisitiveness that is strikingly thoughtful. Her rendition of Telephone Wire is poignant and among the best moments in musical theatre that I have witnessed. Emily Skeggs portrays Alison at an awkward and uncertain stage in her life, which Skeggs nails with earnestness. Then there is Sydney Lucas. Broadway child actors often suffer from what I call “Annie-syndrome.” Children are expected to bound into the hearts of patrons with an adorable smile and a belting musical number. Not so for Lucas. Do not get me wrong, she is a very cute kid and is certainly energetic, but she can also act and sing at a level beyond her years. Ring of Keys, performed solely by Lucas, is an unexpected showstopper that highlights Alison’s sexual awakening and child-like uncertainty about relationships.

Musicals like Fun Home are a rare treat on Broadway, and by “like Fun Home,” I mean original productions that address difficult subject matters in a substantive and challenging way. It’s refreshing and wonderful to know that shows like Fun Home can attract producers and are presented to mainstream audiences who are more diverse than financiers and producers often give them credit for being. Fun Home is a musical that will resonate with anyone who has ever struggled with social identity, felt socially excluded for one reason or another, or grappled with a close relationship. In other words, with nearly everyone.

* Try it sometime with your favorite movie or television show. It is illuminating.