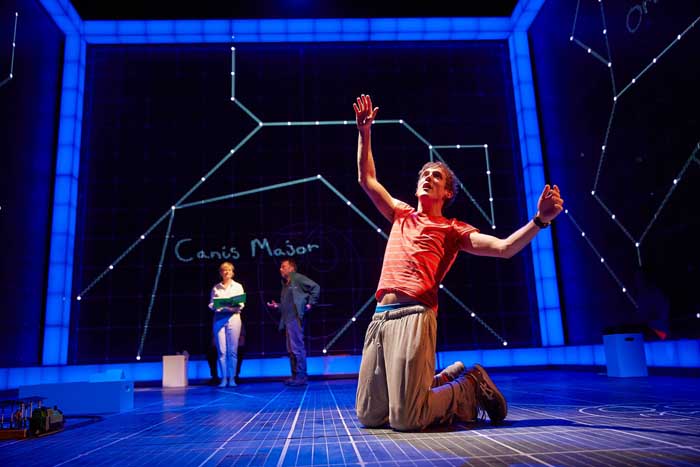 Curious Incident of a Mind-Blowing Play

“The dog did nothing in the night-time.
That was the curious incident.”
-Sherlock Holmes in Silver Blaze

The novel The Curious Incident of the Dog in the Night-time by Mark Haddon landed on my bookshelf back in 2003. As a junior in high school, Haddon’s fictional story of 15-year-old Christopher was unlike anything that I had read before. Specifically, the story is told from Christopher’s point of view, which in and of itself is fairly innocuous, except that Christopher presumably lies somewhere on the autism spectrum. He uses diagrams to explain occurrences, frequently jumps from topic to topic, and has a unique, analytic view of the world around him. In other words, Curious Incident is not a tale that screams “needs a theatrical adaptation.” However, after garnering critical raves and a handful of Olivier Awards, the new play stage adaptation of Curious Incident can now be seen at the Ethel Barrymore Theatre. After seeing the production, all I can say is this:

Curious Incident is a singular and stunning piece of theatrical art that you must see. The production is a visual feast featuring a superb young actor making his Broadway debut and has an impressive creative and technical team behind it. It is unmistakably one of the best plays that I have ever seen.

I will stop gushing for a second and start from the beginning. Curious Incident challenges audiences to look at everyday occurrences differently, through the eyes of Christopher Boone. As previously mentioned, while Christopher’s precise medical condition goes unmentioned, he appears to be autistic. He is a savant with respect to numbers (“maths”) and patterns, he strongly dislikes human contact, and he struggles to adapt to new and unfamiliar situations. To Christopher, unfamiliar places with many people are akin to a cacophonic symphony of sensations that he cannot shut out. The play opens with Christopher weeping over the body of a dead neighbors dog and immediately resolving to solve the dog’s murder by engaging in some Sherlock Holmes-inspired detecting. However, as Christopher attempts to unravel the mystery of the dog, he begins to discover more about his father and deceased mother – discoveries that challenge him to face those aspects of life that make him most uncomfortable. Discoveries that require him to be “brave.”

Stepping inside Christopher’s world is eye-opening, and Curious Incident sheds some light upon the struggles faced by family-members of individuals who fall somewhere on the autism spectrum. Scenic designer Bunny Christie, lighting designer Paule Constable, video designer Finn Ross, and sound designer Ian Dickinson had their work cut out for them when it came to crafting Christopher’s world, but this technical team, along with director Marianne Elliott, rose to the challenge. For example, Christopher is frequently overwhelmed and over-stimulated by lights and sounds, and the technical team deftly mixes dizzying noise with special effects (e.g., flying projections, strobe lights) to similarly overwhelm the audience. It becomes readily apparent that, aside from his teacher, no one really understands Christopher. His parents understandably struggle to cope with their sons’ behavior, his principal thinks he is unintelligent, and other people often get angry (some to the point of physical violence) or impatient with his actions. Christopher is an unlikely protagonist but a remarkable one.

To create Christopher’s reality, Christie adopts a relatively blank canvas for the set. The black set is covered in what looks like large graph paper. Small white boxes adorn the sides. To the casual observer, the set looks fairly simple . . . at first. However, the brilliance of the set soon becomes apparent. The grid permits Christopher to draw geometrical shapes and is an ideal representation of his formulaic view of the world. Chalk is used to draw upon the walls and floor, and the black backdrop permits the lighting designers to cover the entire stage in projected images and glowing lights. Props are hidden throughout the set – accessed by opening a “square” of the graph paper to reveal hidden rooms and cabinets. Plus the set moves. All of it.* It is perhaps the most ingenious scenic, lighting, projection, and sound design that I have ever seen on a Broadway stage.

It is undoubtedly a daunting task to bring Christopher to life. The role is both an intellectual and a physical challenge because, while Christopher rattles off mathematical formulas and chains of numbers, he bounds about the stage (and, at times, flies through the air). Not exactly the sort of challenge that one would normally thrust upon an inexperienced actor. Readers, permit me to introduce Alex Sharp. If you have never heard of him, I am thoroughly unsurprised. If you still have not heard of him two years from now, I will be thoroughly surprised. Sharp graduated from Juilliard in May and immediately found himself preparing for his Broadway debut in Curious Incident. Apparently he learned a thing or two at Juilliard because Sharp’s performance is brilliant. It would be so easy to portray Christopher as a caricature, yet Sharp’s portrayal is nuanced and rich. Ian Barford also does a nice job with the role of Christopher’s father – depicting the relentless worry of a father raising a child with unique needs to the angry outbursts of a stressed man with thoughtful precision. Additionally, although the character serves principally as a medium to tell Christopher’s story, Francesca Faridany aptly portrays Christopher’s kindhearted and encouraging teacher Siobhan.

I’d be remiss if I failed to mention that Curious Incident recently participated in a valuable Theatre Development Fund program called the Autism Theatre Initiative. The Autism Theatre Initiative is a unique program that offers opportunities for adults and children on the autism spectrum to attend special theatre performances. Curious Incident hosted the first autism-friendly performance of a play on Broadway. Not an easy task for a show that relies heavily on loud noises and bright lights, but certainly an admirable one.

*A trait used to remarkable effect in the second act of the play.