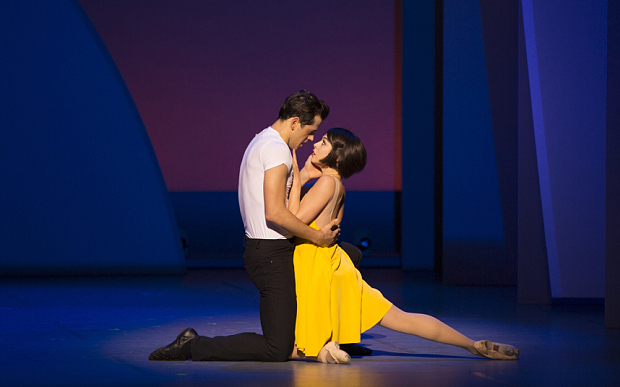 An American in Paris

An American in Paris is the story of GI Jerry Mulligan who, after WWII, decides to stay in France to pursue his dreams of becoming an artist. He meets fellow former GI Adam Hochberg at a bar where Adam writes and performs musical numbers with Henri Baurel, a soon-to-be betrothed young man with significant family wealth who longs to move to America and become a performer. Jerry quickly finds a romantic conquest in the form of an up-and-coming ballerina named Lise Dassin who has recently landed a significant part in a ballet company that is financed by Baurel’s family and a wealthy American producer and financier, Milo Davenport. From there, a tangled love story is born. Jerry, Adam, and Henri all claim to love Lise (they all happen to be involved with her ballet – how convenient). As Lise begins to grow fond of Jerry after a rendezvous by the river, Milo also becomes enchanted with Jerry and, under the auspices of introducing him to potential art dealers, persuades him to become her boy toy (a role he initially accepts). However, Jerry refuses to stop pursuing his love for Lise, despite her relationship with Henri, which leads to a climatic sequence where everyone’s intentions are exposed and decisions must be made.

The plot is rather fantastical and romantic, as movie musicals with Gene Kelly tend to be, which is a draw for some people and a turn off for others. I tend to fall in the latter category; however, there are aspects of the book that are intriguing. Lise often comes across as a porcelain figure – weak and in need of protection and/or direction – but her fragility is nicely counterbalanced by the characterization of Milo who is an independent and unapologetic woman with motivation to succeed (and who apparently has no qualms about trading access to her power and position for sexual favors). Moreover, one of the most interesting aspects of the show involves the depiction of life after war – each of the characters is suddenly faced with a vast world of opportunities in post-war France and the only restraints upon them are those that they create for themselves.

The music in An American in Paris merits little discussion – its classic Gershwin. From “I Got Rhythm” to “They Can’t Take That Away From Me,” the musical numbers are quite recognizable – even more so because Gershwin songs have appeared in several recent Broadway musicals, including Nice Work If You Can Get It and Porgy and Bess. Gershwin wrote a multitude of classic songs, but while I use to think “S’Wonderful” every time I heard a Gershwin number, now I just lament how overdone and cheesily outdated these classics really are.

No, the draw of An American in Paris is not the music. It is the dancing, which I am woefully under-qualified to properly assess. Director Christopher Wheeldon’s choreography is reminiscent of that in the 1951 movie, replete with Gene Kelly-esc solo numbers for actor Robert Fairchild, who portrays Jerry. The performers are strong ballet dancers, and they have a lengthy final ballet sequence in which to demonstrate their classic training (Fairchild is a principal dancer with the NYC Ballet and Leanne Cope, who portrays Lise, is a member of the Royal Ballet, so they have plenty of talent to display). Wheeldon replaces classic storytelling with wordless dance and has heavily woven ballet into every scene of the musical to beautifully showcase the poise, artistry, and athleticism of his cast. It is a visual feast – at least, it probably would be for someone who enjoys ballet.

Although novices on the Broadway stage, Robert Fairchild and Leanne Cope do a respectable job in their roles if for no other reason than they are talented dancers. Sure, Fairchild and Cope are less convincing actors during the scenes that require dialogue, but they are not much helped by Craig Lucas’ contrived dialogue, which often feels like it was plucked right out of the 1950s. Brandon Uranowitz as the sarcastic Adam and Max Von Essen as the adorably nervous Henri make up for Fairchild and Cope’s acting deficiencies with their relatable and humorous characterizations, and Jill Paice’s turn as the bold financier Milo is a respectable portrayal of a woman who is self-assured and capable of taking control of any situation.

An American in Paris distinguishes itself in a full Broadway season as a musical that embraces dance as a method of storytelling, but, perhaps, too much so for this theatregoer. For audiences who enjoys ballet or who have fond recollections of Gene Kelly’s movie musical, An American in Paris is likely to delight and captivate with its stunning choreography and simple tale of love and art. For everyone else, there are some truly excellent plays and musicals just a grand jeté away from the Palace Theatre.

*Yes, I appreciate the difficulty of ballet – the power and poise required to perform it well – but, despite that knowledge, I still find it incredibly dull.