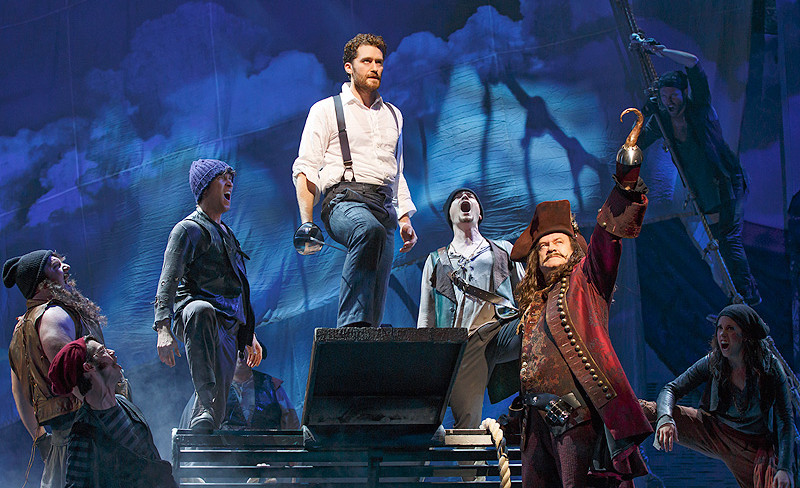 There is something universally appealing about J.M. Barrie’s ode to enduring childhood, Peter Pan, and the imaginary world of Neverland located “second to the right, and straight on till morning.”* A beloved children’s classic, my appreciation for Peter Pan started at a young age – as demonstrated by this Halloween picture from 1989 (with my pint-sized twin Tink). Barrie’s novel sits prominently on my bookshelf and next to my computer I have the framed quote “If growing up means it would be beneath my dignity to climb a tree, I’ll never grow up, never grow up, never grow up! Not me!” For me, like many others, Peter Pan is a timeless tale – a reminder of the carefree nature of childhood and the power of imagination. That tale has returned to Broadway as a new musical, Finding Neverland, which is a semi-fictionalized account of the relationships that inspired J.M. Barrie to write Peter Pan.

In Finding Neverland, Diane Paulus and her creative team have done their upmost to capture the spirit of Peter Pan. For those who missed the Johnny Depp and Kate Winslet movie by the same name, Finding Neverland tells the tale of J.M. Barrie (portrayed by Matthew Morrison) who, during one of his many walks through the park, meets widow Sylvia Llewelyn Davies and her four boys George, Michael, Jack, and Peter. Barrie befriends the boys and Sylvia and begins to write his next stage play, inspired by their playtime adventures. Barrie’s personal life is knocked off-course when his wife leaves him, and he faces social pressure as London’s high society begins to gossip about his involvement with Sylvia, who is rapidly growing weaker from a chest condition. It is through these trials, that J.M. Barrie discovers Neverland and creates Peter Pan.

From my perspective, there are two pre-requisites for all Pan-related plays: (1) a fairy must be saved through audience-applause, and (2) someone must fly. Finding Neverland does not disappoint with respect to either of these criteria, although Paulus and playwright James Graham make the audience wait quite a long time to witness these signature events. One thing that the creative team does not make the audience wait for is Tinker Bell. Utilizing an ingenious and delightful mechanism, Tinker Bell flies across the audience and stage at the very beginning of the show, and fairies land in the hands of many cast members throughout the production. It’s a trick that should make even the most serious of adults crack a smile.

James Graham’s book loosely mirrors the plot of the movie Finding Neverland, although many of the subtle nuances and charms of the movie have been eliminated in the more family-friendly (but less engaging) musical. Ignoring the issue of historical accuracy (the book strays significantly from real life events), there are notable differences between lead characters in the play and the movie. Barrie’s American producer Charles Frohman (Kelsey Grammer) has a significantly larger presence in the play both in his role as Barrie’s friend and producer, and as the powerful Captain Hook. Also, the character of Sylvia Llewelyn Davies (Laura Michelle Kelly) is more playful in public than her movie counterpart. Sylvia often ignores the rules of public decorum altogether in favor of running around with her boys as a playtime partner – not a parent. Her flippant attitude is a bit difficult to accept, given the historical context. Some of the new characters written for the musical are, unfortunately, also the least compelling. For example, the fictional actors who comprise Frohman’s theatre company are ghastly caricatures of real people – caricatures that grow tiresome.

The music in Finding Neverland is generally tuneful but forgettable, and occasionally it takes a nosedive into the genre of pop music. Gary Barlow, who composed the music alongside Eliot Kennedy, is a member of the UK boy band Take That, which explains the unfortunate pop vocals. Many of the lyrics are trite and songs are filled with one-liners that are best left unanalyzed. That is not to say that there are not successful musical numbers. The intermission song Stronger, accompanied by exuberant choreography and brash staging, is among the best of the show, and the title song Neverland is an earworm that I have been unable to shake since I saw the production. However, there are also numbers like We Own The Night, a fantastical and absurd jaunt through the world of make believe, which feels like a plot detour and nothing more.

Pardon me for saying (and plug your ears Gleeks), but I had almost forgotten that Matthew Morrison is a talented stage actor after all those years that he spent on Glee singing poorly arranged cover music. In Finding Neverland, Morrison is a solid vocalist and performer, as well as a striking leading man, who maintains a believable Scottish accent throughout the show. He also connects with the younger actors in the cast in an authentic way, both as a playmate and as a paternal figure. Kelsey Grammer is surprisingly entertaining as Frohman and as the imposing Captain Hook – with the exception of one particularly bad reference to the television show Cheers that Grammar milks for an annoyingly long time, his performance was undoubtedly my favorite. All of the actors who portrayed the Llewelyn Davies boys performed their roles admirably with an enjoyable level of energy and skill, and Carolee Carmello makes the most of her small role as Sylvia’s mother.

Ultimately, Finding Neverland is not the artistically-creative, visually-stunning, and refined Broadway musical that I dreamed it would be, but it has its charms. Some professional critics will likely ridicule the gimmicks employed to gain audience support, including the integration of a glittering Tinker Bell and a flying Peter Pan, but these whimsical touches were not lost on this Peter Pan fan. Nor do I think that they will be lost on general audiences or children. Not every musical must be ground-breaking. Sometimes, a little magic, a little fun, and a beloved story are sufficient to strike a chord with a theatregoer. As for this theatregoer, Finding Neverland made me smile and, when it was time to publicly affirm my belief in fairies, I clapped right along with the rest of the audience.