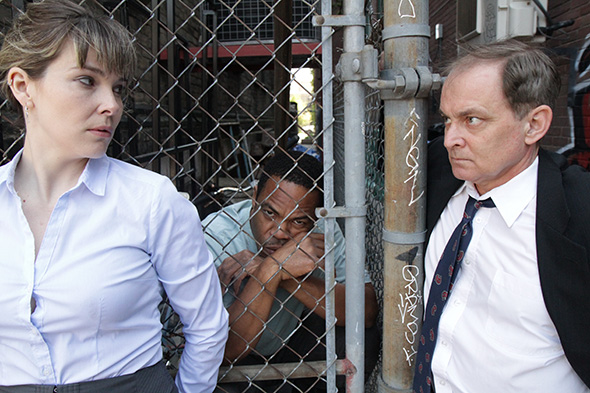 Check out our Full List of Fringe reviews HERE and see below for my report from my first day of shows at the Toronto Fringe Festival.

Tachycardia (C-)
The first show on my Fringe schedule fell victim to that very Fringe-y problem of artistically indulgent accidental silliness. Nadine Bhabha and Joel Edmiston begin the play with duelling monologues depicting the giddiness of a new relationship. They make a lovely couple; if only there were more opportunities to watch them be one. The wallowing begins almost immediately as El (Bhabha) and Hal (Edmiston) are led by a comically dramatic Woman in Red (Maite Jacobson) through a physicalization of the hurt they impose on one another. It’s an intellectually intriguing idea but, since we spend so little time getting to know El and Hal and even less time watching the hurt happen, emotionally it amounts to very little. A true dance piece about the physical anguish of heartbreak or a straight play about the common but lasting ways we hurt the ones we love might have more effectively conveyed writer/director Rebecca Gismondi’s point (or at least what I think her point must be).

Lwam is Eritrea’s Greatest Hockey Player (B-)
The first thing you need to know is that Lwam Ghebrehariat is a wildly likeable performer. He begins with the completely unoriginal joke of “you may be thinking- what’s a Lwam? I’m a Lwam!” and I’d bet money you fall for him on the spot. Since this solo show is essentially just a standup comedy routine about everything from Lwam’s parents to his apartment to what he looks like with a beard, it’s key that you like Lwam. And since you WILL like Lwam, half the battle is won before the show even really gets underway, which is a good thing because, if the rest of his run is anything like opening night, the show will be pretty shaky. A good half of the jokes fall flat or flatter than desired (including his chosen “closer” which is too dated to make the splash he’s expecting) and the clearly nervous performer lost his place countless times at his first show. Most people would have tried to cover up their mistakes but Lwam went the other way- he owned it, fessing up to getting lost in his own storytelling and making a show of his tick of recapping what he’s already covered in order to figure out what he’d missed. It’s a risky strategy and one that, ideally, he wouldn’t need to use at all, but if you’re as charming as Lwam, you pull it off just fine.

Potosi (A+)
There are few guarantees at the Fringe; the lottery system makes the whole thing a crapshoot. But the number one reason a show fails is a weak script so, if there’s a safe bet to be found, it’s most likely in the form of the Fringe New Play Contest winner. Past winners include Kat Sandler and Ins Choi so Alexander Offord is in good company as this year’s pick. His play Potosi does not disappoint. In fact, it far from disappoints. Offord’s crisp, witty dialogue is uniquely defined for each of his three indelible characters. Sean Sullivan’s downtrodden middle manager Beamish transitions from captivating, slick avoidance to trembling desperation with the fantastically detailed rhythms of a man leaning on the lies he tells himself and others (Sullivan is profoundly engaging in every moment but especially when delivering Offord’s thrilling dictation monologues) while Nicole Wilson’s powerful LeBlanc speaks in harsher, slower and more consequential patterns. Wilson is brilliant as the morally mercurial suit whose gender puts her in grave peril when she and Beamish are taken hostage during a civil war in the country their Canadian mining corporation has been exploiting. The superb cast unlocks all the complexity, humanity, depth and humour in Offord’s spectacular tragedy, delivering that rare phenomenon- a Day One homerun.