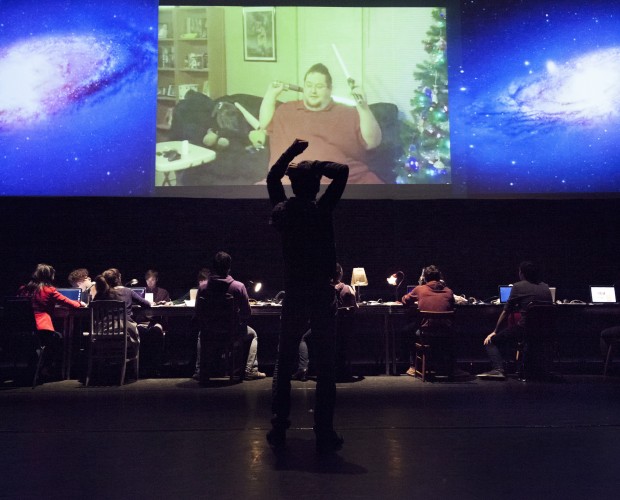 After seeing a total of seven productions at this years SummerWorks theatre festival in Toronto, I decided to grade my reactions on an ascending scale. This began with two shows that somehow either went over my head or never really near it at all: Show and Tell Alexander Bell and Entitlement in Part 1, followed by much stronger praise for Late Company, Delicacy, and Tender Napalm in Part 2. Now for Part 3, the two that you definitely missed out on: How Can I Forget? starring Sook-Yin Lee and Benjamin Kamino and iShow produced by theatre collective Les Petites Cellules Chaudes.

Being one of Canada’s hippest citizens for long over a decade now, Sook-Yin Lee is known for many things. She is a musician-filmmaker-artist-actress-radio/TV host and has performed notable roles in both Shortbus(2006) and Jack (2013). For a certain generation, she’s fondly remembered as one of the veteran MuchMusic VJs (back when that was cool). Currently, she hosts CBC radio’s Definitely Not the Opera. Her inspiration behind the making of How Can I Forget? came after the arduous shoot of her recent film Jack, in which she played Olivia Chow – Toronto politician and wife of the late Jack Layton. While playing the role of a real person, Lee claimed to have edged on loosing complete sight of who she was or what she thought about her past. This technique of character immersion did not treat her too nicely, so Lee vowed to work on a piece that would study these effects. The result: a fun, evocative, balanced and artful musing on the ideas of memory, trauma, identity and the self. Given her professional repertoire, Lee is highly regarded amongst public audiences. Her unusual comfort in front of others (or perhaps her unusual willingness to be open in front of others) is a strength that she doesn’t use sparingly. Lee has oddly never revealed her actual age yet is more than comfortable to masterbate in films or go totally nude in plays. In thinking through her career, I think the general point she’s aiming at is not exhibitionism, but openness, pride and sharing. The credit I give to her is not for shocking people with the topic of sexuality or the sight of a naked person. Instead, I think Lee would rather people realize how mundane these things actually are and how limiting the reach of our knowledge with taboos can be utterly pointless. A lot of this comes through in How Can I Forget? (also helmed by co-conspirators Benjamin Kamino and Adam Litovitz, who shared with her their position as this year’s SummerWorks artist-in-residence.) In a stellar, intimate collaboration, Lee’s authentic package was delivered to audiences during SummerWorks with captivating finesse. My only criticism during the performance was completely debunked by the end, so it’s hard to come up with any criticisms at all. The first half of the play is very “performance art” heavy. It had all the poetic dialogue, awkward dancing and dream-like multimedia projections that you would expect. This was very pretty and had a very “high-art” tone, but cruised blissfully into a stratospheric level of self indulgence. Had it ended there, it could have almost came across as some kind of parody. But it did not end there. In a single moment the production took a new turn that was refreshingly and pleasurably self-aware. The lights went out and then turned on. Lee and co-star Kamino, microphone in hand, reappear in two chairs – Kamino playing a journalist, Lee as herself. The dialogue that followed amusingly reenacted Lee giving direct answers about how strange, explorative, new, and admittedly super artsy her foray into theatre has been and how dependent she has been on her co-collaborators. Far from propagating the aura of a “jack of all trades”, Lee expresses herself as a simple and regular but curious person – and curiosity isn’t any unique talent, it is a reflex and capability we all have. The only thing that separates her creativity from our own, is her desire to explore it and share.

iShow was another impressive experience of exploration and sharing, this time in the digital realm. It was also the furthest, most creative demonstration I have seen thus far of what a ‘theatrical play’ could be. I am also deeming it as the best production I saw at SummerWorks this year. You could say iShow ‘broke the fourth wall’, but it also went on breaking the fifth, sixth and infinity walls of screen-based media and online interaction. The premise: to examine the relationships we conduct over computer screens as well as the nature of our relationship to screen-based content itself. The on-stage direction revolved around the familiar sight of a group of twenty-something youngsters glued to their MacBooks and seated around a large table. Above them hung a gargantuan sheet that featured projections of a rotating selection of three of their laptop screens. A series of short acts ensued – some silly, some funny, some serious, and some downright strange. What felt exciting as an audience member was the live online interactivity that the iShow actors were forced to contend with and play against. Using free online sites such as chat roulette (a website that randomly connects two users, anywhere in the world, into a text or video based chat), the actors found willing participants to engage in the performance through various means. Some were asked to tell secrets, while others were asked to read lines out loud for a comedic skit. The ways in which this could play out are easily imaginable, but throughout the production the concept was taken further and further. An iShow actor is Skyped in, absent because of a family emergency. She later appears onstage, challenging our credulity over web-based conversations. At first, the actor spoke about being in a far away city, but when she appeared in person it was clear that she was only Skyping from backstage. Conversations are also explored through text when the audience was presented with an SMS ballet of sorts about the Norway tragedy in 2011 where a homegrown right-wing extremist murdered over 70 people, most of them teenagers, at a summer camp located on the small island of Utoya. As the left and right screen displayed a conversation between a mother and her teenage daughter hiding in the rocks during the massacre, the centre screen revolved around a google satellite image of the island. The physical distance and emotional connection was felt, along with questions about the authenticity of the conversation itself. The use of plain text and google imaging was itself an interesting and beautiful application of the digital aesthetic. The production could have gone on with a captive audience for hours, seemingly. In fact, I can easily see iShow thrive in a museum setting with the actors performing under their laptops and projectors all day long. This would be an excellent production for an institution like the AGO to house for a durational performance, adding much needed youth relevance to their curatorial program.

All in all, going full-on into the SummerWorks schedule with as much free time as you can afford is something I wholeheartedly recommend. At worst, you’ll be entertained – at best, you’ll be blown away. There’s something for everybody in their programming and if you engage in any Toronto theatre experience, this is the one to attend. Forget TIFF and TIFF’s lines (just wait for the theatrical or DVD release). This is a festival that everyone should show up for.