Emily, Her Boyfriend, and Some Other Guys 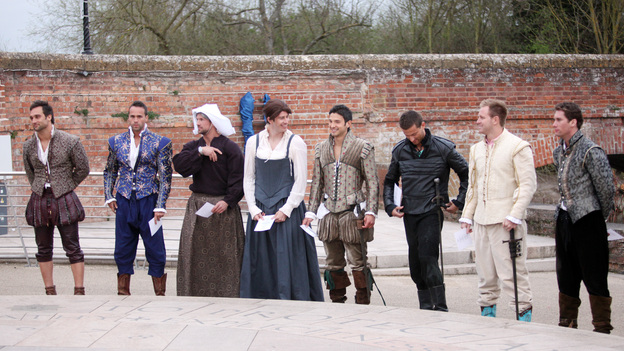 Ladies and Gentlemen, today is Monday. An early summer Monday. That means one thing- It Is Bachelorette Day! For some unholy reason, I look very very much forward to Bachelorette day. Please suppress your groans.

The annual My TV Bachelor Scale is one of my favourite articles of the year. Sure, the Award Nominee Interview Series is exiting to do and full of big name insight, but it’s a lot of work. Yes, the awards are fun to give out and I thoroughly enjoy grading shows in their Season Wrap Up. But Nothing has the perverse fun of literally ranking cute boys from awesome to horrid on a colour coded scale. Nothing, that is, except the amazing Spring/Summer adventure that is The Bachelorette. The Bachelor and Bachelor Pad are just the trashy, annoying cousins that you put up with so that you will truly understand the beauty of The Bachelorette when it finally airs. If I had never suffered through Brad’s horrific (Second!) season of The Bachelor (seriously, could they pick less likable guys for the main event? I don’t think they could if they tried), not only would I have lacked the insight into Ashley that I needed to understand how long it took her to latch onto the obvious awesomeness of JP, but I would not have been fully prepared for the Emily Maynard extravaganza that was to follow a year later, undermine Ashley’s season and give voice to all her “I’m sorry I’m not Emily!” fears.

Having suffered through Brad picking the pretty angel girl even though second-place Chantal was clearly a better choice for him, and watching their subsequent speedy breakup, I didn’t dislike Emily but I was pretty sure her long-awaited, highly anticipated season of The Bachelorette would be really boring. She’s too flawlessly beautiful, she’s too sweet and decently smart and seemingly well-intentioned and easily beloved by men for this season to be anything but a heaven-on-earth lovefest. But it turns out, Emily Maynard is damn fun. She’s easily the most outspoken Bachelorette in years, actually telling Chris Harrison the truth in their “deliberations”, admitting to an enigmatic but less unattainably handsome bachelor that she’s afraid he doesn’t like her as much as she likes him, this week she even told one guy to “get the fuck out”, which was Awesome. I mean, I’m pretty convinced the Kalon issue was mostly overblown considering Emily’s made such a stink about how people see Ricki that at this point most of the guys are actively pretending it’s not even a mild inconvenience for them to all of a sudden have a 6-year-old daughter, but it was still Awesome. Reality show people are famously defensive, dramatic, and inescapably hyperbolic with their adjectives, which is how you end up with people like Survivor “villain” Russell lumped in with people like Survivor Villain Colton. That’s what happened with Courtney last year– they didn’t like her, so they called her names and when she reacted badly to being ostracized and attacked, that fed their story. Having sat through poor Ashley’s experience with Bentley last season, it’s amazing to me how viewers can’t seem to differentiate flat out cruelty from the foot-in-mouth tendencies of Kalon. He can come off as a jerk, but Bentley’s a villain. Anway, I digress. The way Emily handled the whole thing was feisty and hilarious but also defensive and weird and most likely a trick of editing- (how on earth is it Arie’s fault all of a sudden?!)- But we’ll get to that in a moment.

What I’m trying to say is that Emily is way more interesting than she seemed on Brad’s season, not because we’re seeing more dimensions of her motherhood or sides to her tragic history, but because we’re seeing that she’s an actual person. She gets disproportionately mad and defensive (as she has with both men who have accidentally told the truth about their feelings on immediate fatherhood so far this season), then amazingly self-conscious (she is so afraid of Jef- it’s baffling!), then she makes terrible decisions (why is Ryan still here?!). But the next minute she’ll turn all that around and be self-aware and decisive and entirely more savvy about the Bachelor-ness of this whole endeavour than her predecessors. She may look like a Barbie doll and come off like an angel at first glance, but I just saw Emily Maynard threaten to “go all backwoods West Virginia” on some guy’s ass. Cause she’s cool/weird/funny like that.

Emily has an odd crop of boys to choose from this year. Most seasons I have maybe 1 or 2 that I can’t stand (who are usually gone by this point) and 2 or 3 who barely seem to exist. Then there are the obvious frontrunners. And, because I’m a schmoopball, I usually agree with our smiley heroine and have been known to predict the top 4 down to their departure date (I had my finger most firmly on the pulse of Ali’s excellent group of guys). There are of course Bachelorette lapses of judgement (Ben was WAY down my list for Ashley) but I usually don’t have to really differentiate between “this is who I love and hate for Emily” vs. “this is who I would love or hate to run into on the street, befriend or have propose to me on some random tropical island on national television”. This year, for the first time since I tuned back into The Bachelorette in time for Jillian’s season (after a long post-Trista hiatus), I’m not really that into these guys. I like Arie, Sean and even Jef (sometimes), but there is no JP this year, no Reid, no Frank, no Ed, no Roberto, not even a Constantine for me to “get” even though my best friend thinks he’s not cute enough for the show. Anyway, since (despite this week’s producer-intervened events) this season has basically been about Emily and her boyfriend Arie navigating the perils of having lots of guys around all the time, I thought this one slightly-more-threatening week would be a good time for The Bachelor Scale, before tonight’s most-likely-formulaic offering.

Let’s start at the bottom:

Ryan- Ew. Gross. Why?!?! Emily keeps saying ridiculous things like “he’s so unbelievably handsome” about guys who are not actually all that handsome. It’s fine when she says that about Chris (who is fox-faced, but not in a bad way) or Sean (who is making me rethink my stance on not being into blonds), but Ryan?! What are your criteria here, Em? Sure, he works with kids, but that should alarm you more than intrigue you- what is he teaching them?! Ryan is the competitive, disrespectful blowhard of the season and there’s really no getting around that. He’s on a much higher jerk level than this season’s edited “jerk” Kalon, and not as well dressed.

Doug– He seems fine. Except he doesn’t. Doug is all single-dad nice-guy polish (he was the one to rat out Kalon for saying something we never heard him actually say, and thus was the only guy to escape the wrath of Emily’s misguided “why didn’t you stick up for me” inquisition). But he has major defensive anger issues. Almost every altercation in the house so far has involved him. Now, he’s usually on the victim/hero end, or at least presents to be, but boy has confrontation issues and is not long for this season.

Travis- He’s super southern and carried an egg around for the first 3 weeks. Travis is decently funny and not offensive in any way (so long as we’re not prosecuting based on dialect. Or limo-exit strategies) but I’m not in any way fond of him either.

John- Okay, so his nickname is Wolf, which is super stupid, but he seems like he might be an alright guy. Jury’s still out on John.

Chris- Like so many others, Chris is massively defensive. His hangup is that he’s only 25 and wants to prove that he’s mature enough for Emily. Trick is, if he hadn’t disclosed his age, there isn’t a soul on or watching the show who would have taken him for anything less than 30. He’s also one of the more attractive guys and seems sane and acceptably smart/fun. If he can calm down a bit, Chris could be a favourite.

Jef- The “personality” of the season. The Michael Stagliano who the audience adores and Emily takes to the top 3 or 4 but certainly doesn’t marry. Age is really truly just a number, since apparently Jef has at least a couple years on Chris yet still dresses inappropriately casual for every occasion and regularly rides a skateboard. He’s CEO of a bottled watter company, which sounds improbable on paper and presents awkward homebase conundrums should Jef miraculously sneak past Arie in the race for Emily’s heart, but he’s cute and sweet and by far the best spoken of the remaining men. Jef’s one-on-one was one of the most engaging on his charisma alone (I mean, he didn’t have Dolly Parton, which was a real obstacle) and I have a suspicion he’ll make if further than his type usually does (he may even be runner-up material), but Jef is an audience-favourite cool kid, not Ricki’s new stepdad/Emily’s romantic finale proposal organizer.

Sean- My unexpected favourite. Well, sort of favourite. Not really. He’s a little too down-home religious-y for my tastes, but Sean is so effortlessly charming that he’s got me loving the guy who I normally wouldn’t be paying much attention to (my real life self goes for a Jef or an Arie I guess or, sometimes, a Kalon). Sean is funny without being hammy and heroic/loyal/sweet without showing that off and generally just more overall appealing than most of the guys this year (who are, annoyingly, not the show’s best bunch). Sean is super great and would make the perfect husband for Emily. If only she were nearly as into him as…

Arie! The winner of the affections of the most desirable Bachelorette in franchise history. Arie got the third date of the season (or was it the fourth?) and from that moment on has been Emily’s boyfriend. She walked through a few one-on-ones before him (and even kept a couple of the guys from them), but something clicked on Arie’s date and they were set and every date since has been just filling time until Emily and Arie see each other again. The same thing happened with Ryan in Trista’s season and Roberto on day one of Ali’s- they picked their guy then went through the paces. Sure, Jef and Sean are sort of in the running, but when Emily is upset, she finds Arie to comfort her; when she’s excited, she finds Arie to share her excitement; when she’s disappointed in the world at large, she takes it out on Arie because she holds him to the insane standards of someone you like more than you like everyone else (ie: this week’s highly edited insanity). He lost some points with me when he didn’t know basic Shakespeare anything, but for the most part Arie is quick-witted and fun and generally awesome. I like that he’s not the most picture-perfect guy in the house and I like that he keeps his diary sessions interesting with classic lines like “Doug Angry. Dough SMASH” and, mostly, I like that he’s Emily’s boyfriend. Because he’s the right choice. All these other guys will surely enjoy their time on Bachelor Pad.

The Strange Things You Can Learn From "Bachelor Pad"
Every Rose Has Its Thorn
Love and Hate: The Men of The Bachelorette