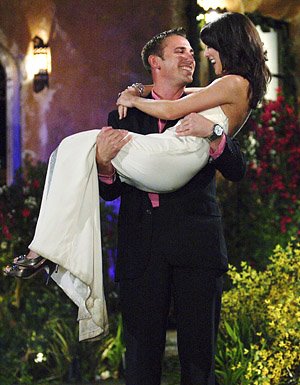 Separating the Men from the Boys

Tonight’s episode of The Bachelorette (the trash TV that is tiding me over until my beloved Big Brotherreturns to CBS) featured some intense drama, some serious tears and much talk of “real men” and “cowardly boys”.
With the surprising departure of Mike (who I was convinced was a front-runner), the continuing charade of Wes the Oscar winning woe-er, the multiple tattle-tale sessions, the controversially cancelled cocktail party and the dramatic rose ceremony, the remaining bachelors moved up and down considerably in my estimation.

In an appropriate move amidst uncertainty that all the men are single, Jillian said goodbye to slightly smarmy (though, I still maintain, well-intentioned) Juan and the horrifyingly aggressive David. This left Wes as the only villainous man in the running. Though Tanner P isn’t my cup of tea, he’s not an actually bad guy, so the field’s been narrowed to the decent and the lovely (with a few glitches left in there for dramatic effect).

As of tonight, my favourites are as follows:
-Michael (I can’t wait for this earnest and energetic sweetheart to finally get a one-on-one with his self-proclaimed “crush”)

-Jake (I’m sticking by my first favourite, even if he does think he’s a little too perfect)

– Kiptyn (If this week’s low-key date proved anything, it’s that the Jillian/Kiptyn chemistry is close to flawless)

Ed, Jesse, Mark, Reid and Robby still need to distinguish themselves a bit more but I started to see potential in Mark and Reid for the first time this week.