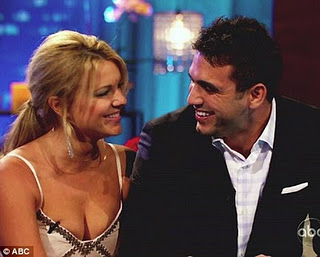 This was a big year for the Bachelor people.

It kicked off with Jake’s controversial and super-cheesy season The Bachelor: On the Wings of Love (‘nough said). A fan favourite from Gillian’s Bachelorette season, I will admit that even I liked Jake going in. But the more I got to know him, the more annoying he got. Quick in his decision-making, Jake swiftly whittled his choices down to the over-processed girl no one liked (Vienna), the over-the-moon obnoxious Disney princess who insisted on “dancing the dance that’s in [her] heart” (Tenley), the actually really tolerable swimsuit model (Gia) and the judgmental “it” girl who irrationally bitched at poor Vienna (Ali). So, of these “lovely” choices, our not-so-beloved Ken doll bid adieu to Ali when she left him to save her job (good move in my books), broke Gia’s heart (terrible move, but good for her) then shocked the world, made me kind of happy and doomed himself forever when he picked Vienna to propose to. I liked that he picked the girl he liked best, even if no one understood why. It showed a strength of character that I found admirable. Of course they wouldn’t last (they broke up in June), Tenley was much better suited to his formulaically “sweet” ways, but I liked that he had the balls to pick her. Jake then went on to Dancing with the Stars and became a national joke from there.

Next Up: Jason and Molly’s Wedding. In the most unexpected turn of events in recent Bachelor history, Jason Mesnick and Molly Melaney actually stayed together. Not only did the much-reviled former Bachelor and his former runner-up stay together, they actually got married- marking the second wedding in almost 20 seasons of the Bachelor/Bachelorette franchise. The wedding aired on ABC in a special Bachelor 2 hour event, and like all the great reality show weddings-made-to-air (The Bachelorette‘s Trista and Ryan, Survivor‘s Amber and Rob) it was beautiful. An inconvenient rainstorm actually made the whole thing so much better for me. A Melissa fan through and through (Mesnick’s famous winner/reject), I’ve always been iffy on Jason and Molly, but the way they laughed and muddled through even as the skies opened up on their outdoor wedding was pretty great.

Late spring brought the premiere of The Bachelorette. By late spring most of the legit scripted shows are off the air, summer is coming and I’m really looking forward to The Bachelorette; which I always prefer to The Bachelor. I generally like the guys on show (well, there’s always at least a couple good ones) but the girls are usually pretty vile (Jake’s season was the WORST); hence, though I don’t usually like the Bachelorette herself (I’m talking to you Gillian), The Bachelorette usually has more people for me to like (read: more fun boys and fewer horrible girls). This season was a strange one. Coming off of Jake’s season, I couldn’t stand Ali Fedotowsky (the girl who quit the show then got asked to be the Bachelorette- huh?). I thought she was a bully (though I will admit that she’s the prettiest girl on the show in years). But on her own season she was actually pretty darn great. Not only did she have one of the best casts of boys in a long time but she generally comported herself well and made all the right elimination decisions (except losing Chris from Vancouver so unceremoniously- he was sweet). She was a little defensive and crazy at times (her handling of the Frank thing was ridiculous) but she was also feisty (her handling of the Justin thing was awesome) and compassionate (her dismissal of Chris L was very kind, even if the producers didn’t like it). So, a great Bachelorette makes for a great season (I’ll admit it, I was wrong about her, she turned out to be a REALLY great Bachelorette)- add some serious drama (there’s a “dangerous” guy in the house who threatens the others! the guy with the broken leg is in it for the publicity! the crazy stalker guy got a tattoo for her! one of her favourites is leaving for his ex-girlfriend! oh my!), awesome dates (The Lion King?! Really?!)  and some truly great guys (LOVE Kirk; Robert’s too good to be true, but is; I stand by Frank; Chris L was truly lovely) and that was a simply awesome season. Also good to note: while Ali had to give up an entire half episode of her season to an irritating interview with Jake and Vienna after their predictable breakup, she and her fiancee Roberto are still going strong (and I think will be for awhile).

This was soon followed by something that was either a great idea or the first sign of the apocalypse: Bachelor Pad. So after all these seasons finish with “happy couples”, there’s a giant pile or rejected good-looking people just looking for new people to makeout with on national television. Apparently Bachelor cruises are a big hit with former contestants and post-show hookups aren’t at all uncommon. So, naturally, the producers decided to let us in on the action. Within the Bachelor-society there’s quite a bit of drama and Bachelor Pad was happy to hand it to us. They took a bunch of the worst people ever to be on the show and dumped in the famous Bachelor Mansion to compete for prize money and play with sexual tension. Sometime between them being dumped by various Bachelors and Bachelorettes and the premiere of Bachelor Pad, Natalie (Jason’s season) had befriended everyone on the planet, Nikki (also Jason’s season) had slept with Juan (Gillian’s season), who never called her back, Tenley (Jake’s season) had started up a flirtation with Kiptyn (Gillian’s season) and Jesse Kovacs (Gillian, again) had played crazy games with the heart of crazy floozy Elizabeth (Jake, again). Throw them all in a house with a couple new additions (hot and kind but immature Jesse- Ali’s season; the show’s all-time villain Wes- Gillian’s season) and make them play twister, win dates and play spin the bottle you’ve got the most disgustingly fascinating show in awhile. It was putrid, horrible, heinous. But Natalie and David rose up as brilliant strategists, Wes redeemed himself and found “true love”with the earnestly lovely Gia and the whole thing ended with a prisoner’s dilemma for Natalie and David to split or keep the money. All tolled, as far as loathsome things go- I kind of really enjoyed Bachelor Pad.

So next up is Brad Womack-again. The former Bachelor who picked no one the first time around will start his second go on January 3rd. I didn’t watch his season but this doesn’t sound very promising. But then again, as a whole, The Bachelor (and its many relatives) had quite the 2010.