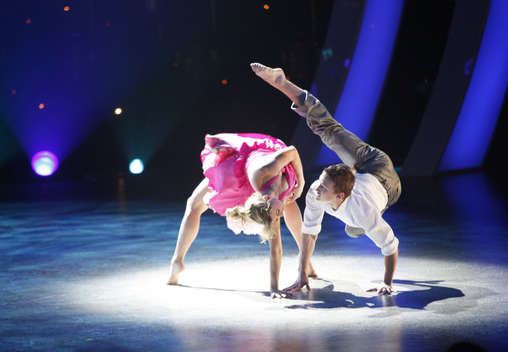 Good and Bad This Week

– SYTYCD‘s earnest (annoying?) farmboy Kent is engagingly mature, almost (dare I say it) sexy, this week in a smooth Dave Scott hip hop with Comfort and a beautiful Travis Wall contemporary with Lauren.

– Big Brother returns with a cool new twist that’s nowhere near as stupid as last year’s high school theme. The rock star/mensa member takes off as a My TV early favourite.

– Brian Voltaggio (among others) reminds Top Chef viewers of the high standards contestants can meet.

– My favourite female dancer in SYTYCD history, Katee,  returned this week to dance a wonderful Broadway routine with Billy.

– Hot in Cleveland is funny, nostalgic and a hit on TV Land’s first attempt at scripted series.

– All the right people keep getting eliminated one by one on True Beauty until only the tolerable remain (go Taylor!)

– Faith Prince reprises her role as Jane’s mom on Drop Dead Diva in a lovely and moving episode that had Jane singing again.

– The reason Katee came back to dance was because the amazing All-Star Allison hurt her ribs.

– The Bachelorette wasted half its episode on a pointlessly juvenile breakup interview with Jake and Vienna (artfully mediated by the excellent Chris Harrison) instead of giving us more time with Ali’s wonderful remaining men like Roberto, Kirk and Frank (for whom previews show the days are numbered before he becomes the season’s third major villain).

– There aren’t very many episodes left of the superb fourth season of Friday Night Lights.

and (the most traumatic by far)

– Alex Wong, by far the most interesting, most sympathetic, most engaging, hardest working dancer on So You Think You Can Dance this year (oh, and the single greatest dancer the show’s ever seen), was injured this week and taken out of the competition. If he does not return next year my heart will surely break.