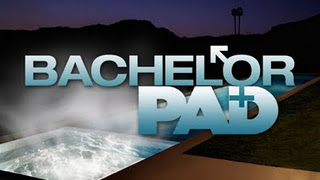 As we learned last summer, Bachelor Pad is a grimy, low-rent ick-fest that is very very difficult to turn away from. So when the casting for the second season was announced this week, I was shamefully excited. They went for the occasional dramatic but boring pick (obnoxious Melissa from Brad’s season) and a couple people I’ve never heard of, completely can’t remember or super don’t care about (Graham from DeAnna’s season, Erica from Lorenzo’s,  Ella from Jake’s and Alli from Brad’s).

Then there’s the possibly fun/possibly heinous and time-consuming prospect of having all sorts of built-in drama in the house. First of all, we’ve got the unpalatable Jake Pavelka, his high-strung former fiancee Vienna Girardi AND her bat-shit new boyfriend Kasey Kahl (of “protect and guard her heart” infamy). Throw in Justin “Rated R” Rego and the fact that everyone hates him and we’ve got a ballgame (though I’m quite convinced he’ll prove this season’s Wes and end up pretty likable- but that’s just a guess). There’s also some chick I’ve never heard of named Holly who apparently just broke off her engagement to…

Michael Stagliano!! That paragraph break is there because, though his ex-fiancee’s casting qualifies Michael for the previous category, this is the place for celebrating the inclusion of some of my absolute favourite former bachelors and bachelorettes, the most notable of whom is adorable puppy dog Michael. There’s also the lovable but overlooked Kirk from Ali’s season of remarkable prospects, grounded Jackie from Brad’s terrible season and the return of one of season 1’s best players Gia Allemand (who has terrible taste in men but is otherwise kind of really likable). None of these people should be spending their time on such a deplorable show, but I am super excited to watch them!

Then there’s my pick for this season’s breakout star: crazy ass Michelle Money, the mascot of the worst season in recent history (Brad’s). It’s still possible that she’ll be insufferable, but I think Michelle will probably be all kinds of entertaining and ultimately who I might root for. She’s smart and mature when she’s not teetering on the edge of sanity. And last year my favourites turned out to be people I’d despised when they were on the main show. I’ll love her or hate her, we’ll see.

The final 3 male spots will be filled out by guys from Ashley’s current season. I’m hoping they’re the middling sort (maybe Blake or one of the Bens, even masked Jeff would be okay- but please no Bentley!), no one I hate but certainly not someone I love. Because going on The Bachelorette is one thing, maybe they were nominated by their little sister and thought “hey, why not?”. But Bachelor Pad is a-whole-nother sleazy level of decrepitude and I’m holding out that JP and Ames just wouldn’t fit in.