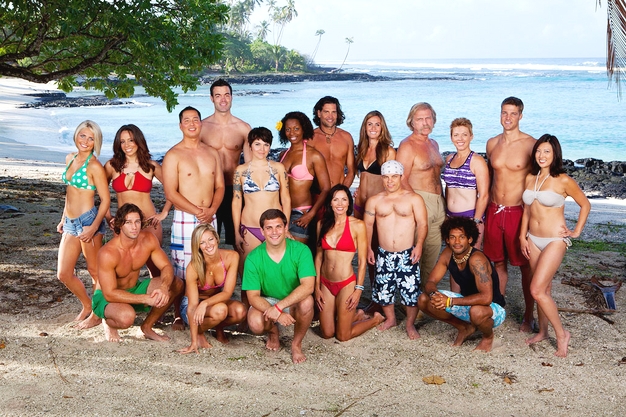 The Most Hate-able Cast Ever?

Contrary to popular opinion, I’m not actually that picky… at least not when it comes to reality TV. I’ve backed crass construction workers and ditzy pageant queens, club promoters, VIP cocktail waitresses and hicks who can barely string a sentence together without evoking images from their chicken farm back home. And I’ve done so with great enthusiasm. I legitimately root for the pharmaceutical sales reps to find love on The Bachelor, for the bikini baristas to win Big Brother and for the washed-up soap stars to ace the elusive quickstep . Last season on reality’s best non-talent competition I rooted for the geeky backstabber and the returning villain; I don’t expect everyone to be Colby Donaldson or Ethan Zohn, they don’t all have to be heroes; hell, they don’t have to be great villains either, I know we’ll never see the likes of Rob or Parvati again- I’m okay with that. But this season of Survivor has given me no one to cheer for. No, it’s not that I can’t cheer for them, it’s that I can’t stand their presence on my TV screen, the sound of their voices makes my skin crawl. It takes all the Probst love I can muster not to call this season a wash and hope the casting directors smarten up in time for installment 25, because these people aren’t even fun to hate, they’re just easy to hate.

Arrogant SOB Matt got the boot this week, which will have at least a small positive effect on the island’s douche-o-meter, but he didn’t take Colton with him, which is a weep-worthy fact. It was easy to make Matt the villain, hell Matt made himself the villain by pulling crap like forming an alliance based on muscle content without bothering to count how many people were actually on his tribe, then insisting on calling his hand-picked alpha males “the roosters amongst the chickens” (his knowledge of the animal kingdom was truly inspiring). But the muscled attorney’s comrades in rippedness have barely spoken 3 words since landing on the show and Bill was absolutely right when he used his 3 words to point out that Mr. Outsider Colton had made unfair and prejudiced assumptions about them before they had the chance to even say hello. Look, I get it if you’re more comfortable around women than men, I know I would have been horrified to find out I’d been cast on the stupid season that decided splitting people by gender was a good idea- but that IN NO WAY entitles you to be a bitch-tastic super-diva who’s not only verbally cruel to the men but actively unhelpful around camp (and don’t get me wrong, this is not a case of “he’s not macho enough to help build the shelter”, Colton’s fully capable of helping in lots of ways, he’s just an ass who refuses to). He’s even managed to alienate and annoy the women with his self-important whining and overtly sneaky ways. I’ve never disliked anyone on TV quite so much as I can’t STAND Colton- and if he weren’t so quick with his accusations of homophobia, I’m sure everyone else would admit they agree with me.

The rest of the men are okay, actually, so maybe I exaggerated a little bit about the universality of the hatred. I like Jonas alright (if he’d stop calling Colton horrible things like “leader”) and Troy (yes, I’m calling him “Troy”, none of this “zan” nonsense) stepped up as a pretty decent figure this week (even if he is a little nuts). Leif has yet to speak a single word but I have a suspicion both he and Mike have it in them to be decent guys. I’m particularly heartened to see, during the credits, that while Jay (I’ll admit I had to go look up his name) and Bill (annoying and kind of dim? yes; the horrible and deserving target of Colton’s hatred? no) voted with the majority to save their butts, Mike voted against his dumbass “alliance” (the smart move) but not for his best friend/ally Matt even though he knew Matt would go (the good-guy move)- maybe he’s the guy to stand up to Colton? Goodness knows somebody’s got to do it (though my money says no one will for quite some time, if at all). Tarzan, though clearly very principled, is a terrible judge of character and a flatout bad gameplayer so far, so he’s on my hate list too, but not overwhelmingly so.

Then there’s the girls, oh the girls, I struggle to find words to express how much I hate the girls. Let’s see- on occasion, Christina has not been an idiot (then she’ll 180 on that within minutes, so maybe that’s not that great an endorsement); Sabrina is cool- she is the female claim to decency on the island, though still not a season-saver ; Kim and Chelsea keep saying smart things (and are clearly strong players) but can’t seem to connect their brains with their actions, which is a little tough but very easy to improve; Monica, similarly, has her moments but can’t seem to get anyone to listen to her, so she fails; I liked Courtney but the dumb girl didn’t listen to Jeff’s safety instructions and ended up in the med tent within minutes of the premiere; Nina could have been great but she’s gone so that’s a moot point; Kat is useless and needs to go away immediately; Alicia is the worst female thing to happen to Survivor since Naonka- how is her tribe not horrified by the bossy, self-obsessed, judgemental, manipulative posturing she’s been throwing around?

As a group, they struggle with priorities and basic communication and strategy as a whole, but all that is forgivable (as are most of the aforementioned flaws- Alicia aside, I’ll never like her), what I can’t stand is their complete dependence on the men. No freaking wonder the fight for gender equality has been so damn tough, if this is our random sampling of 9 members of each gender, the superiority of the men on a simple life-functioning level is inarguable- which is crap, of course, so why are these particular women so incredibly unhelpful at proving that’s crap?! I don’t need them to be better than the men, I’m the last person to ever buy into that idea, but they could at least attempt to go one day without resorting to asking the men for help. And it’s not just that they ask (I was actually sort of okay when Chelsea asked to warm up for 5 minutes this week because their fire got drenched, I was less okay with the group’s bizarre aversion to giving the guys anything in return), it’s the way they ask- since day 1, the women have been wandering over to the men with their flirt voices on and their clothes conveniently  too hot to wear to ask for food and shelter, for help starting their fire (cause goodness knows none of them thought to learn how to start a fire before going on Survivor!)- it’s manipulative and exploitative and gross and so unbelievably unhelpful to the world that I can hardly forebear hurling things at the screen. Who cares if they’ve finally started winning some challenges, the game’s called Survivor and, at the moment, there’s no way these idiots could survive without the big strong men to help them (but don’t expect any compensation, guys- if the girls catch a chicken those girls are keeping that chicken!)

For reasons passing understanding, the producers have made this a battle of the sexes, and so far (the bad-person disaster that is Colton aside) there is one sex that is so very clearly better, which is just sad cause they’re kind of horrible too.