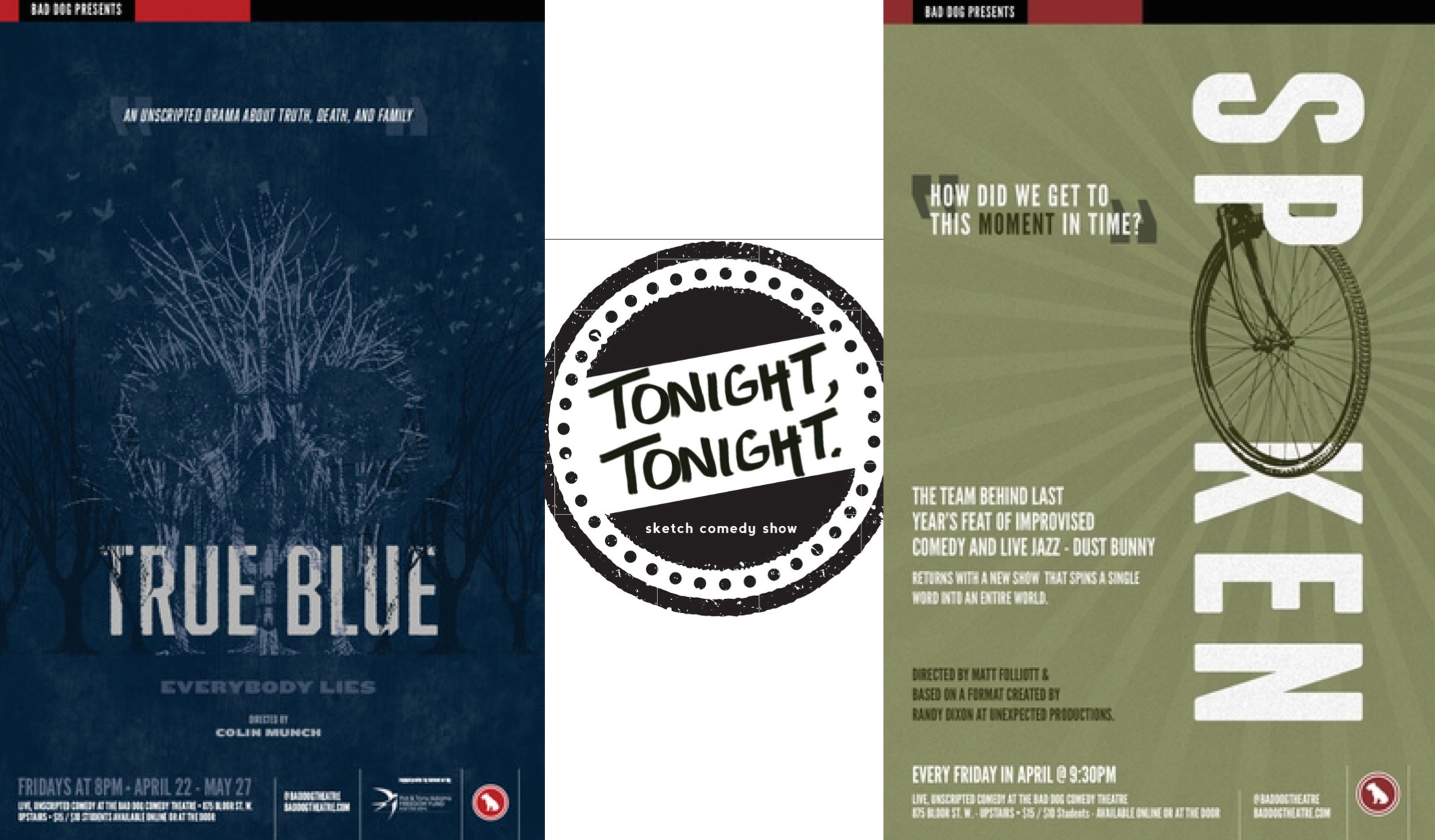 True Blue (Bad Dog Theatre Company- improv)
I lied (“everybody lies” says the poster for this show). The title of this post is Comedy Tonight but the first piece I’m talking about is not a comedy. It’s full of people you’re used to seeing in comedies- Bad Dog regulars and funny people borrowed from VideoCab, Brouhaha and the recently deceased Sunnyside– but True Blue isn’t trying to be funny. It’s a serious detective story (borrowing its procedural structure from TV, complete with a projected title sequence); if there happen to be amusing bits, that’s just life. With True Blue, director Colin Munch is bringing something different to Bad Dog’s improv lineup and the effect is thrilling.

Munch is known in the scripted theatre world for collaboratively developed plays with both comedic and dramatic elements that use improv as a key tool in the creation process but it’s rare that dramatic improv is presented as a finished product for audiences (though the practice is becoming more and more common on film). Perhaps the success of True Blue will prove that it works. Free from the pressure of getting a laugh on every line, the cast is able to really focus on story details and in-episode continuity. Aurora Browne‘s throwaway comi-tragic line as a confused old woman of “it’s Christmas” gets picked up by Danny Pagett and incorporated into the thickening plot, his drug dealer character using it as a code word for delivery day. Paloma Nuñez’s sketchy witness “Spruce” is revealed to be covering up a larger conspiracy when a cast member mixes up an established plot detail and the rest of the ensemble runs with it instead of correcting him (#YesAnd).

There’s a fascinating push-and-pull around the “everybody lies” reality of the crime genre as expressed through improv. The medium relies on the conceit that if a performer says something (“I’m just getting some air”, “she was my friend”, “I love you”), they are telling the truth and that reality can be built upon but in True Blue, deciding (then keeping track of) what’s true and what’s not is tricky business. The performers take notes throughout the show and producer Jocelyn Geddie creates a real-time evidence board to track the characters and clues as the story develops. The more experienced improvisers in the group keep the ambitious show on steady ground with lightning reflexes and self-assured choices, bailing out their co-stars whenever anyone backs themselves into a corner. Nuñez is particularly remarkable in this regard, creating three distinct, memorable characters that are consistent and grounded but also flexible enough to make sense in a world that’s being constantly reshaped by the other performers. Munch himself is the other MVP, his dual role as director and performer allowing him to guide the show from within, facilitating transitions that maintain the TV-episode structure and leading group scenes where the detectives review the evidence.

The only characters who recur week to week are Munch and Amy Matysio as lead detectives and partners in the grand Moonlighting tradition of bantering, bickering foils. Everyone else starts from scratch at every performance, one of them assigned the role of that week’s victim and the others filling out the rest of the world as investigators, experts, witnesses and culprits. The result is an hour of theatre that plays on a formula you’ve surely seen a hundred times (Law & Order, NYPD Blue, Castle, every other show on TV) and creates something you’ve never seen before.

Spoken (Bad Dog Theatre Company- improv)
A half hour after True Blue, Bad Dog offers up a more traditional piece of improv comedy. Directed by Matt Folliott, Spoken‘s premise is that it “spins a single word into an entire world”. It’s a cool concept, playing with the idea of context and interconnectivity, making a seemingly simple interaction more interesting by zooming out. In practice, though, the show ends up more as a random assemblage of independent scenes.

The audience is meant to create the narrative in their own mind, imagining for themselves how a hostage-taking girl guide and a couple meeting on the glass floor of the CN tower might be connected. There is no right answer since there isn’t consensus amongst the performers as to how things are connected, or even what’s going on (at last Friday’s performance, an awkward meeting at a bar could have been either a blind date or a mother meeting the son she gave up for adoption- the fun was watching the cast try to get on the same page without stepping on their scene partner’s idea).

Because the format facilitates very little continuity or overall story, the strength of any given performance is entirely dependent on the cast and how well things are clicking for them that night. Last Friday’s show was a bit of a mixed bag with some standout scenes from Nicole Passmore and Liz Johnston but nothing ultimately all that memorable. I tend to go in for more structured shows but, if you’re looking for sketch-length straight-up improv comedy, Spoken will deliver exactly that with a reliable cast of Bad Dog regulars.

Both True Blue (8pm) and Spoken (9:30) return to the Bad Dog Comedy Theatre tonight (Friday, April 29).
Get your tickets HERE.

Tonight Tonight (sketch)
For a dose of non-improvised comedy, I dropped by sketch troupe Tonight, Tonight’s recent show at the Social Capital Theatre. A few scenes worked incredibly well- Samantha Hogan as an anxious dog left home alone; Eitan Shalmon’s inner monologue as he’s forced to talk to an acquaintance on the subway- but the overall act needs polish. There’s a lot of laughter coming from on-stage and many of the performers are too loud, trying to top one another instead of working together and trusting the joke to land without overplaying it.

The Social Capital gig is ongoing (the third Thursday of every month at 9pm) so it’s likely that Tonight, Tonight’s act will refine into something incredibly effective by their final performance on December 15th but as of right now it’s not quite there.