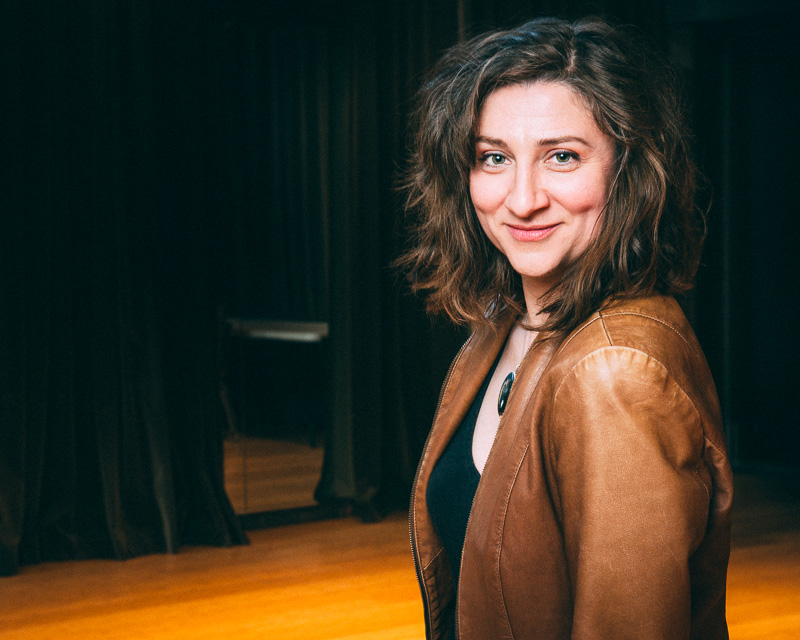 Outstanding Supporting Actress nominee Aurora Browne contrasted hilarious and clever characterizations of Maggie Trudeau and Jean Chrétien in Video Cabaret’s thrilling Trudeau & Levesque as part of the History of the Village of the Small Huts series.

We talked to Aurora to get the scoop on the unique Videocab style and how the history play is relevant today with a man named Trudeau once again holding the nation’s highest office.

Can you remember the first theatre production you ever saw?
The earliest memory I have of being in an audience was in Thunder Bay where I grew up. My parents took us all to see Moonlight Melodrama, a summer theatre company that was founded in the seventies. Every summer they put on classic boo/hiss melodramas where the audience was encouraged to shout and jeer and hurrah. I remember standing next to the stage being totally fascinated by the villain, and him speaking to me from the stage, asking me how old I was (six). Magic. It was such a special event whenever we went, and that company continued to be part of my life right up until the last summer I lived in Thunder Bay before coming to Toronto for university. I finally got to be an actor with them for that summer’s season and it was a blast. Hanging out and working with those people was the best send off to the future.

What’s your favourite role you’ve ever played?
Favorite role…it’s got to be playing Betty in David Benjamin Tomlinson’s GASH! at Summerworks 2014. The whole production was delicious and crazy, a real immersion in the ‘hag horror’ genre that went way deeper than a simple sendup. I’ve certainly been fortunate to play and create interesting characters in my career but I’d never been as taken with anyone as with Betty. I felt very safe to take some stylistic risks with Clinton Walker, and this character emerged that I was almost infatuated with. I couldn’t think about anything else that summer. She was a crazy dark pit of pain and mischief and I loved playing her. I’d love to see that show get a full remount.

Do you have a dream part you’d like to play one day?
Oh, that’s a tough one, but I have always wanted to play Ernestine in The Anger in Ernest and Ernestine!

How did you get involved with Video Cabaret?
I slipped into the Videocab world as all their actors do, by doing their script workshops for many years –five!- whenever their main players couldn’t be there. Those are your audition. I was very lucky that my good friend Anand Rajaram, who I knew through Second City, put my name forward to them. It’s a very intimidating process in a way because you just jump into the scenes with people who are already in their company and know the style, and also the director puts everyone through their paces by getting you to do an array of accents from your chair. Like many people, I totally bombed the Welsh accent but I guess I did well enough on the other ones that eventually they hired me for real. The day I got that call was the best.

Take us inside the mechanics of the Videocab style for a moment. How do you perfect the quick-cut transitions? What’s the toughest element to get right?
Videocab rehearsals are unique in my experience in that you are on your feet and marking blocking in your script from day one. There’s no table reading or thinking through a scene beforehand. This is because the choreography of the quick changes and entrances and exits are so intricate and essential to the show that you have to be working on them all the time. It’s like a dance. There’s a lot of strategizing about where you should be exiting if you’re going to be entering again 30 seconds from now. We have a general idea about what is lots of time (3 minutes) and what is an actual quick change (10 seconds). Once Astrid Jansen and Alice Norton have made the costumes and wigs then the rehearsal becomes about nailing down exactly how you get in and out of the costumes. And throughout the run every change gets refined by half seconds once you really know the moves you have to go through, who is holding your costume up for you, where exactly you have to stand to then grab someone else’s prop as they come off for their quickchange…it’s like clockwork. You get to know precisely how much time you have for a break. Four minutes off begins to feel like a vacation.

How much of the performances are dictated by the company’s trademark stylization vs. individual actors’ interpretation?
The framework of Videocab is so tight and simple; be in the narrow beam of light, face forward, wear these insane costumes, oh and here are five lines to get this entire political issue across. So that makes lots of choices for you. But within that framework we have incredible freedom. Michael Hollingsworth is so supportive of anything we try. If it’s not working, you get a simple “Cut that”. But if he likes it, and he likes a wide range of things, you have the injunction to run with it! It’s enormously satisfying.

How do the makeup and over-the-top costumes play a part in developing the performance?
The makeup is a basic factor of the shows that you can’t really know until you’ve had it on your face. The day of rehearsals when everyone puts the makeup on is always my favorite, because it’s the final transformation. And everyone’s face looks so beautiful, and at the same time so alien and grotesque. We spend a lot of time staring at ourselves in mirrors, trying on different expressions. It’s so freeing, you can allow yourself to go to some pretty marvelous places. And there are some characters you don’t quite understand until you get the costume and the wig on. The wigs by Alice Norton are just as essential as Astrid Jansen’s costumes It’s so hard to pick what element is the most defining. Without any of them it just would not be the same.

You played Maggie Trudeau and Jean Chretien. Can we gleam any insight from the fact that those two in particular share a performer?
Ha! Well, it’s mostly the math. The scene changes are so tight that once your track has been established as being with one actor, in this case being in scenes with Trudeau all the time, you mostly stay with that actor. But I think you can certainly draw more contrasts with Trudeau in this show by seeing how he treated the people he was close to, and that’s heightened by having the same actor with him for much of the show. He was almost contemptuous of Jean Chretien at times, and certainly his relationship with Maggie had a, shall we say, wide arc.

Most of the historical figures in the History of the Village of the Small Huts shows are distilled to caricature. What are some of the smaller details you were able to sneak in to flesh out the characters?
I tried very hard with Maggie to put more into her than strictly what was on the page. She had some very large emotional leaps to make in not a lot of scenes, and I tried very much to put in little physical things to show how she was feeling, how she looked at Pierre, how she was feeling about the restrictions on her freedom. Also I ended up sneaking in a line at the end of one scene based on a story Mac had been told about her telling Pierre to go fuck himself at a party…but only a few times!

How do you research your impressions? Did you have specific traits from each character that served as a foundation?
With Maggie and Jean there is a lot of material out there on YouTube to work with. For Maggie my keys into her were her voice – almost mid century trans-atlantic sometimes, very deeply Canadian at other times -, and her way of barely blinking. There are some interviews where her eyes are so wide and unflinching, it’s almost painful to recreate. Jean Chretien was unexpectedly fun to play. His facial expression is certainly distinctive, but more than that is his height and how he so often is shrugging and almost rolling his eyes. He’s a very laid back dude. I found him almost instantly and he was delightful to be inside of.

Trudeau & Levesque is one of the most contemporary pieces in the Videocab Canadian history series and, with the recent election, it’s roaring back to relevancy. Is there any sense of added pressure with the Maggie character especially given that a Trudeau is back in office?
Oh it was definitely a conscious decision by Videocab to bring back this particular play given that Justin was becoming so interesting in national politics. And it was stunning how so much of the rhetoric of the time is so relevant again.

Did it ever weigh on your mind that, when dealing with such recent history, someone portrayed in the play could potentially come to see it? What do you think would be their reaction?
I don’t know what I would have done if Maggie had come to see this play. I wished for it and feared it at the same time. Luckily she didn’t, or if she did I didn’t know about it, because I think I would have been frozen with self-consciousness. I believe the invitation was extended to Justin but really, who wants to see their family history up on stage when they’ve lived it already?

I slept through most of Canadian history class but, thanks to Video Cabaret, I know my Trudeau history pretty well now. Do you do much work with schools to teach kids that our history is entertaining after all?
You know, I was shocked to learn that many high schools don’t teach about the October Crisis and that part of our history. When we did The War of 1812 we had a lot of school groups come in because they had it on their curriculum as part of the anniversary of the war, but we had very few school groups in for the Trudeau plays. Such a shame! It’s such a visceral, enjoyable way to learn our history.

Tell us about working with fellow nominee Mac Fyfe as Trudeau.
Mac is a crazy, meticulous, beast of an artist. He is so dedicated to each of his performances and he’s a demon for research. Sometimes he had a very difficult time even dropping the Trudeau voice offstage. But he’s also a very playful performer and I trusted him completely. It was a joy to do the show and I love working with Mac.

Did you have a favourite moment in the production?
Definitely dancing in the disco scenes with Michaela Washburn playing Andy Warhol! I never got tired of hearing Donna Summer and sniffing “coke” off our prop mirror.

Who are some artists who’ve had a major influence on you throughout your career? Do you have any favourite people to work with?
Both of these are so unanswerable as there are so many people!

What are you doing now/ what’s your next project?
At the moment I’m working on the final editing stages of an all female sketch show that’s going to be airing on CBC this summer. Four of us (Carolyn Taylor, Jennifer Whalen, Meredith Macneill and myself) created, wrote and star in it. It’s the best!