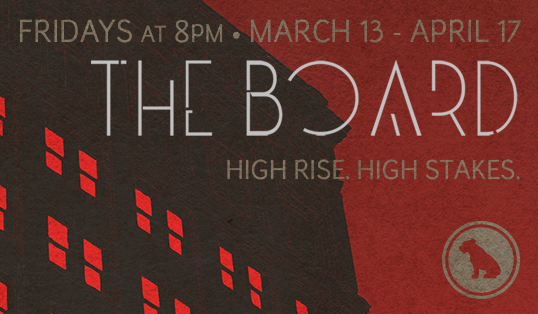 A Night in the Dog House: The Board & Pushpins

Improv is risky business for a theatre-goer. Sometimes the freshness, urgency and unfiltered, uninhibited whimsy that can be so thrilling results in not a lot more than broad havoc and jokes that could use a re-write. But when everything does come together just right, there’s nothing like it. In Toronto, the closest thing to a safe improv bet is at the Bad Dog Comedy Theatre on Bloor West where the 2013 Honorary My Theatre Award– winning Bad Dog Theatre Company puts on up to four shows a night at by far the best prices in town (tickets are only $12 and even less if you stay for a second show).

Their current Friday lineup consists of two shows- The Board and Pushpins. The former is a darkly clever look at the sort of people who would run for what director Colin Munch calls “a committee of absolutely zero importance”. Focused and sharp, The Board‘s small cast (especially standouts Liz Johnston and Christy Bruce) do some of the best character work I’ve seen at Bad Dog and the effect is one of the funniest hours I’ve spent in their great theatre.

I was less overwhelmingly impressed with Pushpins despite it featuring the company’s stalwart Repertory Players. A much broader concept makes this signature format a bit more hit or miss, which didn’t swing in my favour the night I attended the show. The world-building makes for some fun opportunities but the too-big cast feels less cohesive and tuned in to each other with the loudest voices pushing their way to the front of the line and leaving some of the more subtle performers behind.

The Board is easily worth the $12 admission price, more even. It’s helpful, then, that it’s the first show of the night because the reduced double-feature prices make it pretty easy to want to stay for a few more hours no matter what’s coming next.