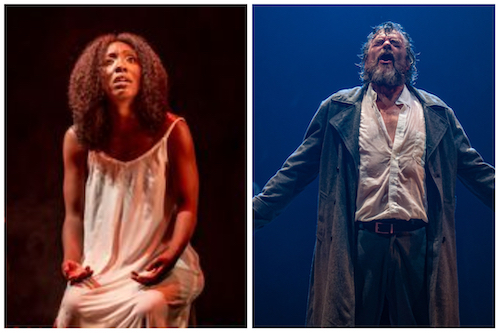 I love the concept behind Soulpepper’s bold Lear Family Double Bill that pairs a very solid production of Shakespeare’s King Lear with a new play by Erin Shields that imagines what might have happened seven years earlier to inform the behaviour of the characters in King Lear. Shields’ play Queen Goneril focuses not just on Lear’s eldest but on all three young women who move a lot of plot but don’t speak a ton of words in Shakespeare’s text. The fundamentally empathetic thesis that perceived villainy can be contextualized with further character examination is a moving idea that I believe strikes closer to the human experience than our usual assessment of theatrical heroes and villains. But the concept only works if the two pieces really feel of a world and the character journeys believably track from Shields’ play to Shakespeare’s. Though both plays have their merit (one perhaps more so than the other), they don’t quite fit together for the proof of concept I was hoping for.

Queen Goneril begins with a video faux interview with two actors- Tom McCamus and Virgilia Griffith, importantly not playing themselves but playing actors playing the same roles that they are playing. Here Shields displays a thrilling knack for subtext and evocative mimicry of achingly common miscommunication and frustration as McCamus’ character very politely steps all over the experience of his young Black female colleague. It’s the perfect introduction that primes the audience for the coming epic that will gift the ultra-deserving Griffith the volume and intensity of material that older white male actors enjoy on the regular. But sadly that is the principal thrill of Queen Goneril, getting to see one of Canadian theatre’s best performers unleash all her pent-up main character energy. If only the plentiful material that Griffith and her onstage sisters finally get to play was anywhere near as good as King Lear. The good stuff, ironically and bittersweetly, still goes to McCamus.

Full of interesting ideas that work as thought experiments far more than as practical plot points, Queen Goneril sadly feels like fan fiction, a big collection of ‘what if’s that kind of work while you’re watching Queen Goneril but really don’t make sense in the larger context not just of King Lear on paper (which is surprisingly fluid and can be molded to fit bold interpretations) but of this particular production of King Lear that seems almost to have been directed with no regard to Queen Goneril at all.

But it’s hard to criticize director Kim Collier and the cast of King Lear (who are also the cast of Queen Goneril) for not leaning too hard on the new backstory because, taken in isolation, their Lear is splendid. Dark and sad, layered with bitter humour and petty aggression, the Soulpepper Lear does thrilling justice to the classic text. It’s admittedly not Goneril’s story, she doesn’t have nearly as much text as the King, but if you couldn’t get the complexity of her feelings about her father and her rich inner life from Griffith’s thoughtful performance without the help of a backstory, you just aren’t paying attention.

Jonathan Young, whose Edmund is a pretty generic nice guy in Queen Goneril, is a captivating charisma bomb in King Lear, his character having somehow developed a sense of humour in the intervening years. Oliver Dennis‘ Gloucester receives a really dark re-contextualization in Queen Goneril (an interpretation I think is actually really intriguing and rooted in valid reading of oft-overlooked lines) but the actor doesn’t play an ounce of that new context in King Lear, and neither do the actors reacting to him. Queen Goneril gives Breton Lalama’s Oswald perhaps the most complicated backstory of the lot, reimagining their connection with Goneril as star-crossed and their service to her based in gentle devotion. Lalama’s Oswald in King Lear is sexy and sassy and very fun but one small piece of intimacy direction is the only acknowledgement that there was ever anything to Oswald’s place in this court beyond amusing ennui and bare minimum fulfilment of duty.

The attempts at humanization through contextualization work for a little while without getting in the way in King Lear if you saw Queen Goneril first. For about one and a half acts, I could see how some audience members would be helped along by a feeling of kinship with Goneril and Regan and being able to see their point of view usefully deepens the experience of King Lear. I would argue that a good King Lear should give you all that without the need for a prequel to teach you how to empathize beyond the protagonist (and this is a very good King Lear) but since that extra bit of context doesn’t interfere, it’s fine for awhile. But there comes a point when this double bill needs to reckon with the fact that Goneril and Regan are the villains. Around the time when their cutting of their father’s train loses its practical fairness and becomes punishment, the sisters take a turn and their actions are their actions. No backstory can excuse eye-gouging and sister-poisoning and it’s hard not to feel as though the explicit trauma we have to watch them experience in the prequel is an attempt to balance out their behaviour in the later acts of King Lear – years of abuses from an unkind father aren’t enough but maybe you can still see them as people if they’ve been brutally attacked. I could feel the texts fighting each other and that’s not the struggle I’m here for.

The constant easter eggs and Shakespeare line drops that pepper Queen Goneril don’t help with the fan service quality of the text, especially considering how much the verse references stand out in the contemporary prose style of the prequel (the language is the most explicit evidence of the confusing lack of cohesion but everything from the costumes to the relationships participates in the dissonance). One of the greatest privileges of a well-funded company capable of real repertory is the ability to pull off a feat like this- two huge plays sharing one world and one cast. It’s an ambitious undertaking and a fabulous idea so I’m heartbroken to find myself wishing they had just stuck to King Lear.