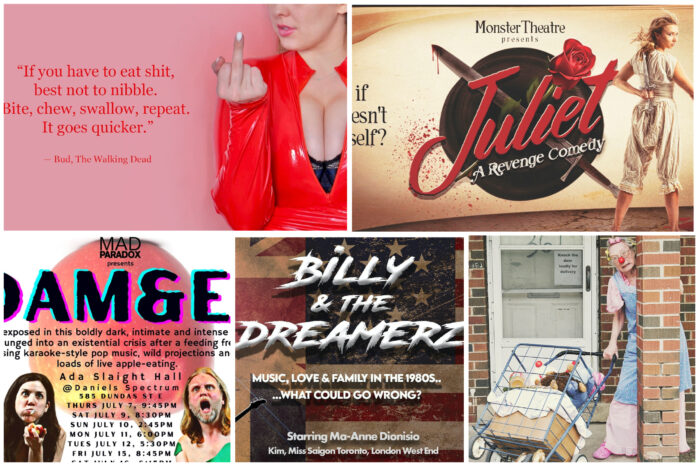 I was grateful for Fringe’s masking policy when I saw this atrociously named solo show from the ever-inspiring Vikki Velenosi. The true story opens with a voicemail so shocking that I sat mouth fully agape for a good two minutes before recovering my wits. I also cried, and masks make it a little easier to subtly sob over a confusing mixture of empathy, terror, trauma, and whatever that feeling was that made all the ladies cry during the no man’s land scene in Wonder Woman. Vikki’s stories are harrowing yet she heroically makes them hilarious in a conversational, semi-musical monologue about unworthy men and how she’s survived them.

Juliet: A Revenge Comedy (A-)

An excellently executed re-evaluation of Shakespeare’s suicidal heroines (and, for some reason, The Tempest’s Miranda), this delightful romp begins with a series of progressively shorter stagings of Romeo & Juliet, complete with every relevant plot point and direct line pulls. Lili Beaudoin (who plays a sparkling young Juliet) and Carly Pokoradi (who plays nearly everyone else, including a particularly memorable Lady Macbeth) are very capable classical actors whose proficiency with the actual Shakespeare content of the play lends great weight and credibility to their critical commentary. A really fun parody with depth and excellent execution, Juliet and her vengeful comrades are some of the standout stars of this Fringe.

Inside Ethel: Outside (A-)

Christine Moynihan’s delicate clown Ethel makes an evolved reappearance after her 2019 Fringe outing but this time our agoraphobic heroine is venturing beyond her bubble in order to find her estranged son. Knowledge of Ethel’s previous adventures will help flesh out a few of the references in this sequel but it’s not completely necessary as Moynihan’s emotional communication is crystal clear even through the gobbledygook that is Ethel’s only language. Katherine Duncanson assists as Ethel’s unseen “spirit guide” who corrects her path and restrains her darkest instincts, leading to an ultimately hopeful tone despite Ethel’s fears, the very present darkness of the pandemic world she’s bravely stepping out into, and a melancholy final note. This stronger, more optimistic Ethel is a quiet, tender, quirky treasure.

This avant-garde Genesis retelling is a tricky one to review. I think that this production probably accomplishes all of its creators’ theatrical goals with most audience members, and I want to give them credit for that. Marissa Blair and Jeroen Lindeman are fine performers who attack the work with vigour and authenticity; they appear to be executing on their intention at a decently high level. The problem is that there is no such thing as objective success with a show like this. After witnessing some shock-value theatrics then enduring a guilt-ridden stare-down, all there is is the pit it leaves in your stomach, or doesn’t. And they left me with nothing. I don’t know, I was mostly annoyed at having been lectured. Sure there’s graphic onstage sex, full nudity, and fake period blood but none of it is half as horrifying as that voicemail from Rob #1.

I so badly wanted to like this original musical about misfit wannabe musicians living in the UK in the 1980s but neither the material nor the execution is strong enough. The songs are derivative, the direction awkward, the performances incredibly stiff (with the exception of Ma-Anne Dionisio, a consummate pro who feels very out of place in the very small role of the main character’s mother). I love a behind-the-music story but this one needs a whole lot more thought.