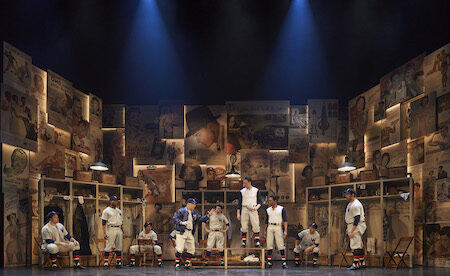 Every second of this vibrant new staging of Adler & Ross’ 1955 musical comedy about a team in need of a win is packed with delight. From stage magic that rivals anything in The Cursed Child to the thrill of rooting for a new star, The Shaw Festival’s Damn Yankees is the most fun I’ve had at the theatre in so long I’m actually drawing a blank.

Let’s start with the star because it’s the story of the year with a real baseball ring to it. When this season was announced, the Shaw had cast proven star James Daly to play the hotshot young player at the centre of the show’s deal with the devil. He’s dashing, he’s energetic, I’m sure he would have been great. But then he got injured and the understudy had to step in. This season is rife with understudies for obvious pandemic reasons, capable folks stepping in for a show or two all across the theatrical landscape (I’ve only seen one or two shows all season without a single understudy). But this was different. It wasn’t Covid, it was an injury, so while Daly can still be seen winningly singing and step touching in the fantastic concert staging of A Year with Frog & Toad, he can’t currently do the full choreography necessary for the lead in Damn Yankees. But in an almost Wally Pipp-like twist, the understudy turned out to be exactly the star the production needed.

A quick lesson in prolific theatre-going: watch the ensemble. There is nothing, and I mean nothing, at least for me, more satisfying than spotting a star before the light hits them. Drew Plummer has been shuffling along in the Shaw background for a few seasons now, eliciting pretty consistent “who’s that guy?” reactions from the people paying attention. He was always just so THERE, singing full heart whether he had solo lines or not, committing hard to every pirouette and silent reaction to the downstage action. So now, with basically no supporting roles in between, he’s catapulted to leading man and (please forgive me for this) it’s a home run on the first pitch. Not only is he superficially perfectly suited to the role with a strapping slugger’s build and deal-with-the-devil perfect baritone but that same enthusiasm and sincerity that so clearly came through from the ensemble gives his character the perfect everyman charm. The story of Damn Yankees rests on a nice, normal guy getting plucked off his couch and thrust into the big leagues; an unexpected chorus-to-star behind the scenes subplot only makes it better.

Which is not to say that the production won’t stand up once Plummer is back in his original role as one of the other players on the Senators. Brian Hill’s direction is bright and fun with pop-y designs from Cory Sincennes and energetic choreography from Allison Plamondon. The ensemble is full of great performances and the musical is structured in a way that actually gives most of them something to grab hold of rather than blending into a mass of interchangeable characters (if I had to name my next “keep an eye on that one” performer, I’d say watch out for Kevin McLachlan). Patty Jamieson is funny and oh-so-sweet as Joe’s left-behind wife and perennial favourite Mike Nadajewski takes an unforgettable turn as the devil, a tricksy superstar who threatens at every turn to run away with the whole show (magic & illusions designer Skylar Fox’s name should be shouted from the rooftops).

Only Kimberley Rampersad leaves anything at all to be desired as Lola, the devil’s unwilling servant tasked with seducing and destroying poor Joe. Rampersad is fun playing the temptress and sympathetic as her feelings evolve in a direction far more complex than it’d be normal to expect from a 1955 musical, but her vocals aren’t the knock-out I was hoping for and is the standard from the Shaw musical company. A small nitpick because nothing’s perfect but boy this production comes close.

Damn Yankees is joyful without being empty, a spectacle built on artistry more than budget, expertly executed and fantastically cast at nearly every level. It’s a better, richer musical on the page than most of its contemporaries and this production doesn’t feel dated for a minute. Go, it’ll do your heart a lot of good.