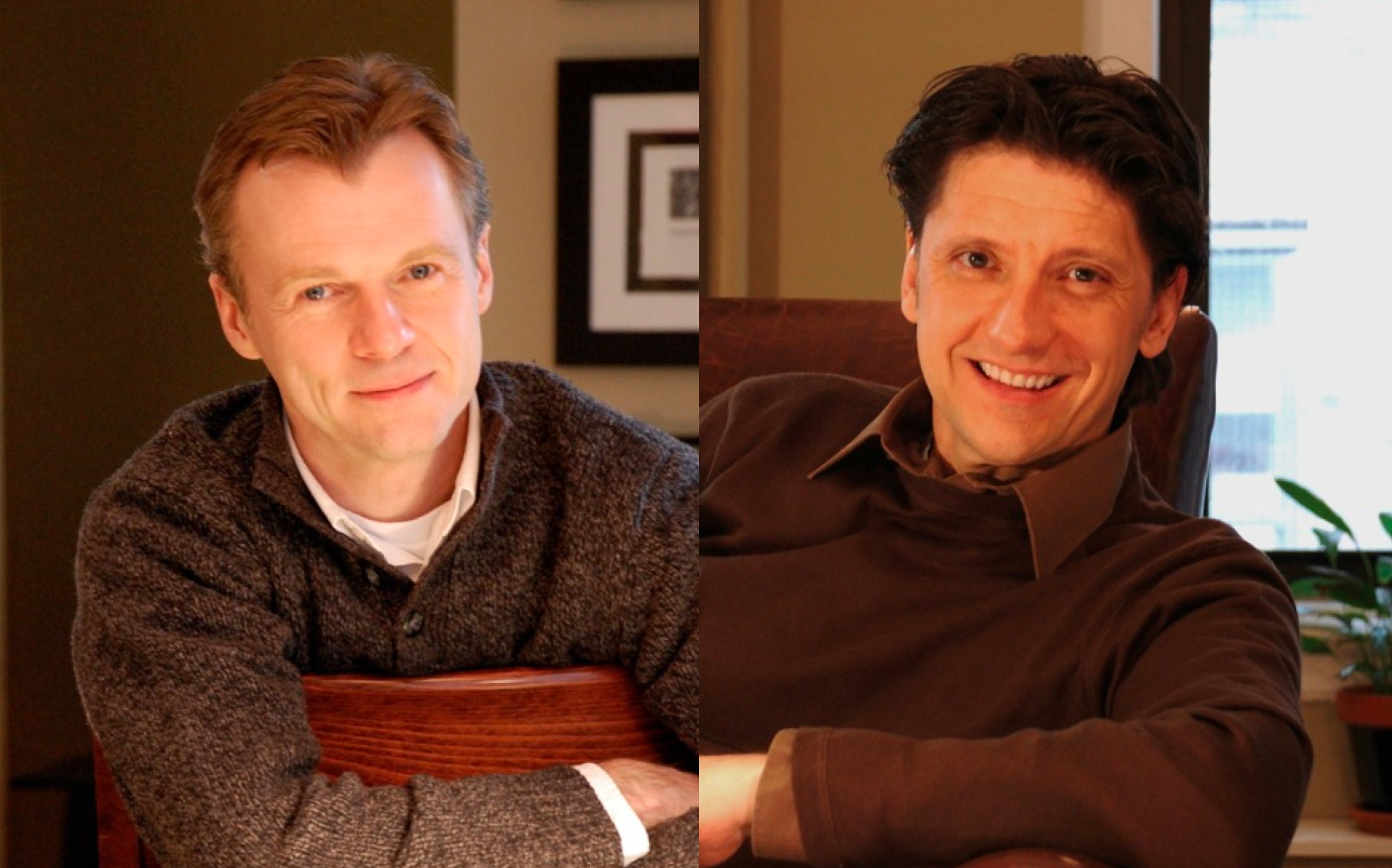 Neil Bartram and Brian Hill are the award-winning composers of multiple musical theatre hits including Broadway’s The Story of My Life (nominated for 4 Drama Desk Awards). Acclaimed directors and actors who’ve worked on international hits like The Lion King , The Sound of Music, Sunset Boulevard and The Little Mermaid (Brian Hill) and received prestigious grants such as the Jonathan Larson Foundation Award the Dramatists’ Guild Fellowship (Neil Bartram), Bartram & Hill were the artists in residence at Toronto’s Bishop Strachan School in the fall of 2011, where they staged a reading of their latest work Not Wanted on the Voyage (based on the novel by Timothy Findley) . The reading earned them a nomination for our My Theatre Award for Best New Work, which earned us the chance to interview the crazy busy team about Story, Voyage and their writing process.

How did you two meet? How did the prospect of teaming up come about?
BRIAN: We met as actors in the first Canadian company of Forever Plaid. I played Frankie and Neil played Sparky.

NEIL: Yes, we met doing Plaid at the New Yorker Theatre in Toronto (now the Panasonic and way fancier) but we both had aspirations to do other things besides acting. Brian was interested in branching out into directing and I had studied composition at college and had started doing some music directing. I, probably more than Brian, felt like acting had a short shelf-life for me.

What is it about the partnership that works so well?
BRIAN: We’ve known each other for so long that we have an incredible shorthand. We always know what the other is thinking and we generally have the same view on the direction that something should go in.

NEIL: The biggest thing, as Brian mentioned, is that we share the same aesthetic. And we both really like the other’s work. That’s important.

What writers have always inspired you?
BRIAN: All the good craftspeople. Ahrens and Flaherty, Sondheim, Lerner and Loewe, anybody who just generally knows what they’re doing.

NEIL: I didn’t grow up listening to musical theatre so I think I was inspired more by the singer/songwriters whose albums I wore out like Billy Joel, James Taylor, Elton John, and Randy Newman. And when I moved to New York I had some amazing mentors: Lynn Ahrens and Stephen Flaherty, Adam Guettel, Craig Carnelia, Maury Yeston, Richard Maltby Jr. – as Brian said, these are all people who really know the craft of writing musicals. And all have inspired me.

Have you always loved musical theatre? What are some of your favourite shows?
BRIAN: I was raised on it. I remember listening to cast recordings at my Grandmother’s house when I was really young.

NEIL: Like I said earlier, I didn’t grow up listening to theatre music but I have vivid memories of my parents taking me to a touring production of A Chorus Line at what was then the O’Keefe Centre. I have a ton of favorite shows now, each for different reasons, but I think my all-time favorite is Carousel because of that glorious score.

How old were you when you first started writing?
BRIAN: The first thing I ever wrote was the “book” for The Sound of Music when I was about seven years old. I had never seen the movie but I had the recording and wanted to write the scenes that I imagined would go between the songs. But the first real show we ever wrote was a commission for the Charlottetown Festival Young Company in 1993. I won’t, however, reveal my age at the time.

NEIL: I started piano lessons at age 11 and started writing pretty much straight away. I studied composition at college, but the first theatre writing gig was the commission from Charlottetown that Brian mentioned. Brian came up with an idea for a show and I wrote a spec song to submit with the pitch and we landed the job. It was years before I realized how unusual it was to get a commission right out of the gate.

I saw The Story of My Life when it first premiered at Canstage starring Brent Carver. Years later I bought the Broadway Cast Recording. Why so many changes between incarnations?
BRIAN: Pieces keep evolving and you learn from every production and reading.

NEIL: Yeah, especially when it’s an original show like Story was. It takes a while to figure out what it is you want to say and how to say it. I’d like to think that through all its incarnations, the heart of the piece remained intact.

Is that show based on your lives at all? “Mrs. Remington”, in particular, feels very true.
BRIAN: The show is not remotely autobiographical. But the idea of having people in our lives who have profoundly affected us is something we’ve both experienced.

NEIL: Well, it’s not autobiographical in the sense that the characters and the storyline parallel our lives, but there are specific situations that are inspired by events and people in our lives. I wrote “Mrs. Remington” with a particular teacher of mine in mind remembering the way she made me feel, but the story of the song (“Mrs. Remington” being hairy and Alvin dressing up as his mother’s ghost) is made up to serve the larger story.

What was it about Timothy Findley’s book that got you thinking about a musical adaptation of Not Wanted on the Voyage?
BRIAN: The book itself is FULL of music and has the search for one’s voice as a central theme. That seemed like something that could be easily translated into a musical theatre piece.

NEIL: Also, the story exists in a larger-than-life, mythical, theatrical world. Those are the types of stories that appeal to us because we’re always looking for something that is “stage-worthy”. Often a property is adapted for the stage from film or a book and is not improved by the transition. We felt that music made a crucial addition to this piece. Fortunately, Timothy Findley was in agreement.

Take me through the process of adaptation. Are you pretty faithful to the novel?
BRIAN: The novel is so dense that we had to drastically pare down to the essential plot points that served the story we wanted to tell. And there are so many provocative and disturbing things in the novel that just wouldn’t fly in a musical. We’ve been faithful to the tone of the piece but we’ve altered quite a bit.

NEIL: I think that about covers it.

What’s your writing process like? Do you plot and plan or just start at page 1 and work through?
BRIAN: It varies, but we rarely just start at the top. We tend to write the things that are really clear to us first.

NEIL: For me it’s finding the key song moments and starting with those. When those anchor moments are dealt with, it’s about filling in around them and building to them. I don’t think I’ve ever written the opening number first.

How does one write dialogue and lyrics for a cat? (or a Hippo, or Lucifer for that matter?)
BRIAN: First you have to forget that it’s a cat and treat it completely as another human character.

NEIL: Brian is really good at giving each of the characters a specific voice in their dialogue (are they precise when they speak, are they poorly-educated, are they always cranky?) and my job is to carry that over into the lyrics. I have the advantage of music which helps to subliminally fill in some of the blanks. For instance, Lucifer’s music would be very different from Mottyl the cat, and that tells part of the story for the audience.

Did you go through a lot of drafts? How did the show change through the development process?
BRIAN: Yes, it’s been revised a number of times. Each reading teaches us something new. We’ve spent most of the time narrowing it down to Mrs. Noyes’ story.

NEIL: There are many, many song casualties. All jettisoned or rewritten in the effort of making the story clearer.

NEIL: We’re always open to that one brainstorm that will make everything fall into place.

Do you have a favourite moment or song in the production?
BRIAN: That’s impossible to answer.

NEIL:  I have a lot of little favorite moments. Most of them stem from the feeling that an intention is realized in a satisfying way. Often I’m proud of moments where I feel like the lyric really says something perfectly. With lyrics you have to be so economical – and it has to rhyme. So when a lyric, or even part of lyric, turns out well it’s something of a minor miracle. I guess the goal is for the show to be completely made up of those moments.

Not Wanted on the Voyage calls for some pretty intense effects (the boat and the storm, for one thing, a person playing a cat for another). Is it meant to be big-budget or creatively directed around those obstacles?
BRIAN: We never want the show to be so literal as to have a big boat on stage. It always works better when those things are left to the audience’s imagination.

NEIL: In a reading like we did at Bishop Strachan, the audience gets to create the world in their minds. Nothing in a full production could ever live up to that, so the trick is to do as little as possible. Audiences are smart. If Mrs. Noyes points at another actress on stage and says, “This is my cat” an audience buys it. They don’t need to see a tail and whiskers.

How did you get involved with The Bishop Strachan School?
BRIAN: We got a call from Brendon Allen who heads up their performance program. He was aware of the show and wondered if we would come up and work with the students on it.

What was your experience like working with the students on the workshop reading?
BRIAN: It was great. We love working with students. They’re so open and brave.

NEIL: Yes, they come at the material from a very pure and uncluttered place. There is some extremely difficult music in this show and they handled it beautifully.

Did you learn anything about your piece during that process? Did the students influence any changes?
BRIAN: We didn’t make changes during this reading but we did learn that the show can work very well with a relatively small cast.

NEIL: We didn’t have the time to make major changes while we were at Bishop Strachan, but we did some edits for the sake of time that informed what is crucial in the storytelling.

Any plans for a full production of Not Wanted on the Voyage in the near future?
BRIAN: We don’t have any concrete plans right now but we’re looking for the next home for the piece.

NEIL: Nibbles but nothing to announce. Since being in Toronto, we did a workshop/reading of Voyage at Goodspeed Musicals in Connecticut where we did the pre-Broadway run of The Story of My Life. But I’ll say, we’d love the piece to be done in Canada.

NEIL: I spend between 10 and 12 hours at the piano everyday. We have insane deadlines to meet and I’m a really slow writer.

Do you have anything you’d like to add?
BRIAN: Thanks for your website. I love it when people love musical theatre.

NEIL: Ditto. And thanks for recognizing Not Wanted on the Voyage and the students who worked so hard on it!