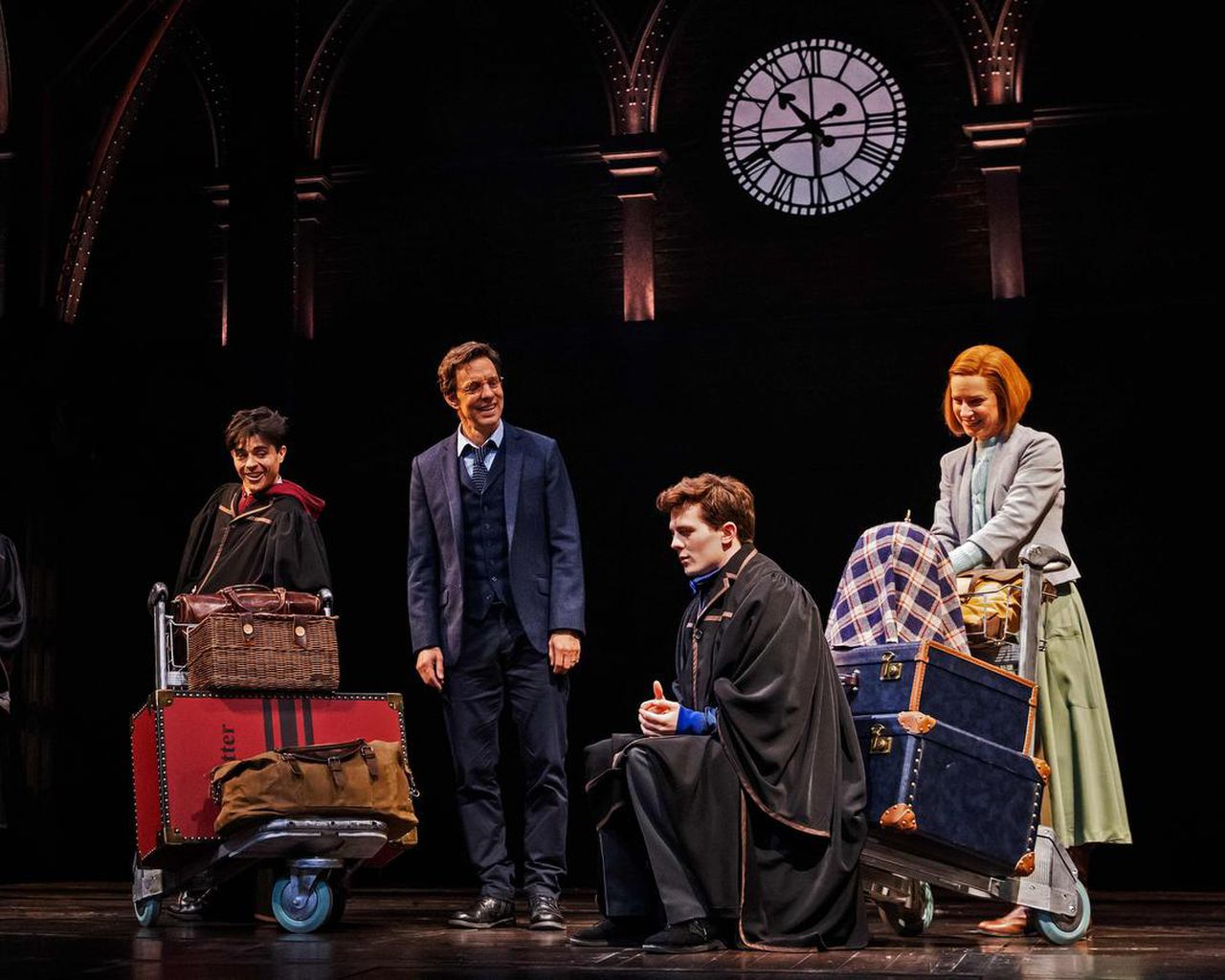 I couldn’t have expected less from Harry Potter and the Cursed Child. When Mirvish announced they’d be bringing the magical behemoth to Toronto with a new Canadian cast production, I was all sorts of annoyed. It’s hard to find real success with a sit-down production in Toronto- we just don’t have the tourist numbers to support them and our relatively small theatre-going population isn’t known for repeat visits to big commercial shows. So why, if we only have so much space for a potential long-running commercial production in one of our few Broadway-style theatres, why does it have to be a franchisey non-musical designed entirely to cash in on nostalgia and longstanding affection? Two orchestra tickets to Cursed Child in London will run you £580, which translates to 923.84 Canadian dollars and figures like that make me want to throw things. To say nothing of how much I despised the original script when it was first published.

Do not get me wrong, I’m not anti-Potter. I adore Harry Potter– always have, always will- but I subscribe to a pretty firm “JK Rowling died years ago” belief system. I figure she handed in the final draft of Deathly Hallows and dropped dead of a job well done. That original book series is generation-defining and it means a lot to a lot of people. One trip to the thank-you-graffiti-covered walls of the Elephant House cafe in Edinburgh is enough to convince you that we would not have been better off without Potter, if you weren’t convinced before. But, since the publication of the seventh book, Rowling hasn’t put an ounce of good into the world. She’s done harm both immeasurable and trivial with her political beliefs, careless voice, lazy writing, and just plain weird revelations. So I’ve killed her off in my brain and I try not to throw any new money at her estate. She never joined Twitter. She never made anyone feel less than. She never championed Johnny Depp. She never grossly underused Eddie Redmayne. She never told the world that, before stealing toilet technology from Muggles, Wizards used to just poop on the floor (actual thing she said, except she didn’t because she died long ago of natural causes). She’s gone, but she left behind that good thing she did once upon a time and we’re still allowed to love that. She can’t take it away.

Ok, so, we’ve got a universe I care about deeply, a script I abhorred on the page, a creator who does not deserve your hard-earned dollars, a very exciting cast of Canadian theatre greats, and my general grumpiness about the choice to mount the production in Toronto at all (imagine funding this thing while claiming you can’t afford to keep Come From Away afloat without government assistance! I could scream). Hoo boy.

The first practical reality we should get out of the way is that Mirvish gave me press tickets to review this production. That’s pretty standard but it’s specifically notable here because I’m genuinely conflicted about recommending that you spend your own money to see it. There are some amazing artists involved and I really want them to keep these sweet gigs for at least longer than the Dear Evan Hansen folks got to keep theirs. The truth also is that this was a big gamble for Mirvish (not one I think they should have taken curation-wise but let’s move past that) and, whether I like it or not, it’s really important that Toronto’s one big commercial theatre producer stay in business. I can’t wish a flop on them in good faith. The more money they lose, the more cynical commercial decisions they make, and that’s definitely not good for our landscape. It’s still not cheap but, because the production has thankfully been condensed into a single play for a single ticket price (more on this in a bit), it’s not as egregious an investment as the London version (tickets start at $69). But there’s still the tricky fact of Rowling’s royalties. There’s no concrete information on exactly how her payment for the play works and obviously it’s a personal decision but I just want you to at least think before you buy because the Wizarding world isn’t strictly the source of goodness and comfort it once was and you should remember that if you’re going to participate.

But, everything else aside, is Cursed Child good theatre? Hmmmmm maybe? Sort of. It has moments of splendour (an artfully executed duel that uses human creativity rather than technological trickery was the magic standout for me) and the revised script is about 300x better than the original so I’m confident in at least saying that, strictly as a piece of theatre, it’s not bad. Condensing two full length plays into one two-act play trims so much fat that the pace rollicks along quite delightfully, leaving less room for the obvious, syrupy dialogue that fills the original version. Fewer characters use 30 words when they can use 7 so, even with a plot that hinges on changing something then fairly easily unchanging it, the whole thing feels a lot less like a waste of time.

The other absolutely crucial development in the script revision is the loosening of the shittily normative restraints around Albus and Scorpius’ relationship. The original drips of “no-homo” energy as both boys are given lame shrugs at lady love and the language around what they mean to each other is very carefully limited. But the new version allows them the right of honestly verbalizing what they mean to each other. While avoiding making the romance explicit text, the new script (and these particular performers) very strongly lean into the idea that that’s what this in, even if the 14-year-old boys don’t quite even know it for themselves yet. And even if it’s not romance, which you can boringly believe if you so choose, this version better understands that love is lots of things (the uber-powerful spell at the very centre of the Potter magic is a mother’s love after all). The old version called the magic bond “friendship”. Even if it is friendship, it should still be called “love”.

The Canadian cast is aces. Sara Farb and master of disguise Steven Sutcliffe are particular highlights and I got a real thrill out of the insightful casting of Brad Hodder as Draco. My favourite character in the Potterverse (I will not be taking questions at this time), Draco feels very safe in the hands of the sensitive and thoughtful Hodder who is so often cast as villains whether that label is earned or not.

The story remains pretty stupid, balanced very precariously on dumb kids being so so dumb. The character interpretations are fairly shallow as written and nothing here really contributes to the canon in any meaningful way beyond Scorpius being kind of a cool kid. The effects, though admittedly fun, are icing not cake. If you don’t know or care who these people are and what they’re going through, I promise the floating dementors will not be enough for you (there’s a little HP 101 guide in the program but newbies will still be undoubtedly lost). This is fan service, full of cameos and shout-outs and little nods to Rowling’s original sprawling universe that so many of us know perhaps a bit too well. It’s up to you to decide to opt-in. I’m here telling you it’s cute but unnecessary, well-executed and not nearly as bad as I thought it would be, but I’m telling you that without having spent a dollar to see it. You can love Harry Potter without The Cursed Child. I promise sometimes, no matter how much something means to you, it’s ok to just let the ending be the end.