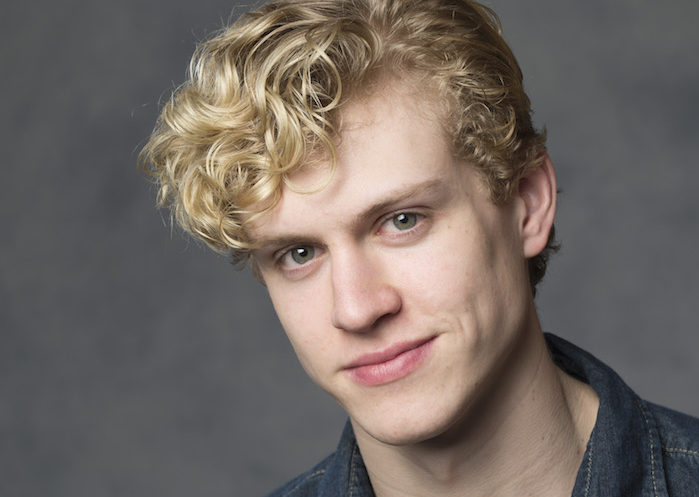 “Master Harold” … and the Boys (co-produced by the Shaw Festival and Obsidian Theatre Company) was a heavy, wordy three-hander with a ton of weight falling onto the shoulders of Outstanding Supporting Actor nominee James Daly in only his second year at Shaw. As the naive “Master Harold”, James beautifully captured how an ugly society can make us ugly ourselves.

What attracted you to the role?
After my first read of the play, I hated Hally. . . . I’d never been cast as somebody I didn’t like before. And then realizing I was going to have to find a way to love him and make others love him. That was an attractive challenge.

Are you someone who does a lot of research going into a role with such a specific time and place? What were some of the most interesting discoveries you made that informed your approach to the role?
I certainly did a lot of research going into this role. Learning about the segregation laws in Apartheid South Africa was sort of unbelievable. But what was most interesting, and useful for me, was not examining how different my world is compared to theirs, or how different I am compared to Hally, but how he and I are similar. I’d like to believe that I’m not a racist person whatsoever, as I’m sure most of us would. Without realizing it, social and systemic racism has been bred into us for so long and it’s not an easy thing to reckon with. So, trying to relate to Hally was an uncomfortable thing for me to do, but necessary for me to play him truthfully. . . . I think if more people would stop saying “I’m not racist!”, but consider the possibility that you are, everyone is, and it’s probably not your fault, then we can begin to change it.

Andre Sills is also nominated for his role in “Master Harold”… and the Boys. Tell us about developing your complex relationship with his character.
I was very lucky to have Andre as my partner in this show. He and I, as well as everybody in the room, had a similar theory for creating our world. Which was, essentially, going for it and not holding back. Committing to playing until we have to fight. And not being afraid to hurt each other. It took a lot of trust, but I think we both felt great freedom and confidence in each other.

Director Philip Akin is a legend. What were some of the most interesting conversations you had with him throughout the rehearsal process?
Philip has a wonderful way of getting everybody in the room speaking the same language. He has his own vocabulary. The way he talked about acting was inspiring. He compares a character to a blanket, and every time you run a scene, you add a thread. So nothing is ever wasted. And after a while you have a design. Some threads are brighter than others, but they’re all in there.

South African is a pretty specific accent. What are some of the key details to getting it right?
I would say a solid vocal warm up is key. It’s a very acrobatic sort of accent, wide vowels and lots of lips. Nailing the vowel shifts on words like “mouth”, “alright” without going all the way to Australian, and words like “although” without slipping into cockney is tricky. Softening the consonants at the beginning of words is key, and sometimes using a rolled “r” or a wet “t” at the end of words helps sell it.

What were you hoping the audience would take away from the show?
I was hoping the audience would feel the ugliness and the damage caused by racial prejudice, of course. But also it was a goal of mine to make people feel conflicted in their feelings toward Hally. If the audience just hated him that would be too easy and there would be nothing to learn. They’d just see another example of white supremacist behaviour and how disgusting it is and they’d leave feeling discouraged and ashamed. But if they liked Hally at times, admired his spirit or empathized with where his anger was coming from, then maybe they’d see that racist people aren’t all evil and their prejudice has usually been taught to them and it needs to be treated like an illness or a disability. It’s awfully hypocritical to ostracize “racists” because they’re a group of people that think differently than us and we don’t understand them.

Did the production change much when it returned for the Toronto run? Was the audience reaction different in the bigger city?
The production didn’t change too drastically when it came to Toronto. The space was different; we went from a thrust stage to a proscenium style stage with a gap between us and the house – so that took some getting used to. For a while, it felt like I was in a familiar place but something was off, like a dream where you’re home but it’s not your house. Or like an actor’s nightmare where you’re doing a show you’ve done a hundred times, but elements are different and everything is falling apart. Not that it fell apart, by any means. We had some of our best runs of the show in Toronto. My best show overall was the Sunday matinee in our first week in Toronto. As far as my standards for myself go.

Do you have a favourite moment in the production?
That’s a tough one. Probably when I got to make myself a lime ice cream float and eat it on stage. Kidding! The section between Sam and me about our kite memory was pretty special. But, I think my favourite part was the second monologue I do on the phone where I’m switching between talking to my mom and my dad at the hospital. That was probably the biggest acting challenge I’ve had in my career so far and sometimes I felt like the worst actor in Canada, but when I was in it, it was fun and it felt like magic.

You also starred in the Ross Petty Pantomime this winter. Tell us about that experience. Do you have any fun kid interaction stories from that run?
Sleeping Beauty was the opposite experience from “Master Harold”. It was really fun. I loved working with Ross Petty and Tracey Flye and Bob Foster and everyone on the creative team. It was a huge production and I got to basically be a pop star every night on stage. It was nice to do something silly and musical after experiencing the weight of Harold for most of the year.

There’s a section in the show where we bring some kids onstage and Sparklebum, played by the brilliant Paul Constable, interviews them. And there was one show where this little girl came onstage and she was so excited to be there she kept jumping and spinning and yelling all her answers to Sparklebum’s questions . . . she had everyone on stage and in the audience in fits of laughter. It was beautiful. I’ve never seen someone that excited to be on stage. Or maybe she was just hopped up on sugar after intermission. Either way, I thought this is exactly why we do this.

What are you up to now/next?
Right now I’m in rehearsals for a play at The Tarragon Theatre called The Millennial Malcontent. It’s written by Erin Shields and directed by Peter Hinton. We run from March 8th to April 9th and it’s gonna be hilarious. It’s loosely based on a Restoration comedy and set in our contemporary hipster world and it sort of mocks and celebrates all that it is to be a millennial. It’s great.

Do you have anything you’d like to add?
I’d like to thank MyTheatre Awards Toronto for the nomination!