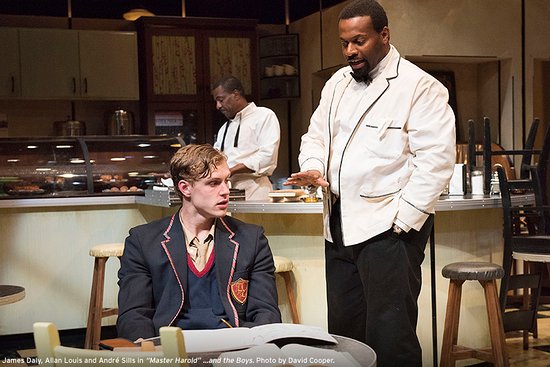 “Master Harold”… and the Boys
This South African-set one-act by Athol Fugard takes a long time to get going but, once it does, it’s a gut punch. The idea is that James Daly’s charming brat Hally is super chummy with the two black men who work at his family’s diner (his parents are offstage dealing with an ongoing medical situation) and all we’re doing is watching a fairly regular day in their lives as normal people living under apartheid. It’s a lot of inconsequential banter about homework and ballroom dancing and, for most of the play, the heart of the matter lies entirely in sidelong glances and throwaway comments. The criminal power dynamic at play feels like a gun held under the table, only the person holding the gun doesn’t fully understand how deadly said gun is and how dare his hostages prefer him to keep his hands where they can see them. André Sills delivers a performance in “Master Harold”… and the Boys that should be shouted about from the rooftops, foiled perfectly by Daly’s brutally naive bombast and unfeeling privilege. All the best things at Shaw this year require patience but this one has the biggest payoff.

Sweeney Todd
There are a few roles in the musical theatre canon that are so acting-heavy and/or singing-light that you can cast basically anyone you think can carry the story and not really worry that it’s a musical. Henry Higgins, Officer Lockstock, even Tevye if you want to push it- by all means, cast the prestigious actor who maybe lacks vocal technique. I guess I have Johnny Depp to blame but I will never understand how Sweeney Todd came to be considered one such role. This is Sondheim, people. That means hard scores with big ranges and the non-negotiable requirement that the performer be able to move the audience with their voice. This strange, beautiful score demands a Sweeney who can rumble and soar, Benedict Campbell croaks and groans. Corrine Koslo as Mrs. Lovett screeches and squawks, failing to make at least half her lyrics intelligible. Neither acting performance does anything to ease the pain of substandard singing. Jeff Irving (Anthony, his “Johanna” to die for), Marcus Nance (Judge Turpin, his “Johanna” to live for), Kyle Blair (Pirelli, a complete scene-stealer) and Andrew Broderick (Tobias, the production’s emotional saving grace) are on hand alongside a killer ensemble* to bail some of the water, but the boat sinks nonetheless.
*(Here’s where I complain that Kelly Wong gets only a line or two of solo; it’s the opening line and it’s the best vocal in the whole production. Such a waste.)