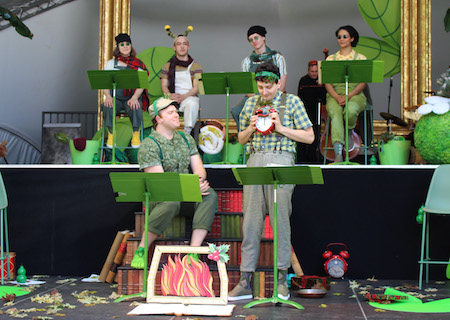 Robert & Willie Reale’s musical adaptation of Arnold Lobel’s Frog & Toad books is so deliriously pleasant that I nearly got heatstroke sitting in the uncovered section of its outdoor audience at the Shaw Festival and barely noticed. My cheeks hurt from smiling and I cried so much that it’s better measured by time than instances; it was the whole time, because nothing gets me like kindness and true friendship in a harsh landscape.

Director Jonathan Tan’s cheeky, fast-paced, earnest, and exuberant production incorporates just the right amount of movement into a concert setup with Judith Bowden’s creative minimalist costumes helping the show to feel like a full theatrical experience rather than a taster (which is not to say that the Shaw shouldn’t return to this piece with a full production, because I’d be the first one in line).

The cast all deliver infectious energy and heart on top of their performance level of excellence that is never short of a guarantee at the Shaw Festival but still needs to be noted lest we dare start taking it for granted. An Andrews Sisters-style chorus credited as birds but really playing a whole host of supporting animals is just casually made up of three of the most celebrated musical theatre artists in the country (Alexis Gordon, Jenny L Wright, and James Daly who it’s great to see on his feet since an injury pulled him from Damn Yankees). They hilariously and artfully flesh out the world of Frog & Toad’s glorious swamp, along with Graeme Kitagawa who brings a lovely voice and charming vulnerability to the role of an ambitious snail tasked with delivering the mail.

The stars of the show are Drew Plummer and Mike Nadajewski who show off the lighter side of their fantastic chemistry, developed by unexpectedly playing opposite each other nearly every day in this and Damn Yankees (where Plummer stepped in as a long term understudy). Nadajewski is a longtime favourite of mine with unmatched comic timing and theatrical flair. He’s a grumpy delight as the misunderstood Toad, foiled brilliantly by the totally winning heartfelt bombast of season highlight Drew Plummer who’s stepped out of the chorus this year to incredible success. With a stunning baritone and a sincere manner that is instantly endearing, Plummer is impossible not to root for. Together, Plummer and Nadajewski form an irresistible yin & yang that elevates the entire season and perfectly embodies the specialness of the bond between Frog and Toad.