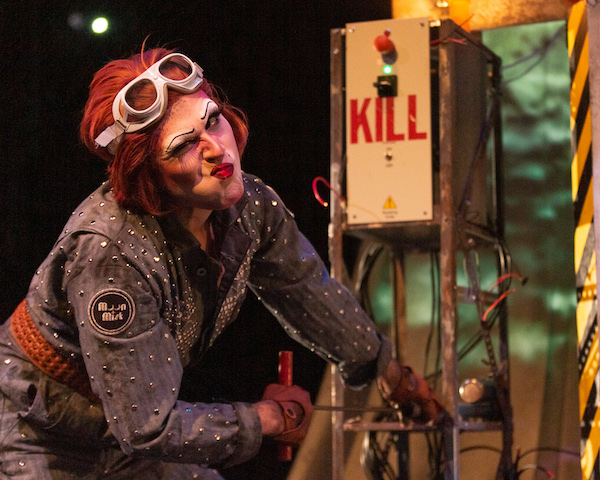 Justin Miller’s beautiful drag clown Pearle Harbour lives simultaneously in the past and the future, a wise fool with a sharp wit and a big beautiful heart that’s too often broken.

In Distant Early Warning, her new dystopian solo show at Buddies in Bad Times Theatre, she’s alone and in love, totally helpless and also maybe humanity’s only hope. She sings jazz standards and does a sultry strip tease while pulling glass shards from her rapidly deteriorating body in the gloomy remains of a post-nuclear world. She holds on to so much false hope that it passes unreasonable and circles back around to being almost admirable. She loves and loves and loves and loves the only person there is to love as if it’s the love itself that keeps her alive not any sort of anything she gets in return, because there’s never anything in return. There’s never anything much at all. There’s barely any cigarettes left.

I’d be lying to you if I said all the apocalyptic details of Pearle’s specific situation made total sense to me. Exactly what happened and why and where she is and when and what she’s supposed to be doing and why and with whom if there even are any other whoms left- if the answers are in either the show or the cute survival manual program, I missed them. Pearle is an unreliable narrator of her own story and Miller’s script smartly avoids dwelling on hows and whys when he can focus instead on how it feels. That part comes through with perfect clarity.

Jackie Chau’s functional set design is thoughtfully packed with character and tone details but remains cleverly vague in its apocalypse-chic universality. The production has a massive crew of designers and craftspeople and that ‘it takes a village’ approach to a notably solitary story results in incredible technical proficiency across the production. Chris Ross-Ewart’s sound design is perfectly showcased by laser sharp technical execution by the maestro combo of stage manager Giuseppe Condello and show operator Kit Norman.

From the technical elements to Miller’s artful physical comedy to the perfect line of Pearle’s signature red lip, there’s a precision of execution on display in Distant Early Warning I’d gotten used to not seeing in post-pandemic theatre. While most companies are still scrambling onto their feet, we’ve been grading on a curve, awarding extra points for allowing us the opportunity to sit in an audience at all. Not for Pearle Harbour. She’s facing down the apocalypse and bleeding profusely but somehow she’s stronger than ever.

Distant Early Warning plays at Buddies in Bad Times Theatre until May 29.