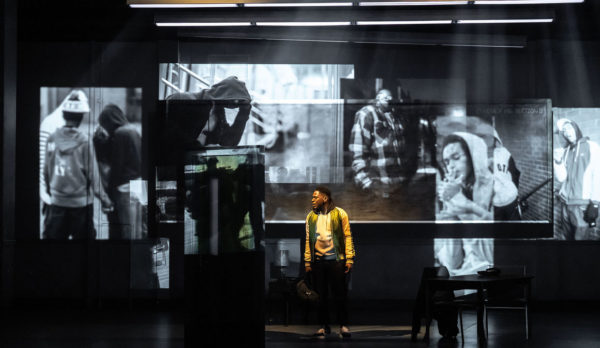 Pipeline is the perfect work to mark Soulpepper’s return to live theatre. Dominique Morisseau’s exploration of how American public schools set black boys up for failure at best and prison at worst was part of a 2020 program postponed by the pandemic. After two brutally long and tough years, director Weyni Mengesha and this cast have delivered a performance worth the wait.

Nya is a teacher trying to stay afloat while helping her students survive in the stressful crucible of a public high school. Private school has its own problems for her son Omari, who risks expulsion and the collapse of his flimsy future when he is recorded assaulting a teacher in class. Omari’s father Xavier (Kevin Hanchard) is an imposing presence even before he shows up at Nya’s classroom to restore order. Nya wants him back; Omari hates him for leaving.

This fragmented family is the heart of Pipeline and this production works because this unit is more than the sum of its parts. All three actors excel in their roles individually and sizzle in their encounters on stage. Akosua Amo-Adem’s Nya is compelling across the board – a skilled educator in command of her classroom, a mother baffled and hurt by her son’s anger, and an occasional but crucial source of levity as she bounces off the other men. Tony Ofori walks the emotional tightrope of Omari with a deft skill – consumed by anger but sometimes endearingly tender, dutifully throttled in his emotions and communication as a teenage boy but deeply expressive anyway. The vital but impossible bond between mother and son comes alive when they are together.

Pipeline’s wider worldbuilding is strategic but effective. The implicit and explicit racial dynamics that inform the work are undeniably American but are still grimly familiar to Canadian audiences as well as Ofori himself, a veteran of the Toronto education system. Omari’s private school experience isn’t central to the plot as it could easily be in another ‘fish out of water’ tale but Morisseau uses it to expand Omari’s world while making his plight even more personal. Cut from the same cloth, his girlfriend Jasmine delivers withering put downs of the entitled snobs who surround her. Security guard Dun’s flirtation with Nya lightens the mood but his mere presence is an omen. Older teacher Laurie, the only white character, borders on a caricature in her insensitivity (which often borders on something worse) but she is trapped too – having just returned to school after suffering violence there, she is a helpless witness to more violence between her students. As she berates the overworked Dun for not arriving in time to help, it’s clear the system has failed everyone here in some way. Omari may have escaped to a school that doesn’t need security guards or metal detectors but his demons follow him there – he will have to fight those himself.

Creative set design by Lorenzo Savoini adds an immersive feel. Projections and a rapidly rotating floor keep the action moving and the audience engaged. As Nya gives a poetry lesson centred on Gwendolyn Brooks’ We Real Cool – a recurring and chilling motif in the play, voiced and brought to life by Ofori – it’s easy to feel like a schoolboy again, hoping for once to avoid attention. Unlike the poems and stories our teenage selves had to torture for meaning to satisfy a teacher, Pipeline is a joy to watch and write about.