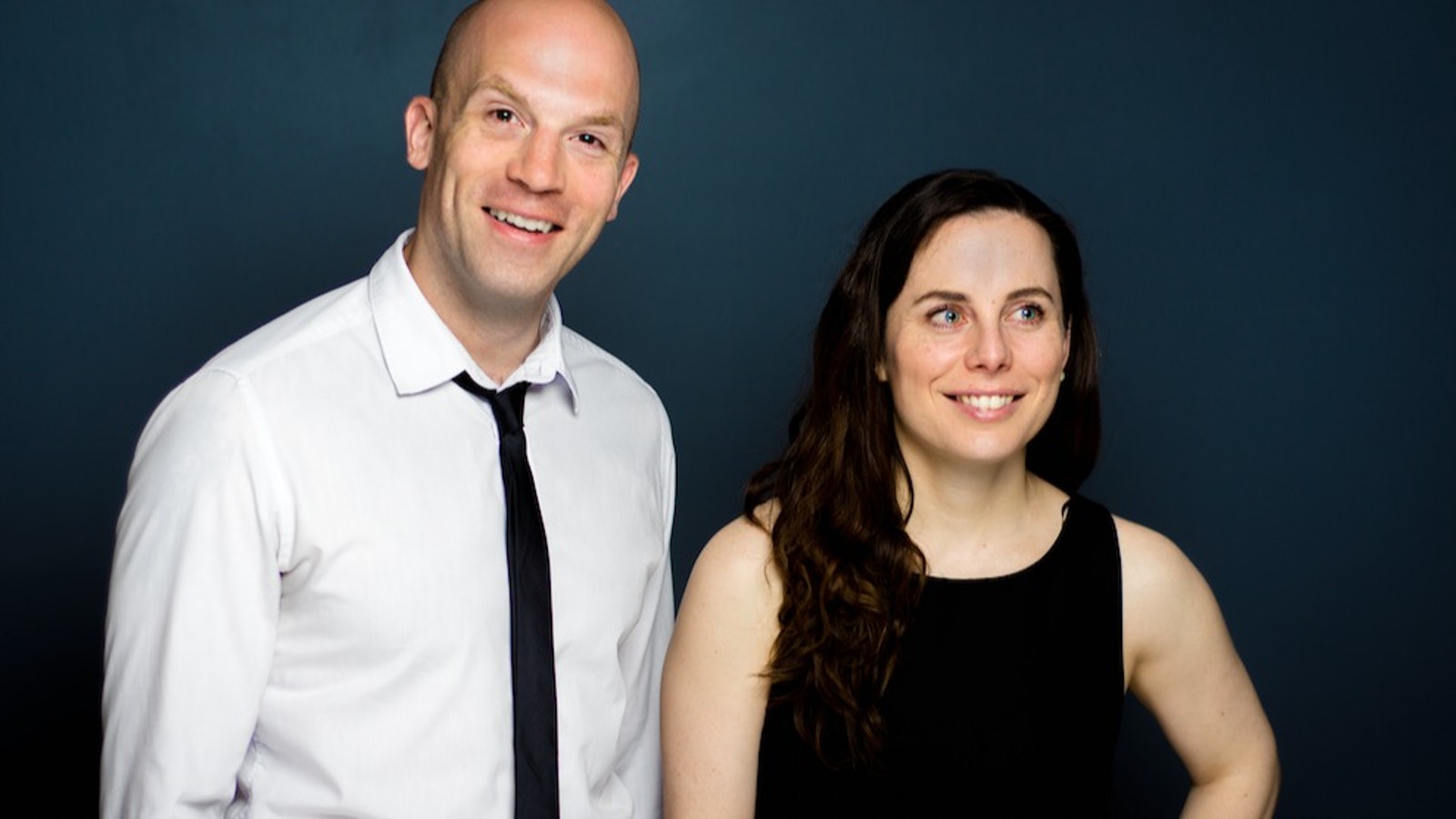 Death Ray Cabaret (A-)
Second City stalwarts Jordan Armstrong and Kevin Matviw bring a wonderful verve to their free-wheeling Fringe show. Partners on and off the stage, the pair have a fun and easy dynamic that lets them skip between sketches without missing a beat. The intimate setting of the Monarch Tavern works well for cabaret (although it is a little limiting for physical movement) and makes it even easier to be dazzled by the lights (and sounds, and sometimes a full-on assault on the senses) and participate in the experience – as fully as possible, in some cases. Many Fringe shows are sincere, if occasionally clumsy, attempts to convey a message or share an experience; Death Ray Cabaret certainly covers an impressive range of themes and ideas with a deft touch but is best enjoyed as a refreshing interlude, an excuse to relax and roar with laughter.

Didn’t Hurt (B+)
Rodney DeCroo bares his soul in this brutally honest autobiographical work that definitely does hurt. He opens the show by reassuring viewers he understands if they leave and it’s an important disclaimer – the trauma he recounts will have ripples in the lives of many audience members. We follow DeCroo’s journey as he grows up in an abusive household with a father scarred by the war in Vietnam through a tumultuous adolescence and adulthood as he struggles with the resulting PTSD and tries to break the cycle of trauma. As the family moves back and forth before splintering, DeCroo uses his gifts as a storyteller to bring the new scenes and characters to life while preparing the next gut wrenching reveal. His experiences are deeply personal but highlight larger issues around poverty, violence, and masculinity that affect many people and anyone in their orbit. It feels almost nonsensical to grade a show like this or evaluate it by any usual standards. It may be enough to say that DeCroo appears satisfied that he is telling his story how he wants and that listeners are receiving it how they should – not enjoying it, but at least grateful they heard it.

Dandelion (B)
Dandelion is a one-man and one-baby show that leaves you with a fuzzy feeling even if you’re not quite sure how you got there. Aaron Malkin takes the stage in a lurid yellow and green suit for a meditation on fatherhood – his own, his father’s, and dad jokes as an enterprise. The playbill promises “spot-on comedic timing, jaw-dropping physicality, and live science experiments” but there’s little of that on display (though the timing is pretty good!) and the show’s charm lies elsewhere. Malkin knows how to hold an audience and his natural banter puts them at ease. Rather than the sleek, polished performance expected from the taglines, Dandelion is often meandering and awkward – but in a good way. It’s a sincere performance that overflows with Malkin’s love for Julian, the real star of the show, and offers thoughtful reflections on what it means to provide for your family and chase your dreams – with a short break to mash your face in a tub of butter.

Boys Don’t Cry (B)
An impressive showing by the young writer and actor Mateo Lewis, Boys Don’t Cry is a musical that will make audiences laugh, think, and maybe even shed a tear or two. Pushed by his late, stern father and aggressive, athletic brother Brock into fitting society’s model of manhood, Jayden struggles to express himself until he meets Rosanne (Aveleigh Keller), who emboldens him to embrace his sensitive side and stand up to his tormentors at school and home. The show is technically and musically tight and the main cast turn in solid performances in challenging roles (the character of Brock is rather stereotypical but that stereotype is one that doesn’t allow for much complexity or self-examination, so it tracks). Lewis himself is a compelling Jayden and the switch between him and his younger self (Zach Stahmer) is used often and well as a narrative device. Though this is the story of Jayden(s), the script encourages meaningful interaction between the other characters – Rosanne’s uneasy introduction and confrontation with Jayden’s mother Carol (Sara McMillan-Stahmer) over their own ambitions in life and expectations for relationships was the best scene of the show for me. The delivery works but the larger message is taken somewhat for granted. Brock’s sudden transformation is a happy ending but not a realistic one for anyone who has dealt with a Brock as a Jayden or a Rosanne. Much like many Toronto theatre audiences, Rosanne believes that boys do and should cry and knows all the right words to express that idea but isn’t at all self-critical about it – she admits that she’s drawn to the type of guy embodied in Jayden’s unimpeachably masculine football teammates, validating that masculinity with her attention and suggesting that Jayden’s emotional availability is more of a fun novelty than an actual appeal, and notes that she has put up with that lack of availability in past relationships even when it left her unhappy. It takes a Rosanne to break him out of that shell and her ignoring his boundaries to do it; what happens if no dubious saviour swoops in to rescue him? Meanwhile, the older Jayden’s openness is seen as brave and praiseworthy because of the contrast with the safety and comfort his newly overt masculinity would normally afford him – it’s unclear if Rosanne, the reformed Brock, or Jayden himself would have any sympathy for a boy who shared Jayden’s love of poetry but not his good looks or athletic accolades. Philosophical issues aside, Boys Don’t Cry is a well executed offering from a figure I expect to see a lot more from very soon.

Lights! Camera! Odd Jobs? (B-)
In this autobiographical piece, Arthur MacKinnon takes us through his life as a failed (then successful-ish, then failed again, and now touring the Fringes of Canada so who knows?) actor, from his early inspiration and introduction to acting as a child to his continued frustration as an adult looking for his big break. It’s a relatable tale for all but the luckiest actors – his stories of picking up whatever work he can find hoping for his agent to call with good news will be familiar to many viewers. If it’s realistic, it also doesn’t have the qualities that keep a story moving: his history is a slow grind with few major twists or turns and can feel like a series of disjointed anecdotes. Perhaps Arthur himself felt differently in the moment but the Arthur performing for us remains remarkably chipper throughout – admirable in a way, but it doesn’t help to foster emotional investment. Some of the characters who figure only briefly – a boss at this job, a client at that one – are more colourful than the story’s star. Audiences will like MacKinnon and hope and expect for him to make it big; until then, his show is fun but lacks a certain punch.

Scadding (C)
The eponymous Scadding Court Community Center plays host to a walkaround series of audio plays for this supposedly immersive experience. Participants become acquainted with the Court’s facilities and the intersection of Queen and Bathurst before looping around to the skate park and the Postscript Patio to rest their legs (or the other way round, finishing their pilgrimage at the conveniently located Tim Hortons). At each stop you unlock an audio play linked to that location. Some of these vignettes have an interesting premise but none of them is long enough to do much with it. Listeners don’t interact with the content or each other so it doesn’t feel immersive (or theatrical, really). The show is site-specific in that it is hosted at this place and references it but it’s unclear why the Court is meant to be an ideal venue for this type of show; the stations are close enough that walking between them feels like a brief tour rather than any real exploration. The Court is a nice place to visit but this isn’t a great medium for it.