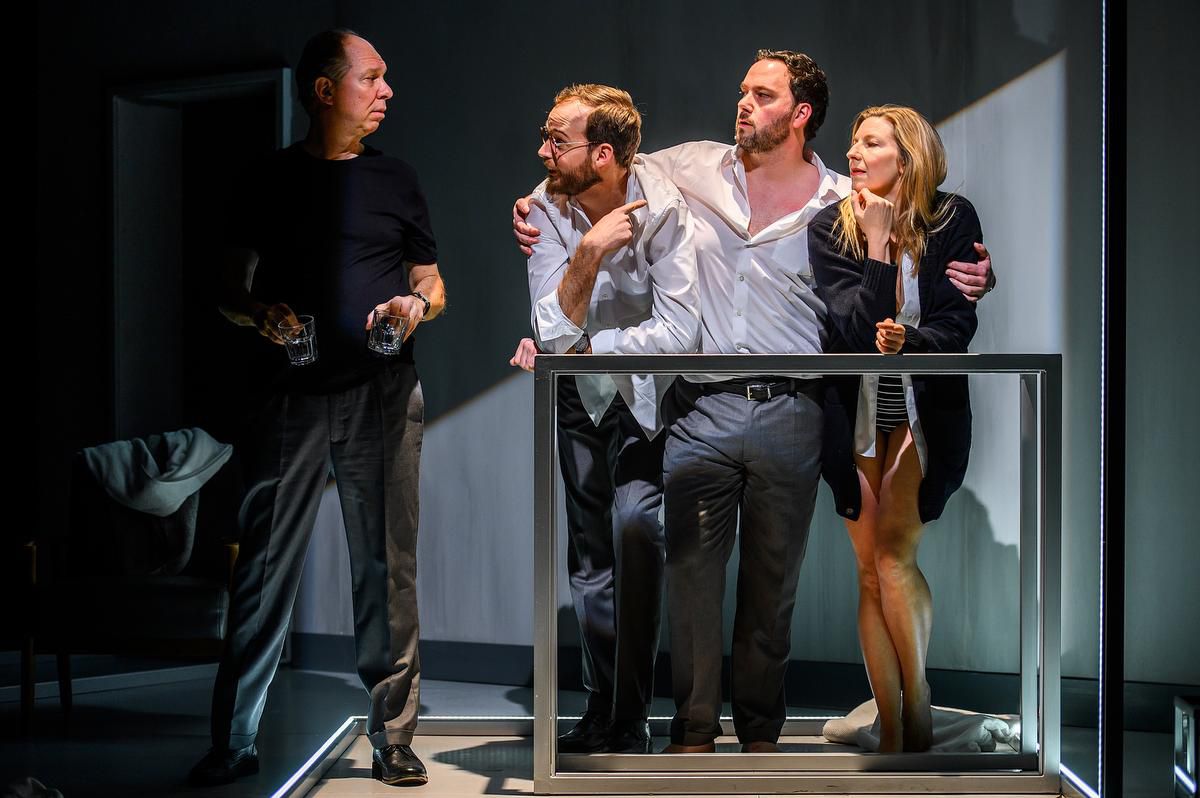 Awkward silences are your fault.

They’re their fault too. A group – or an entire pair – with expired imaginations aching to pretend to be someones with something to say. If you could all shut up for a moment you might enjoy the thought that you’re in a Pinter piece where silence is not an aberration but a celebration.

As I was saying, Soulpepper begins their winter season with a compilation of Pinter’s short plays spanning the half-century of his career. Most of these, if once celebrated, have been forgotten: such an extensive canon is defined by a handful of full-length works and even the most delightful vignette can’t demand the effort to stage or see it by itself. If “Night” (1969) comes to town it’s as part of a lineup enjoyed and understood as a whole; each sketch makes a special offer to each audience. This is wonderful for directors, who get to paint a million permutations on a stained canvas, and critics, whose attempts to squeeze meaning from deliberately minimialist minutes can be channeled into dissecting those choices instead.

Director Thomas Moschopoulos puts together an enticing medley for Little Menace, a nod to the “comedy of menace” often discovered in Pinter’s work; such an obvious pun (you get it, right?) is as offensively un-Pinteresque as the idea of anything being Pinteresque. Pinter took pride in resisting formal description of his work; “What I write is what I write”, the once-great once-man once intoned, a fine maxim for those not under the thumb of a brutal editor. Of course, that freedom is unlocked through a total commitment to the absurd*. Crafting a sincere, coherent story requires a care that carries the author’s voice; Pinter’s whatever-you-call-it takes a rare skill that’s identifiably his but that operates under different constraints. In any case, his distance is needed to maintain the sense of mystery and menace that makes his work tick. When every word is drooping with subtext, lifting the lid exposes the line as a boring, blunt instrument; the magic dies when you know how the trick works.

If a line fails, you put it down. You sweep the line under the rug. You take the rug out back and shoot it. The stakes are different for Pinter. An awkward silence that isn’t awkward is a miss; an awkward silence that’s too awkward is awkward. A phrase meant to (or vice versa) say a lot while saying nothing at all can mumble perpendicular platitudes instead. Much more so than a normal work, a Pinter play relies on performers and viewers colluding to sign that social contract: all of you must be in on the joke, even if you’re not quite sure what the joke is. The text doesn’t stutter for itself. It’s not hard to see this as easy – as anyone (with anxiety) wouldn’t tell you, you can find a little menace in anything if you don’t want to – but not every Tom, Dick, and Harold could do what Pinter does. Alex McCooeye and Gregory Prest are excellent here, handling each other with the right blend of camaraderie and dread.

As he was saying, Moschopoulos fields a thoughtful selection of Pinter’s work. The repetition of “Apart from That” (cycling through characters) as a bookend and at several transitions defines the show and is fitting-but-certainly-not-Pinteresque proof of the value of repetition in that piece and beyond. The other shorts are fleeting interludes that tease out the right reaction for just a moment; a longer dialogue. “Victoria Station”, is a success for Diego Matamoros as an unhinged and unpredictable taxi dispatcher. Shannon Lea Doyle‘s set is an ideal backdrop, a clinically and eerily white-ish room lit by loitering, pendulous rectangles. The show does a lot well and, well, a lot.

The main star of this showcase is a disappointment. “The Basement” features McCooeye and Prest as roommates and rivals in a love triangle with Maev Beaty‘s Jane, with Matamoros narrating the stage directions. The play, adapted from a TV play adapted from a screenplay, loses a lot in translation to the small stage, plodding in a painful contrast with the shorts’ snappy pacing. It’s the most prominent role of the night for Beaty but wastes her talents, sadly underused in the rest of the show too. It shares the tone of other Pinter but gives the audience too much time to reflect: the elephant in the room crushes the weasel under the cocktail cabinet.

Like many lives, Little Menace is full of fun events sidelined and undermined by a dull lead. Apart from that, there’s not much to say.

*but NOT the grotesque