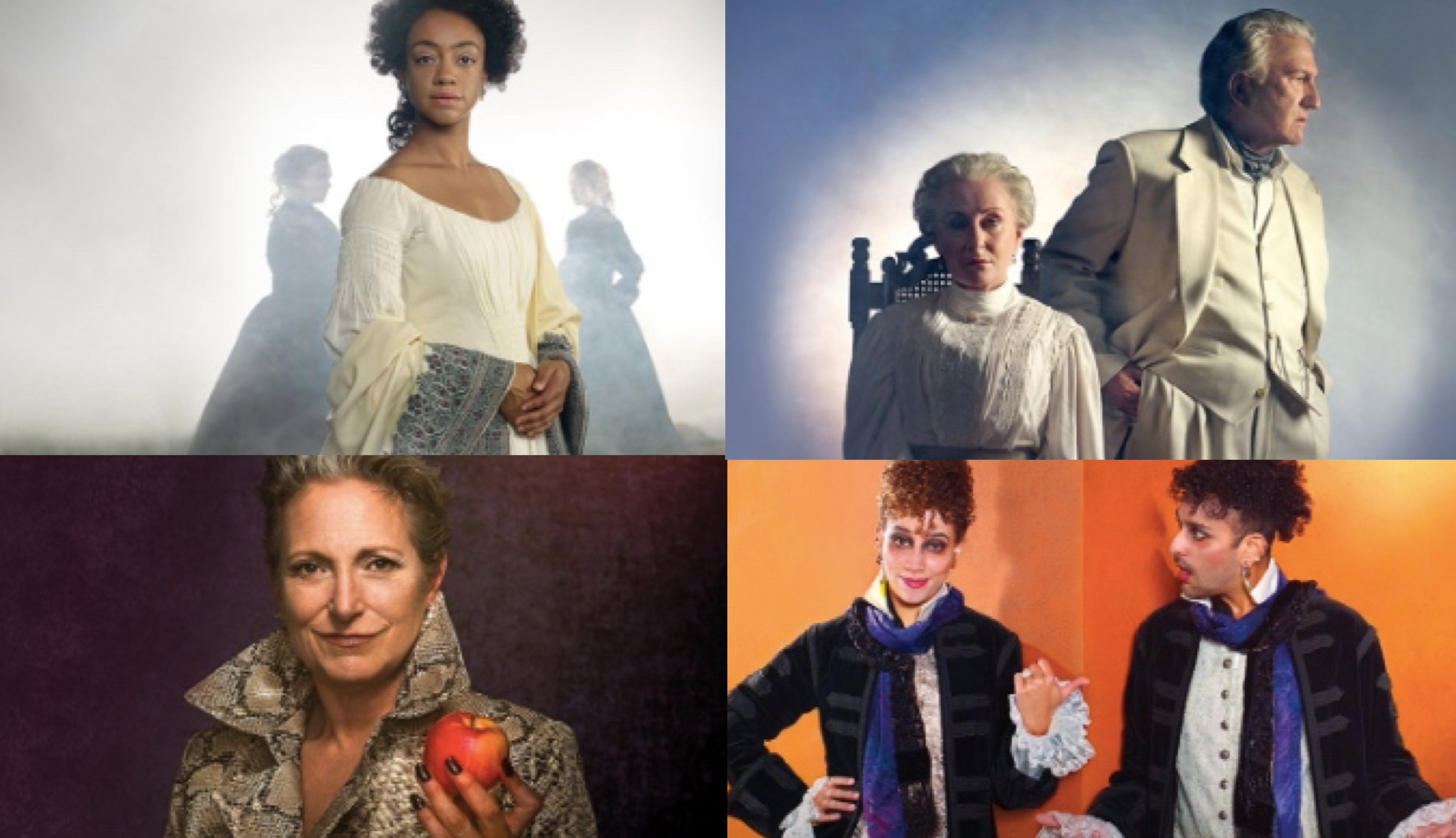 Paradise Lost
Lucy Peacock is a fabulous spotlight-stealing supernova as Satan in this excellent new adaptation by Erin Shields. She wears fabulous clothes, says fabulous lines, directly addresses the audience, and just generally swags the place up. But the really compelling stuff comes from Qasim Khan and Amelia Sargisson as Adam and Eve. They’re a perfectly cast pair, both beautiful and honest and funny and vulnerable in pretty much everything they do. Their connection is the heart that ties the piece together and their journey towards toxic “enlightenment” and modern gender relations is the complex and breathtaking arc that sets Paradise Lost apart. The design (Judith Bowen), the direction (Jackie Maxwell), and the angel hijinks are stylish, entertaining, and creative in a way that’s really refreshing for Stratford but the real stuff is on earth with the humans.

The Comedy of Errors
Every time I review Comedy of Errors, I reiterate that it’s my least favourite play in Shakespeare’s canon. I think it’s really really bad. While obviously subjective, this take is the first thing you need to know about every production of Comedy of Errors. Firstly, because a bad play is a bad play and when you buy your ticket I want you to know going in that, no matter how great the production may be, you’re still going to be seeing something fundamentally lightweight and silly and mostly nonsensical. Secondly, because my opinion of the play and its flaws affects what kind of take I think is most effective when producing it. A really flawed text needs more than a great one- it needs interpretation, creative casting, sometimes a really heavy lens. Keira Loughran has given all that to Comedy of Errors for her one-act Stratford version this season, and it certainly livens up the proceedings, but I think it’s a mistake to read too much into certain aspects of the interpretation. Aided monumentally by a strong ensemble and Joanna Yu’s season-stealing design, Loughran has crafted a fun, high-energy production balanced on distinct character personalities and strong relationships. The oft-overlooked female characters are particularly well developed here, Alexandra Lainfiesta playing Adriana with a touch of Jersey Shore-ish extra-ness and Amelia Sargisson balancing her with a cooler head and nerdy charm, and the Antipholus/Dromio bonds are text-elevatingly clear. Though it’s dominated the response to the production, the headline-grabbing gender bending at play doesn’t really impact the actual heart of the storytelling beyond facilitating good casting (Jessica B. Hill is a brilliant Antipholus of Syracuse paired well with better-than-average believable confusability with Qasim Khan who shares her approximate stature and signature hairstyle as Antipholus of Ephesus). Comedy of Errors isn’t about gender at all (unlike As You Like It, Twelfth Night, Two Gents, Cymbeline and to a lesser extent Merchant of Venice where gender plays a major role in the plot, or things like Macbeth where it’s key to the play’s themes) so, while I don’t think asking Comedy of Errors to carry some sort of major social significance is a reasonable directorial request to make of a play that can barely carry the weight of its own plot, I say cast whomever you want however you want because why the hell not? Don’t think about it too hard, it’s just Comedy of Errors, but it’s a good Comedy of Errors.

Long Day’s Journey Into Night
Considering it is widely considered a masterpiece, Eugene O’Neill’s epic family drama isn’t produced very often. At 3.5 hours, it’s a long slog for the audience and, with only four major characters, it’s an even longer slog for the actors, a high mountain very few are deemed worthy of climbing. Perhaps most relevant here, though, is the shadow of greatness under which the new cast operates. Stratford’s 1994 Long Day’s is considered a seminal production in Canadian theatre history and, personally, the 2012 Soulpepper version looms very large as a moment when some of my favourite actors became my favourite actors. So this cast, working in the tiny studio theatre under the direction of Miles Potter (whose work I seem to always want to characterize as “fine” but never more), struggles with comparison. O’Neill’s script is so complex and maddening and heartbreaking and just generally monumental that no one here seems quite able to handle it, not even the legendary Seana McKenna who battles with the outrageously difficult role of Mary Tyrone, at times absolutely nailing the character’s subtle shifts but often fussing and pronouncing too dramatically. Gordon S. Miller is too funny as Jamie, Charlie Gallant too insubstantial as Edmund. Only Scott Wentworth really carves out a space for himself in Long Day’s storied history, his smooth charm conjuring James Tyrone’s matinee idol past in a way that intriguingly argues with his assertions that he should have been so much more. His work in the final act is worth the price of admission and, even if it wasn’t, a true theatre fan is a fool to pass up any opportunity to see Long Day’s Journey Into Night, no matter how merely fine most of its production elements are.

Brontë: The World Without
This world premiere three-hander by Jordi Mand tells the sad story of the legendary sisters who pretended to be men in order to get some of the most seminal works in the English literary canon published. At first seeming like a relatively playful, modern-lensed take on the familiar Brontë story, the play quickly turns towards the predictably morose and the pace slows to a grind. Though Emily (Jessica B. Hill) is by far the most compelling sister in both perspective and performance, and Anne’s “and Peggy”-esque journey is the most intriguingly unexamined by history, the play focuses principally on Charlotte, here depicted as especially domineering, condescending, and hypocritical. The musical interludes transition from fun anachronism to sentimental stalling as the play marches towards its drawn-out conclusion without really taking the time to examine the dark psychological realities of the characters. It’s a story worth telling but it’s not well told.