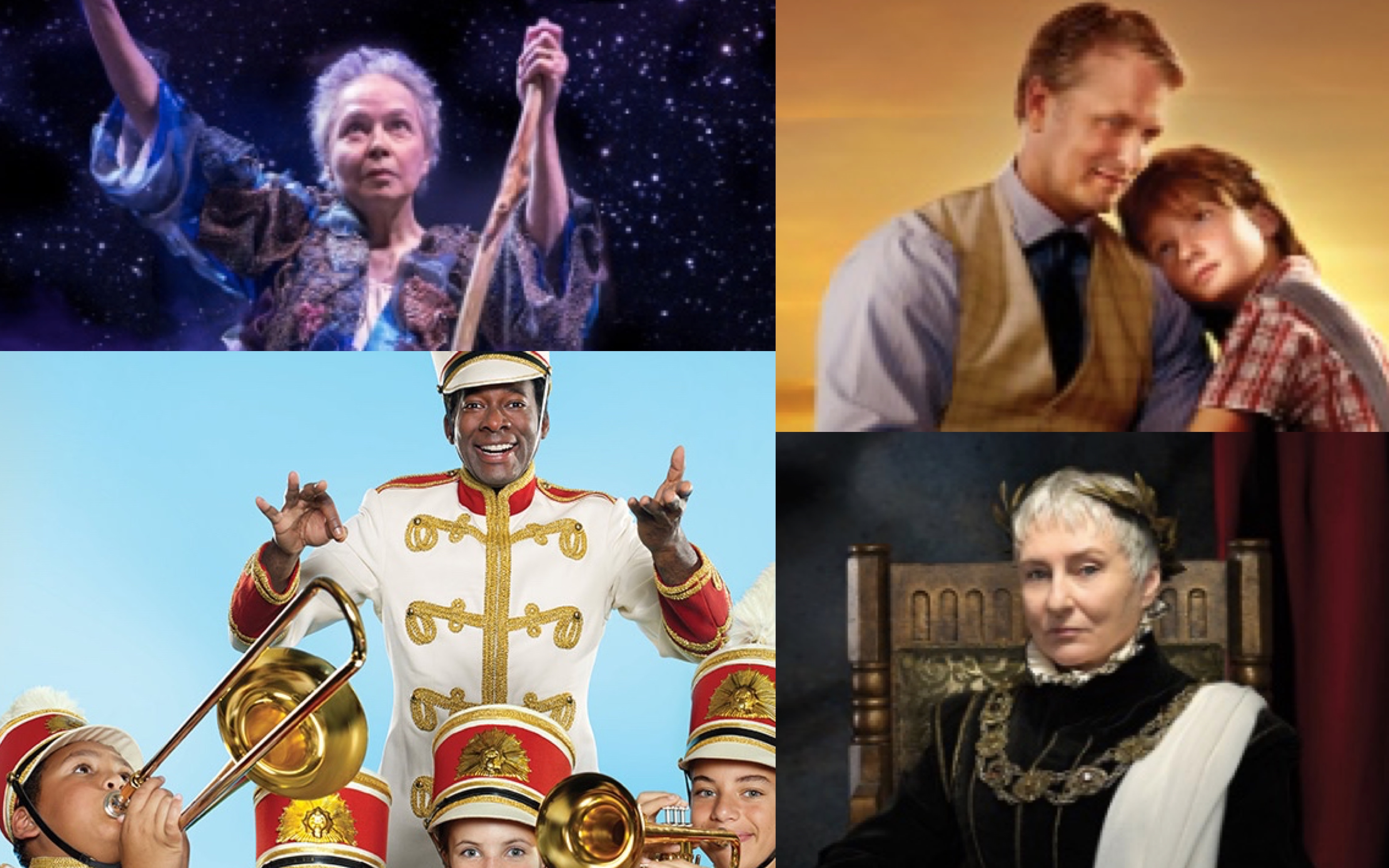 The Music Man
The best production at the Stratford Festival this year is an incredibly dated musical with a couple good (not great) songs and a story made of truly silly stuff. But there’s a reason Stratford asks so much of Donna Feore every season- basically handing her their full musical slate and saying “go, fix this”- she’s the best. Her choreography is flashy and fun, her ensemble work fleshes out the action around her core dancers to create unmatched spectacle, she keeps the energy up and the pace moving and the good times rolling like no one else can. The opening train scene is executed with brilliant precision by the male chorus to set the show on the right foot and “Seventy-Six Trombones” has a delicious ‘more! more! more!’ feeling that reminded me of THIS. But while it’s certainly her song and dance skills that Feore is known for as a director, it’s her work between numbers and judicious casting that really elevate this Music Man to more than a Music Man. Daren A. Herbert is one of if not the best musical theatre actor working in Canada right now. A great singer who actually started as a dancer and a solid dramatic actor in straight plays, Herbert is irresistibly charming and the best/only choice for the role of smooth-talking con artist Harold Hill. Casting him is pure meritocracy at its finest. But The Music Man is set in 1912 Iowa so the anachronism of casting a black man is a factor, and what makes Feore’s production truly great is how she handles that anachronism. Tossing out total historical accuracy in racial casting is the only responsible way to approach staging dated texts but Feore finds a really intriguing middle ground that obviously can’t fully address the realities of racial oppression in early 20th century America but doesn’t completely ignore the identity of her leading man either. Devon Michael Brown has been the standout dancer in the Stratford musical chorus for a few years now but Tommy Djilas is his first major character at the festival and his presence adds incredible depth to the piece. Beyond Marcus Nance as school board bass Olin Britt, Brown is the only black man among the River City characters and he plays Tommy as quite obviously a good kid who means well. So, when the adults in town lob their “wrong side of the tracks” nonsense at him, it lands with ten times the force it normally would. Herbert adds a note of urgency to his befriending and defending of Tommy and the subtext of their connection is incredibly powerful when Tommy’s place in the community and Harold’s outsider status are tied together by something more than instinct. The Music Man is not a substantial work, it’s just silly fun with character motivations as reliable as Harold Hill’s credentials, but with this production Feore makes it sparkle and Herbert and Brown make it matter.

To Kill a Mockingbird
This Schulich Youth Plays adaptation of Harper Lee’s classic novel is the opposite of Feore’s Music Man. Arguably one of the most important narratives of the twentieth century, To Kill A Mockingbird has gravitas and depth, it knows it’s tackling big issues and so does the audience, but it ultimately comes off a little lightweight (unlike The Music Man which is designed to be light and ended up somewhat profound). To Kill a Mockingbird was a revelatory text for a lot of kids, specifically white kids, and its core message about the importance of empathy will never not be necessary. But in 2018, it’s not the right story to be telling anymore. Sophia Walker gets in some good shots as family maid Calpurnia and Matthew G. Brown has one great monologue as accused innocent Tom Robinson but otherwise the white characters do all the talking. They do all the narrating and the living and the learning and the feeling and, though director Nigel Shawn Williams tries his best to put the play in the context of black history with a photo montage at the start of the show, the focus of the narrative remains imbalanced in a way that’s out of date and just not as useful as it once might have been. The play’s noble white men Jonathan Goad (Atticus Finch), Tim Campbell (Heck Tate) and Joseph Ziegler (Judge Taylor) all give excellent performances, as does the vibrant Clara Poppy Kushnir as Scout (I was less fond of her older counterpart played far too dramatically by Irene Poole), but the book’s tone deaf focus and kiddie hijinks distract from a story that should hit very hard, even for a children’s adaptation. Williams’ only really bold move is to dress the mob that comes to harm Tom in KKK robes, making the racially motivated nature of the attack as explicit as possible. It’s a really impactful moment, the sight of the robes instantly eliciting emotion, but making the town’s racism so conscious and premeditated makes Lee’s points about the dangers of mob mentality, the power of understanding, and how empathy can change a mind seem naive and inconsequential. Williams’ instinct was a good one- a clear-eyed, 2018 commentary- but it was too much for To Kill a Mockingbird, because To Kill a Mockingbird isn’t enough anymore.

Julius Caesar
This production is dull as rocks. It seems to me that it was programmed with the concept that they’d cast women in many of the major roles (Caesar, Cassius, and Antony) and that’s about as far as anyone took the word “concept”. Casting women isn’t interesting enough. It’s not even a concept, it’s just inclusion, at least how it’s done here where the female actors are just playing men so no considerations are made for what being a woman would mean for that character in that story in that time and place. These women deserve the right to play with the roles and be in interesting, creative productions that really bring something to the text. There’s a real essence of “let’s not push our luck” on display here that’s really disappointing. The fights are also truly astoundingly terrible; that’s not relevant to the angle I’m taking with this review but I absolutely could not leave it out.

The Tempest
Antoni Cimolino’s take on The Tempest, on the other hand, gets gender bent principal casting right. At least in theory. This Prospero isn’t just played by a woman but is a female character. I actually think a female Prospero makes more dramaturgical sense than a male one- it strengthens Miranda’s ‘I’ve never seen a man before’ arc, adds intensity to Caliban’s role, and opens up the political backstory to explore misogyny and the societal limits on female power. Casting Martha Henry is, again, in theory, both good inclusion casting and smart directorial casting. Unfortunately she’s just not that good in the production. I’ve never found the legendary Henry as captivating as I’m expected to and she fails to command the stage or bring much distinguishable character to the role. Mamie Zwettler plays Miranda incredibly young which, in addition to making no biological sense, is an annoying angle to take on an already vulnerable and underwritten female character, especially when the male cast skews older. Somewhat annoyingly, all the men are actually the highlights of the production and, as I write this, I’m just now realizing how empty it feels to make headlines with a female Prospero but still allow such outrageous gender disparity when it comes to the rest of the play’s meaty roles. The wonderful Sébastien Heins is predictably lovely as Ferdinand, Stephen Ouimette and Tom McCamus an excellent clown duo, Michael Blake a brilliant Caliban simmering with anger at his oppression. Bretta Gerecke‘s excellent costume work lets us actually seen Blake rather than covering him in something too elaborate, his own sinewy legs as much a part of the character’s memorable aesthetic as the grotesque boil-covered arm and protruding spine Gerecke gives him. The rest of the cast’s women are relegated to the roles of single-scene goddesses or wordless nymphs with stupid headpieces that either look like brambles or jelly candy. A female Prospero is a start but, the way the rest of the production plays out, it feels more like a gesture than an actual symbol of change.