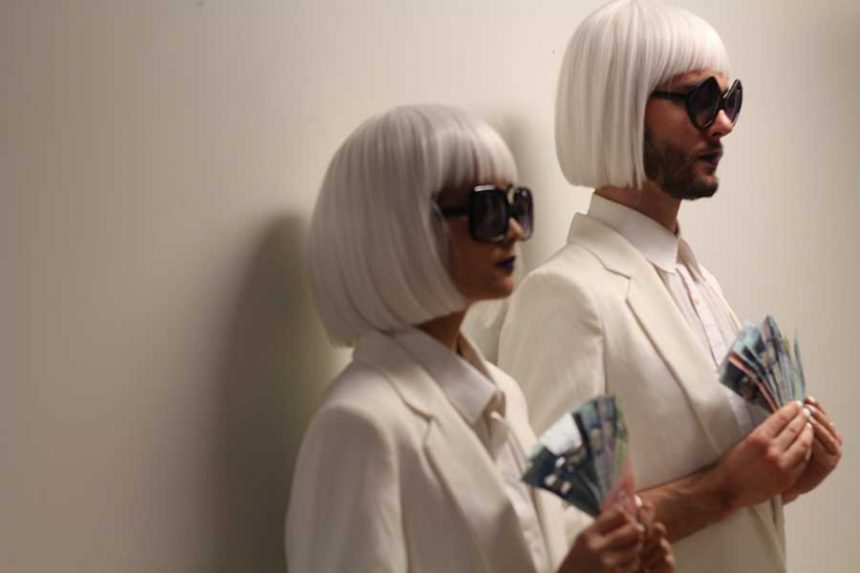 4inXchange (A)
Warning in advance, if you are not into heavy audience participation experiences, 4inXchange may be a bit difficult to handle. Without spoiling too many surprises, performing group xLq have set up a personalized game show experience meant to explore how we think about and value money, from the tactile to the conceptual. The format is also a venue for some fairly probing and personal questions, but to the great credit of the company, they create an engaging, fun, and disarmingly comfortable atmosphere in which to feel capable of honest answers. The experience relies on a measure of coming into it fresh, which makes going in-depth with a review its own sort of challenge. I will say that while I didn’t necessarily come to any revelations in my own thoughts on our place in the financial system in which we struggle to get by, I did come out of the game delighted by the effort to encourage them.

Lion Womxn (A)
One of the things I look forward to at SummerWorks each year are the results of its ongoing partnership with The AMY Project. The showcase provided for young women and non-binary youth to create and perform has a vitality and impact that resonates, uplifts and furthers awareness. Even by those standards, Lion Womxn is a crowning triumph. Through skillful sequences of dance, storytelling and song, the performers share the joys, sorrows, challenges and victories in their efforts to understand and assert their own identities in the face of confusion, bigotry, misogyny and apathy. Particularly moving was the sense of the company as each other’s support and inspiration, individually powerful and fiercely together both.

Winners and Losers (A)
A two woman show entirely dependant on the ability of its performers to convincingly convey a bond of friendship, then completely tear it apart is lucky to have Valerie Planche and Makambe K. Simamba. Their performances are funny and charming when they need to be, biting when they need to be, and raw, honest and uncomfortable when there is no other way they could be. The performance is an initially funny, friendly debate between friends on everything from the value of seemingly random concepts to who is better at any given thing. Yet as discourse continues, cracks form in what may have been just shallow geniality, and eventually shatter into perhaps uncrossable gulfs. Personal narratives emerge and make clear gaps in privilege, prejudice, experience and even generational relevance that, admirably, are given no easy answers, or answers at all. Planche and Simamba do fantastic work adapting Marcus Youssef and James Long’s original play. They create a moving exploration of how women succeed or fail at relating to each other across issues of race, social position, upbringing and personal miseries.

Hot Cuts (B+)
The SummerWorks Lab performances allow audiences a glimpse into works in progress, their own reactions shaping what might later emerge as a finished piece. Director and writer Aurora Stewart Pena noted having just finished her script a few days before the festival at that. But Hot Cuts has a strong sense of itself as a hyper stylized comedy about hair styling in that most stylized of decades, the 80s. The character of a finished piece is there, aided by winning performances and a clearly realized identity in sound, costuming and design choices. The story of struggle for recognition, aspiration to fame, betrayal, rivalry and creative vindication (in hair styling) does take a touch too long to get to where it wants to go, and the ending meanders somewhat. The show is still highly entertaining, worth experiencing both on its own terms and for wondering where some future polish might take it.

Swim Team (B)
Another SummerWorks Lab Performance, Swim Team is a show that benefits as much from sticking around for the post show Q&A on its development as it does the main piece. Swim Team is an allegory for the struggles faced by women in post revolution Iran, told via the imagining of a story of women training to be a swim team who are themselves imagining they have a pool. And that is definitely a lot of layers, right there. Layers which the show doesn’t express as clearly as it could, even with an ending intended to bring them all into focus. Confusion can result. And there is certainly a struggle with the notion of how clearly you can express a metaphor before it loses all meaning. This show’s process seems to be about finding a way to reconcile that struggle without losing its thematic weight. But the audience is encouraged to keep struggling for that meaning through some very powerful performances by women transcending their own narrative to convey through emotion the conflicts of their homeland. It doesn’t exactly lend the piece any easier sense of comprehension, but it does ensure the experience stays with you for your thoughts to turn over.

Stray (B-)
Stray is a rocking session of punk storytelling undermined by its own technical issues (or at least the show I attended was). Tanya Marquardt and her backing band are a definitely talented bunch. Marquardt herself has a full measure of the effortless seeming charisma, force of personality, and edge curving smile that you would want to see in a session billing itself as punk rock. But there were times where I could barely hear her over the music being played. It took me right out of the flow of things, of being able to follow a common thread through the songs and stories. I’m not sure if that was the acoustics of a small theatre space not best intended as a sort of concert venue, or the sound tech, but it was a problem. Near the end, noise from the Theatre Center beyond seemed to intrude as well. I had to fight with the show to enjoy it. While that itself is certainly punk, when the idea is to tell a story, especially as deeply personal a story as Stray is going for, clarity is as important as volume.