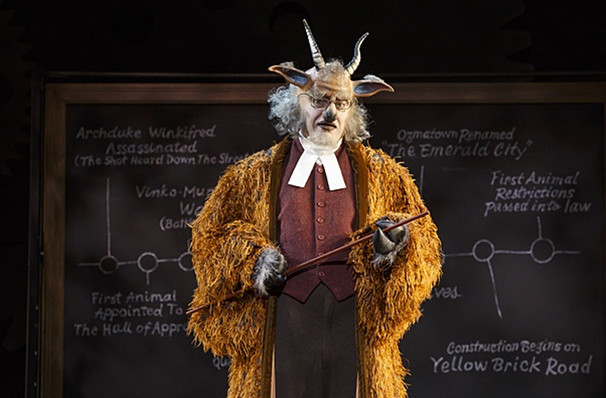 15 years ago, Stephen Schwartz and Winnie Holzman adapted for the stage a novel by Gregory Maguire that was itself an adaptation, or perhaps more accurately a revision, of The Wizard of Oz. The novel was dark and strange and long, full of deeply unlikeable characters and bleak allegorical observations about a world more real than Oz. Still, despite 400 pages of brutal corruption, incredible violence, and sex so graphic it leaves burn marks on your brain, the forrest through the trees of Wicked: The Life and Times of the Wicked Witch of the West is an implicitly empathetic exercise: show me a villain- a notorious villain, a villain so villainous she’s used in elementary school to teach kids the word “villain”- and tell me how she may be, if not necessarily a hero, at least a person.

There’s ultimately little of Wicked: The Life and Times of the Wicked Witch of the West in Wicked the musical save some basic character sketches and an easter egg or two for keen-eared fans of the novel, but Maguire’s contribution is right at the heart of what would become a defining piece of 21st century theatre. His work on a fundamental level challenges the reader to question the story they’ve heard, to imagine the unseen scenes and find room within themselves to believe two things at once.

In the hands of book writer Holzman and composer/lyricist Schwartz, Maguire’s story became at once more digestible and more resonant. Rather than a single-focus character portrait with a large supporting cast, Wicked became a two-star vehicle, a humanizing story every bit as interested in the good witch as the bad. The musical relegates the love story to a subplot to instead focus on a friendship that operates on levels both deeply personal and broadly philosophical. Holzman focuses Maguire’s sprawling political landscape and uses the subjugation of the Animals as the musical’s central political allegory, one of the many elements at play in Wicked that’s grown darker and more impactful since the musical first premiered. It’s a glitzy spectacle of a feel-good musical for those who need that, because sometimes you need that, but it’s as complex and thoughtful and subversive a piece of theatre as any that’s been commercially produced in the new millennium. Wicked has so much to say about the world and the people who populate it- who we are, what we mean to each other, how we treat each other, how we can be better, why we can’t be better- and to underestimate it because it’s also fun would be to miss the point entirely.

Schwartz’s score is dense and challenging, full of homages and leitmotifs that could be analyzed for hours (I once asked Schwartz about the five specific tributes to Wizard of Oz composer Harold Arlen that he’s rumoured to have built into Wicked; he refused to reveal all his secrets and, to this day, I’m only sure of the most famous one: the first seven notes of Elphaba’s ‘Unlimited’ theme are the first seven notes of ‘Over the Rainbow’, albeit re-harmonized and rhythmically very different). Schwartz is arguably more famous for his lyrics than his music (his collaborations with Alan Menken were generation-defining) and there’s plenty of resonance and quotability throughout the Wicked libretto but there are times when the lyrics aren’t even necessary, the music tells you everything you need to know. The unnatural awkwardness of that final ‘I’m Not that Girl’ note tells you maybe she’s singing the wrong song (one of the most hopeful ironies of Wicked is that Elphaba is, in fact, That Girl). The mournful minor key of ‘As Long As You’re Mine’ telegraphs impending tragedy and acknowledges that the temporary happiness of these two people is hurting someone they both love. When the two women sing in harmony, Elphaba often takes the higher notes despite having the naturally lower voice- perhaps a nod to her righteousness, her determination to take the high road, her willingness to do the hard thing; or perhaps because there’s no reason a soprano needs to only sing the high notes when the low ones are also within her grasp.

The female roles that lead the show are two of the most emotionally complex and vocally demanding parts in the musical theatre canon, an especially rare feat when you consider how few musicals are led by (or even feature) one richly drawn female character, let alone two. Glinda, a rare true soprano in a belt-heavy musical landscape, reaches up to a G6 (above high C) but she almost matches Elphaba’s most ridiculous low note in her reprise of ‘I’m Not That Girl’. Elphaba’s final run pre-intermission reaches an F5 at full belt, a magical high-flying moment of musical writing that perfectly illustrates what’s so special about Schwartz’s work. The final notes of ‘Defying Gravity’ soar out through the theatre, evoking a “how is she doing that?!” response to the vocals as Elphaba takes flight for the first time, bringing to a close a first act built around the discovery of self worth and a rejection of rules meant to silence voices that need to be heard.

The technical challenges of both Elphaba and Glinda are so extreme that it limits the casting pool to the best of the best female double threats in the game (while Wayne Cilento’s choreography adds dimension and delight, it’s mostly restricted to the ensemble). In the current touring production, Mary Kate Morrissey and Ginna Claire Mason illustrate this point beautifully. Though Mason’s top notes aren’t as sturdy as they could be, both women thrive within the difficult score and share a really touching chemistry that is the base upon which Wicked stands. Blockbuster musicals live a very long time before they meet a second director, new sit-down productions and tours circling the globe before anyone ever re-blocks a scene or reimagines a costume. So, when it comes to reviewing Wicked in its umpteenth visit to Toronto, it’s all in the minutiae. And the context.

Insightfully, Wicked is written to give each new Elphaba a little playing room to make the role her own, and Morrissey winningly takes full advantage in order to introduce us to someone who feels honestly unique while doing and saying and wearing exactly what hundreds have done and said and worn before her. Her Elphaba is militant and defensive, especially sharp in her act one interactions as she desperately tries to reinforce the walls she’s built up around her deep-running wounds. She’s slower than most to relax her body language in scenes with Glinda and, especially, Fiyero making the eventual emotional payoffs in those relationships that much richer. Perhaps most effectively, she launches insults with the dangerous temporary confidence of someone who thinks they can win the crowd over with humour only to be misunderstood and hated all the more for it. When she dances alone in the Oz Dust Ballroom, you get the feeling this may be the first time she’s danced in her entire life.

Glinda has a few options when it comes to exactly how high she wants to push her highest notes but, for the most part, everyone else stays pretty much put and follows the roadmap set by director Joe Mantello and the legendary Original Broadway Cast.

The weakpoint in the tour is Fiyero, as is sadly often the case. In the 15 years since the character’s creation, a strange gulf has developed between how the role of Fiyero was originally cast and how he’s cast pretty consistently now. Jon Robert Hall has a nice enough tenor voice and terribly impressive biceps, swaggering his way through Fiyero’s fabulous introductory song ‘Dancing Through Life’ with an untouchable air that works fairly well for that song. But just for that song. Though he’s a secondary character, Fiyero’s arc is one of the most dramatic in the show and, in order to sell the transformation, he has to come with some sense that he’s more than what he initially seems. Hall’s Fiyero calls himself “genuinely self-absorbed and deeply shallow” but the actor isn’t able to tap into the underlying insecurity that makes that line more than just a joke. The original Fiyero was Norbert Leo Butz, a performer known first for his depth and emotion then for his voice, never for looking like he should be in a boy band. Broadway’s Fiyero right now was literally in a boy band. He’s the one aspect of Wicked that hasn’t grown more resonant with age and it’s entirely a casting problem.

The show as a whole is more compelling now than it ever was. Listen to the ensemble in ‘No One Mourns the Wicked’ and hear the self-righteous social media mob declaring that those who make mistakes deserve nothing but misery. Listen to ‘The March of The Witch Hunters’ and try not to hear “lock her up”. Think about how Madame Morrible lies from her podium as Press Secretary and how her corruption of language trickles down into common usage (Glinda, Nessarose, and most minor characters use words like “braverism” and “horrendible”, Elphaba never does). Grapple with Boq’s refusal to take “no” for an answer from Glinda, with the campaign launched to discredit Elphaba for speaking out against a powerful man, with the hateful slur scrawled across Doctor Dillamond’s chalkboard. The politics of Wicked, as written first in 1995 then in 2003, tell the story of a mediocre man who takes advantage of an impoverished population who “needed someone to believe in”. It’s the story of how power is harnessed by directing hate at the powerless, by silencing oppositional voices, by promoting yes-men, by putting minorities in cages.

Early on in Wicked, Elphaba hears of a problem and responds “Someone’s got to tell the Wizard; that’s why we have a Wizard”. But the Wizard isn’t real. He never was. In 2018, that means something different than it did in 2003, but the rest remains the same: question what you think you know; the witch might be the hero, or at least not the villain.