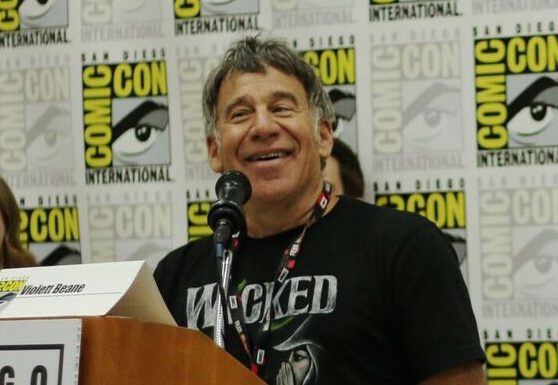 I don’t get star-struck easily, especially at Comic-Con where the press area averages at least one major celebrity per 5 foot radius. I was only a reasonable amount of embarrassed when Tom Felton mocked the volume of my sneezes, I didn’t flinch when Rami Malek stared into my eyes for two straight minutes without blinking, my West Wing-loving heart even handled last year’s Rob Lowe interview without going into cardiac arrest. But I freaked out when I walked into CW3PR’s Behind the Music press room and saw their unannounced special guest, there to announce the start of work on a certain long-awaited, much-anticipated movie musical.

Stephen Schwartz is literally my favourite composer alive. Sometimes I think he’s my favourite composer ever (sorry, Verdi) or my favourite living writer of any genre (sorry, Sorkin). My practiced professional composure was so far out the window the second I saw the Oscar-winning man behind Wicked, Children of Eden, Godspell, Pippin, Working, Pocahontas, Enchanted, The Prince of Egypt, The Hunchback of Notre Dame and so many more that I don’t see the point in trying to play it cool here. Stephen Schwartz is the best and sitting down with him one-on-one was easily the highlight of my Comic-Con. I asked him what he’s looking for when casting the leads of the upcoming Wicked movie, what are some of his greatest inspirations, whether Children of Eden will ever make it to Broadway (we both agree it has to star Jeremy Jordan if it does) , and what are some of the secrets buried in his most famous score that fans are still discovering. He very kindly didn’t laugh at my total fangirl meltdown.

My Theatre Award Nominee: Jennifer Dzialoszynski
Game of Thrones: “Beyond the Wall” and Beyond the D&D Monster Manual
Nominee Interview Series: Wade Bogert-O'Brien