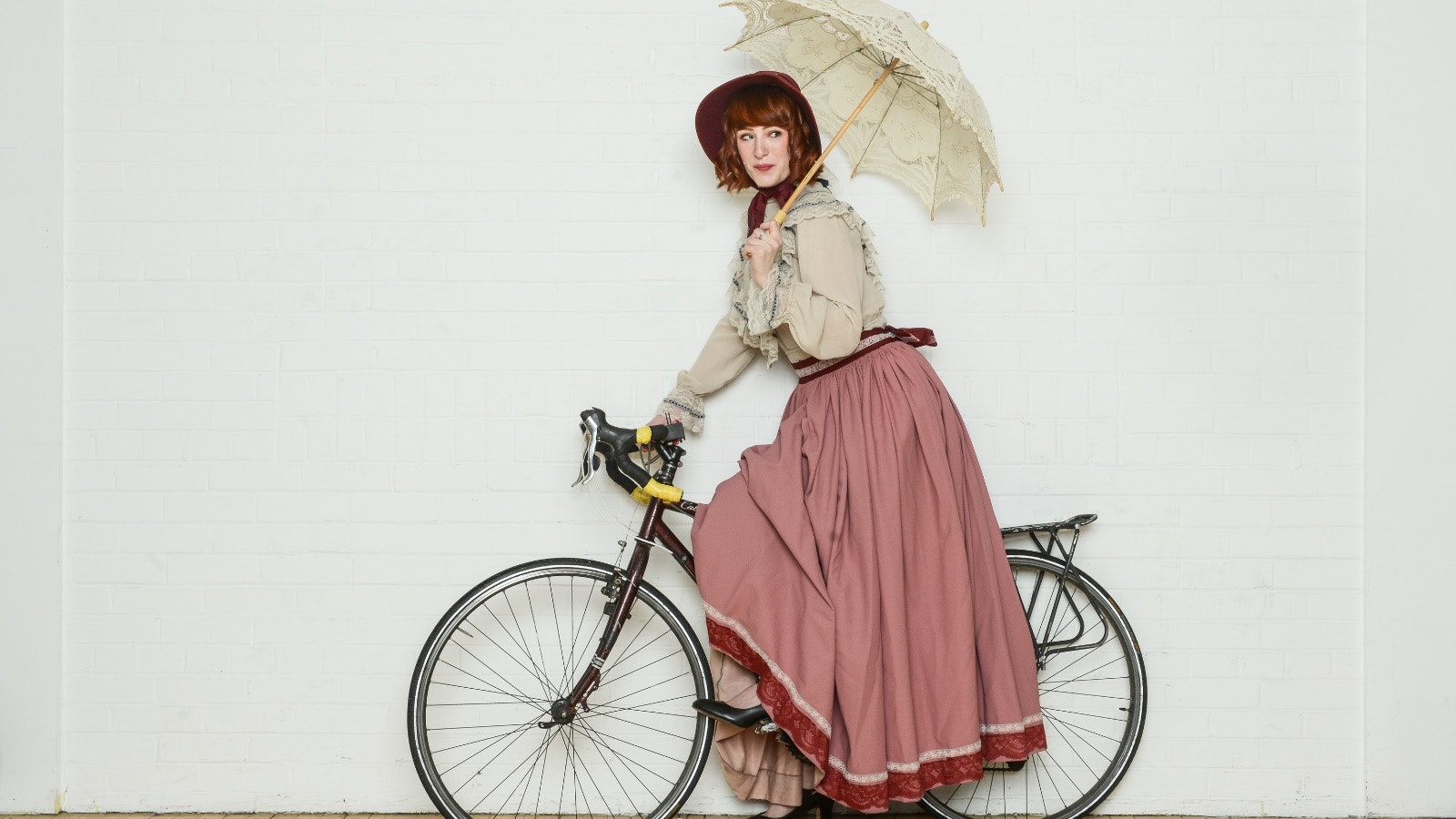 BikeFace (A)
BikeFace is as if Kate Beaton’s Velocipedestrienne comic came to glorious life. BikeFace is more specifically the theatrical realization of writer Natalie Frijia’s real life journeys across Canada on her bicycle. Performer Clare Blackwood imbues the one woman sequences with the restless yearning and drive suited to the best of adventurers. The audience is taken on a cross country road trip that doesn’t skimp on winning humour, but also deftly weaves in local vignettes and diverse characters with an overall personal narrative. More importantly, the show doesn’t shy away from the uglier challenges a woman living any life on her own terms, adventurous or otherwise, has placed in her path by others. Blackwood’s range as a performer doesn’t just showcase oddball characters encountered along the way, but the inner strength to deal with doubt, fear and imposed limitations.

Always Unique, Totally Interesting, Sometimes Mysterious (A)
Alyson Parovel’s one woman show deserves to be a festival hit, for all that its experience is not an easy one. In fact, it deserves to be a hit because its experience is not an easy one. The show depicts the lives and pressures of Chloe, a girl with autism, and Olivia, her neurotypical twin that struggles to support her. The show is unflinching in its honesty and humanity, exploring humour, suffering, shame and hope in equal measures. Both girls are fully realized and validated as people through a powerful and sometimes devastatingly genuine performance. Parovel imparts the audience with a depth of understanding and empathy that reflects the years she has spent refining this play through consultations with people who work with children on the spectrum, including her mother. My only critique is one born of personal experience. While not on the autism spectrum myself, I do have a neurological/psychological disability that expresses itself via tremors. Like Chloe, I have my techniques to try and calm or mitigate my worse moments. So when the play opens and closes with “Fix You”, from Coldplay, and has Chloe at one point express a metaphor about her hidden potential by comparing herself to something to be recycled, I feel a bit struck where I live. I don’t want to feel boxed in as someone that needs to be fixed or be remade by someone else to be better than I am, yet that’s the feeling I am left with. I don’t imagine for a moment that such notions are Parovel’s intent, but the best testament to a play with this much honesty of sentiment is to respond with the same.

Six Stories Told At Night (B+)
Six Stories is a show about storytelling itself, about French Canadian Folklore, about friendships so deep and painfully felt as to be indistinguishable from the bonds of family, about fairy tales, the real world, and the otherworld. Adapted from a podcast, the play flows between real world experiences, a more magical realism, and outright epic. The depth and resonance created by the atmospheric quality of the show’s performers draw the audience into constantly shifting layers of narrative, as if being drawn in and out of the otherworld. The folding paths through which the play presents itself are prevented from getting too murky or confusing through the anchor of the intensely realized, warts and all friendship portrayed by the leads, Blythe Haynes and Alexandra Milne. The heart of an almost delicately intricate, multi-narrative sequence remains throughout the emotional ties between two young women that pull together, push apart, yet hold enough strength to guide them and the audience through a circling journey.

Carmilla (B-)
The idea of adapting an old gothic classic through burlesque felt like it had potential to be a festival standout, and I was curious how director Kay Brattan would get around some of the novel’s flaws. Unfortunately the non-burlesque parts of the show are instead weighed down by that inherited baggage. I know, I know. “You went to a burlesque show for the plot?” To the credit of the cast and choreographer, when the material manages to finally get out of their way, the performers put on a truly spectacular burlesque show. Sequences are hilarious, sexy, high energy and a quality showcase for the range and talent of the performers. Without too many spoilers, there’s even a super homoerotic reinterpretation of a certain Disney movie sequence mixed into the adaptation that the audience both needed and deserved in response to a more half-assed, live action film of recent memory. I just wish Carmilla’s more entertaining parts managed to be set in a framework that didn’t let them down as much. The show itself definitely cares a great deal about using its plot to deliver a message on love and acceptance, which makes even it more disappointing when the experience falls down for that choice. Carmilla is originally an extended work of narration from its setup. That sadly translates into stretches of the show doing a bunch of telling and not showing via straight up narration, right down to providing a moral of the story speech that didn’t put a lot of trust in its audience to sort things out. An attempt at a 19th century feel makes for some dialogue coming off as stiffly delivered. The original author’s desire for mystery and obfuscation here just makes for some plot elements that go nowhere or at least seem to never be fully realized. As a burlesque, Carmilla is fantastic. As anything else, not so much. Note to Carmilla the novel fans forming a genre appropriate pitchfork and torch wielding mob for my suggesting the book is flawed; if we end up in some kind of erotic dance fight over it, my end of that will just be terrible and embarrassing.

Lighters in the Air (D)
Twee hipster artists bemoan their life choices and wasted potential through song, for 90 minutes. And despite 90 minutes for basically a 2010s Reality Bites: This Time They’re All Musicians, the entire affair felt so underdeveloped (having now knocked Carmilla the novel and Reality Bites, I’m probably going to be ripped apart by an angry horde of Goths and Gen Xers before Fringe is over). Characters were poorly fleshed out, initial main plots confusingly became barely realized subplots, major developments came out of nowhere, with no grounding. Twee Male Hipster Musician #1’s infidelity was somehow scandalously amusing to Twee Male Hipster Musician #2’s infidelity being tragic and wrong (then again at least it made them less interchangeable). Technical problems also mounted alongside narrative ones. The backing band sometimes drowned out the main performers, and the use of an entire bar as a site specific venue made for a lot of around the room neck craning to see things other than a performer’s back, or the pillar they stood behind. As a musical showcase of highly talented singers, Lighters would have been fine. But it also wanted to tell a story alongside its songs, yet never managed to figure out how to split the difference.