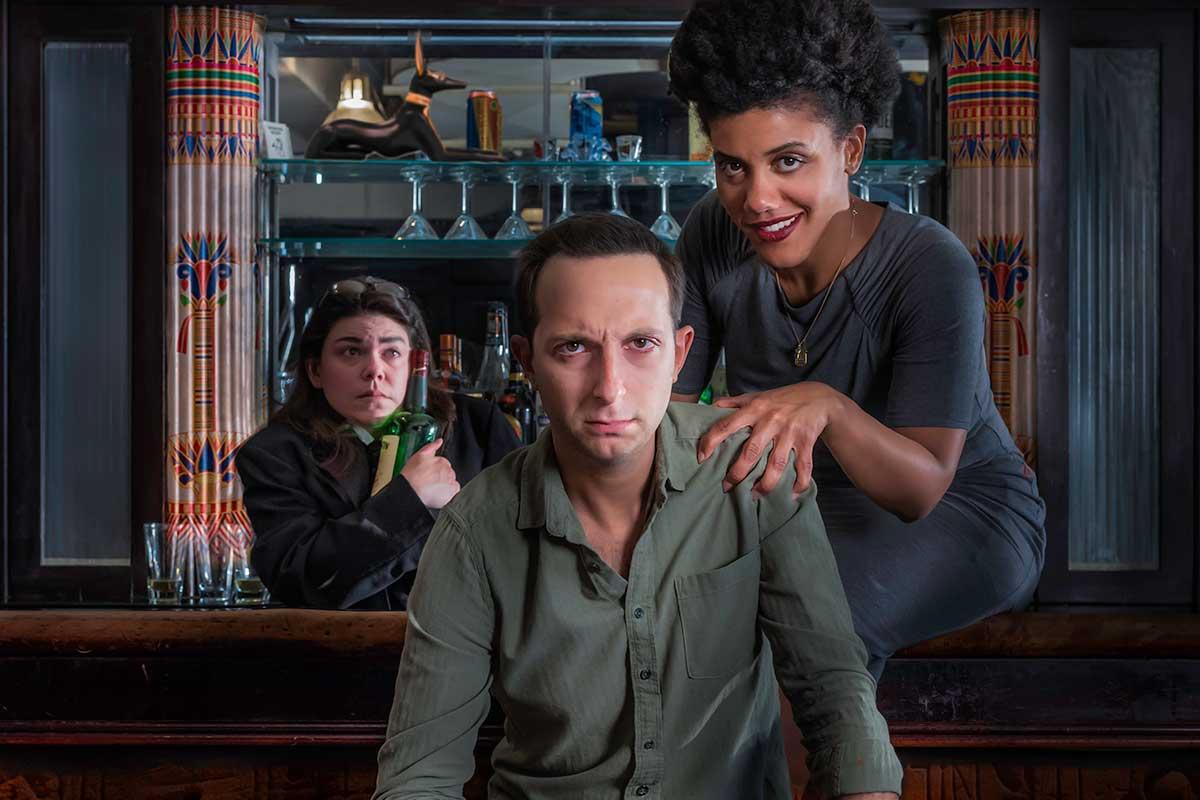 Featherweight (A)
Tom McGee has been delighting audiences for a while now as the man behind the Shakey Shake puppet theatre adaptations of Shakespeare for kids. As writer and director of Featherweight he’s trying his hand at more adult, live action fare, but fortunately without losing his sense of humour or the fantastical. The idea of the absolute, black and white Egyptian tests of the afterlife inflicted on a grey and murky modern world is a clever one, and executed brilliantly. The show has a deft hand for the surreal humour and tragedies of its setup, as a mystical dip into the browser history of the departed explores the toxic effects of internet anonymity on morality. Featherweight ultimately challenges the idea of judgement itself, and how well any of us can fit into good or evil boxes. Special praise goes out to Kat Letwin for bringing multiple characters to vivid life in a single performance, as a god channeling multiple important figures from the life of the departed. I have even more praise for the entire production for actually making effective use of their site specific surroundings both for relevance to the show and being able to actually see anything. They near single-handedly rescued the entire idea (I reserve the right to change my mind again the next site specific show I spend watching people’s backs for 90% of it).

Wounds to the Face (B-)
It is ambitious as hell for a group of third year Randolph College students to take on material from Howard Barker, a notoriously, intentionally difficult modern playwright. It would be ambitious for a company of seasoned actors to make the attempt, frankly. The choice to stage Wounds deserves considerable respect. Unfortunately I can’t say that it’s a choice that always works out. Barker’s dialogue is dense, poetic, anti-modern, and seeking to force the audience to have to struggle for the meaning they take from it. Sometimes this makes for the actors themselves struggling to convey a sense of meaning or even emotion from the material for the audience as they work within an intentionally off putting framework. Barker’s exploration of the meaning and perception of beauty, depicted through a series of vignettes, is as far from a safe choice for a show as could be made, while still offering an audience a comprehensible outline through which to be challenged. For anyone looking for something outside typical festival fare, Wounds is an excellent choice, just not one without problems.

Cluster Fucked (C)
Cluster Fucked is basically a university lecture period where the professor has tried to spice things up with some skits and some music. Alternatively, it’s a TED talk trying to hold the attention of its audience through some semi enforced razzmatazz. It’s not that it isn’t important to talk about how data is being collected on us from basically all our electronic activities, how companies process it, and how they then manipulate us by it. That’s incredibly important to talk about, especially in the manipulated election age. If nothing else, Cluster Fucked definitely knows what it is talking about and why you should listen to what it has to say. But this feels like a play created by an academic, to deliver an academic lecture, and in fact, it more or less is (David John Phillips, the producer, creator and director is an Associate Professor Emeritus of Information at U of T).

The Ding Dong Girls (C)
The Ding Dong Girls would be entertaining as a sort of drag show cabaret. One of the numbers goes on just shy of becoming interminable, but the energy, vivacity and humour otherwise carry through. Unfortunately the show seems to remember at the last minute that it wanted to tell some sort of story about the 90s drag scene in Toronto and tries to achieve this via a last minute swerve towards Seriousness ™. The shift feels completely out of place with everything that happened before, and everything that happens after it does, with performances carrying on like barely anything grim happened at all. It’s hard not to feel like the show derailed pretty sharply, and never really recovered from doing so.

Boy Wonders (C)
Satire of a genre tends to come out of two places. It can come out of love of the genre, where the satire pokes at the foibles you can’t help but observe over the years from within a depth of fandom. Or it can come out of disdain for the genre and an intent to mark out all the stupid, ludicrous things you can’t believe people haven’t noticed. Boy Wonders has a sense of coming closer to that second take. Depending on your affinity (or lack) for superheroes, you’ll either be really pleased by that, or you’ll find yourself a bit irked that the characters and situations it develops to take its shots are specifically contrived to let those shots be taken. It’s a bit hard to feel like any real points of satire are being made when the deck is being stacked to make them, to put it another way. Superheroes treat their sidekicks abusively, says Boy Wonders, and also the concept of the sidekick is abusive and ridiculous. This is a pretty easy idea to come up with for a play otherwise touted as touching Watchmen scale deconstruction. A notable saving grace is the choice to cast all those sidekicks (with a single, intentional exception) with actual teenagers. The cast as a result do a great job infusing their roles with all the emotional peaks and valleys and struggles for a sense of identity that come with that time of life.

One Left Hour (F)
There is certainly something sort of brave about putting on a hyper avant-garde performance that is so aggressively indifferent to the idea of being understood, enjoyed or even being found as basically coherent by its audience, that the atmosphere borders on contempt for said audience. If I call this play a barrage of nonsense, I’m pretty sure the company (reigning Critics’ Pick Award Outstanding Production winners Good Old Neon) would be proud to hear that; so, you’re welcome guys! (Feel free to also quote “the atmosphere borders on contempt for said audience”, that’s why it’s there) Here, though, is my counter argument to its mission statement of art and paradox: Tickets to a Fringe show are 13 dollars. Not everyone gets media comp tickets like me. One hundred percent of the proceeds for the shows go back to the artists or so they say. It’s okay to acknowledge that on some level you’re being paid to engage your audience, it won’t compromise your soul.