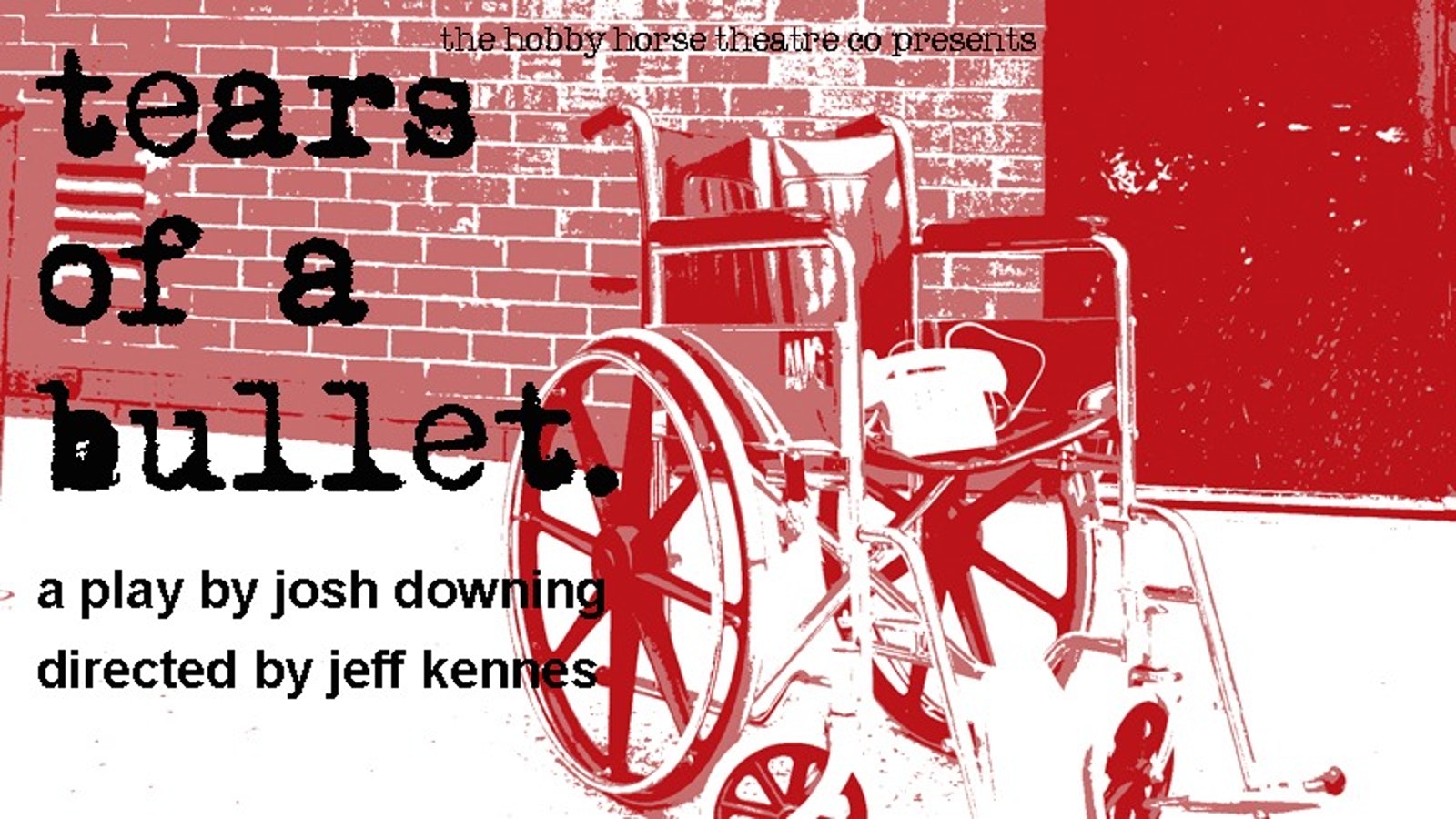 Tears of a Bullet (A-)
You don’t have to know anything about sci-fi writer Thomas Disch who inspired the subject matter, to appreciate this strongly written play by Josh Downing, effectively directed by Jeff Kennes. The feat of this show is the convincing delivery from each member of the cast. Their objectives and tactics are crystal clear. Jim (Stephen Flett) will stop at very little, using his words and knowledge to psychologically torment the superintendent and his wife who want nothing but to see him evicted and out of their lives. Superintendent Danny (Adrian Leckie) succeeds in playing the – according to Jim – “almost too nice” blue-collar guy, nonetheless perfectly revealing with good timing his compassion which extends beyond what might be expected of someone with rural Christian roots. The eventual “shut up” he directs towards his wife certainly shocks us. Similarly Danny’s wife Louise (Chantel McDonald) starts off bossy and determined to do only what the good Lord instructs her family, only to soften as she learns the possible fate of her brother Charlie, and questions the reach of her Christian values. All in all, their timing is perfect. The play also deals with mental health, but in a roundabout way. Jim talks to himself on the phone, believing his late partner to be on the line. While he clearly is not coping well with loss, I found it hard to sympathize in the moment. The last reason this play does not get an A from me is because it ends abruptly. I wanted to learn more about Jim’s motivations for keeping news about Charlie from Louise. I wanted to see how these characters would grow. Perhaps, I will have to wait for another version or Act 2.

her. (B+)
Deborah Shaw’s performance as Ilsa is gripping. The slow reveal throughout this carefully written story leads up to the major twist near the end. You don’t see it coming at all. I can’t remember witnessing such high stakes in a solo show before. Shaw is meticulous, paying exquisite attention to each and every detail on the simple, yet effective set. We really believe ourselves to be having coffee in 1950s Toronto, entertained alongside Ilsa’s friend Helga. Ilsa is a German expat who, clearly, knows every last thing about baking. The suspension of disbelief as she communicates with Ilsa and her nephew Gunter whom we cannot see, though they are a part of every single beat in the plot and not simply characters she conjures up spontaneously, is a rarity on stage. Shaw along with her director (David Argo) have certainly done a lot of hard work in staging and tracking their each and every movement throughout this extremely text heavy piece. At times the delivery is too slow, and at times it seems too quick. For example, words were often repeated, which I first thought were mistakes, but later realized were German words that Ilsa lets slip in her speech and translates for Gunter’s sake. While carefully acted, I do become disengaged halfway through, because there are no new characters or themes, and the subjects of baking and the war become redundant. The music (Beverly Lewis), most appropriately, sets the tone and compliments the transitions, and assuming them to be original compositions helped tie the elegantly dressed set and performer together neatly like a bow.

Crave (B)
Sarah Kane’s play is void of reference to space and time. The four characters represent four aspects of the human psyche. Each of the performers (Wayne Burns, Liz Der, Breanna Maloney, and Laura Meadows) takes us through the extreme highs and lows of human experience. Themes include rape, abuse, eating disorders, suicide, and mental illness in general. Der is particularly emotive and so invested in her character’s vulnerability that we almost always witness her in tears – or on the verge of – and this deeply moves the audience. Burns is able to command the space by transforming fluidly from big to small, with his body just as well as his voice. Maloney’s physical gestures and movement clearly communicate the woes of a psychologically tortured soul. Meadows’ carefully articulated words demonstrate the dichotomy between pleasure and pain. I am a huge fan of non-traditional contemporary text and staging, and was very curious to see how the poetic language intrinsic to Kane would play out. I studied Kane back in university and had only ever seen excerpts so I was excited at the chance to see a full-length production. As a whole, though, I found the stream of consciousness flowed at such lightning speed that I could not keep up with what was being said let alone imagine what the stories emerging from their subconscious might be revealing. While the content is impactful, the repetition in the text can lead to disengagement early on in the piece.