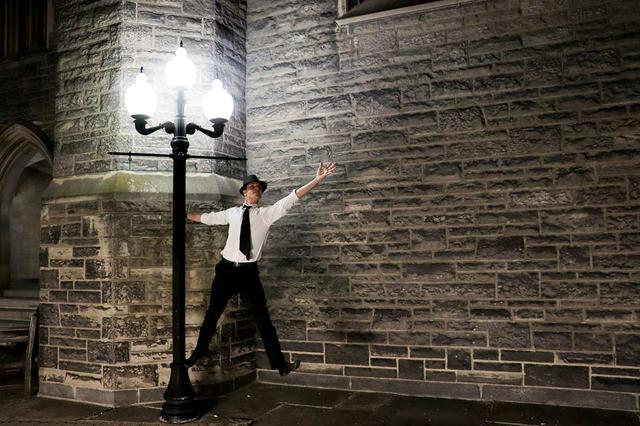 Anatomy of a Dancer (A-)
Breakaway Entertainment are putting on an exuberant song and dance show about the life of Gene Kelly, careening through eleven pieces in under an hour that show off its talented troupe of young dancers. Robbie Fenton and Maddison Hayes-Crook, costumed by Kate Knox like the rest of the cast in mid-century American dress, frame the show as our narrators, taking us through the highlights of Kelly’s career as the rest of the cast dances out corresponding scenarios. Highlights include a high-octane ensemble piece set to Benny Goodman’s ever-reliable “Sing, Sing, Sing”, and a gorgeous pas de deux danced by Micah Enzlin and Alayna Kellet and set to Irving Berlin’s “Cheek to Cheek”. Another standout was Charlie Chaplin’s “Smile”, danced wonderfully by Stéphanie Visconti in an evocation of Judy Garland’s life. But, aside from a few early pieces that ended rather abruptly and didn’t seem quite as well aligned with the chosen music as they could have been, almost every piece is strong, and the show seems to increase in energy and chutzpah as it goes on, climaxing with an ecstatic and endless finale set to George Gershwin’s “I’ve Got Rhythm”. Director and choreographer Adam Martino keeps the thematic focus nicely on Kelly without overindulging the expected stuff (“Singing in the Rain” is only a part of a larger medley), and he and co-choreographer Leah Cameron keep the onstage movement fluid and electric, even when the space is packed with every performer. Fenton and Hayes-Crook both do a good job crooning some classics, and they get in on the dancing as well. The rest of the cast, which includes Ashley Harju, Jacqueline Dos Santos, Matthew Eldracher, Rohan Dhupar and Sam Black, are stellar. Extra points for everyone bowing within the final dance, and then firmly exiting the stage for good when the audience was at its most enthused.

Meg MacKay: Freelance Witch (B+)
As she admits right off the bat, there’s only one actual witch joke in Meg MacKay’s solo show. But it reflects the tone of her show, funny, absurd, and, in its way, enigmatic. MacKay takes us through the outline of her early life growing up in Prince Edward Island, touching on her Native ancestry on her mother’s side and her dad’s not-quite-explained affiliation with the Hell’s Angels on his side. From a summer in Québec where she realized she was queer, to making her way to Toronto, we are given a full range of experiences which are hilariously, thoughtfully described by MacKay. The main framework of the show bounces between the months she recently spent in Oman cat-sitting (how did this come about?), and the description of an abusive relationship from which she had just emerged. MacKay and director Chanty Marostica nicely balance the humour with the exploration of this darker, more difficult territory, but there’s a sketchiness to the overall substance of the narrative that leaves the show feeling a touch incomplete. It is obviously not incumbent on MacKay to reveal more than she wants to, and there’s no obligation for a show like this to offer full narrative closure to the issues it raises, especially when it’s clear that her experiences are still something she’s working through herself. The show ends on a lovely, ambiguous image, a strong final beat that made me wish for a bit more coherence at the show’s core. None of this takes away from the fact that MacKay is a naturally funny, charismatic performer, someone whose onstage ease and quick wit makes you just sit back and enjoy watching her do her thing. With a really well developed piece she would absolutely shine; here she shows that she’s got a lot to show, and she provides us with a solid hour of humour and thought.

How Hard Could THAT Be? (B)
Trent Arterberry has had a long and varied career as a mime working in the U.S. (and now living in B.C.), and in this light, pleasant autobiographical show he takes us through the major moments of his life that took him to where he is now. We begin with his literal birth, follow him as an adrift adolescent trying to settle on what to do, and onwards through his often fulfilling, sometimes disappointing, career. Along the way we learn about his stint opening for artists like the Kinks in the 70s and 80s, and a brief brush with SNL has its own bittersweet excitement. Arterberry, whose Willem Dafoe-like face and assured physicality give him a striking presence, is an obvious professional, committed to his audience and his art. The show, even for a mime show, is a touch low-key, and feels a little tonally old-fashioned, earnest without being quite as insightful as one might like. Ultimately however it doesn’t feel like Arterberry is here to give us the nitty-gritty on his life, but rather the version that corresponds to the art of mime itself – light, but passionately done.

The Two of Us (B)
The Mainspace at Theatre Passe Muraille is fully used in this well-acted show about friendship, family, and trauma. Set soon after the end of the Yugoslav Wars (the program offers a primer on the conflict, almost too detailed for its ultimate relevance to the show but appreciated nonetheless),Tena Stivicic’s play follows two friends, Lena (Beatriz Yuste) and Anja (Shannon Currie) as they party, hang out, and negotiate various crises. When Anya confesses to Lena that she has been seeing Lena’s father Emil (a wry John Blackwood), a famous intellectual who occasionally appears literally above the two women giving his thoughts on war, culture, and memory, the expected blowout doesn’t happen. Instead, it becomes a slow-burn of a conflict between the two friends, leading to a darkly funny climax. Both leads are strong in their roles, with Currie bringing an entertaining, quasi-aristocratic edge to Lena’s burgeoning mid-life crises and bohemian affectations, and Yuste balancing Anja’s anxiousness with moments of real warmth. Deborah Grover also does amusing work as Lena’s painter mother, who like her father makes occasional appearances on the opposite end of the theatre’s higher level, pestering her daughter with endless judgemental phone calls. The play itself, originally performed in Belgrade in 2003 and translated into English by director Svjetlana Jaklenec, as well as Daniela Saioni and Yuste, is intriguing and has an enjoyable relationship at its core, but it is also unnecessarily long and often seems a little adrift. Jaklenec does a nice job of directing the actors and has a strong sense of how to open and close the show, but the energy definitely slackens in the middle. Kudos to Christine Urquhart for her detailed set design, the bulk of which is made up by Lena’s packed apartment, and also to lighting designer Imogen Wilson, who frames the show with a funny image highlighting the two women’s feet, mirrored moments of vulnerability and isolation that highlight just how much the friends rely on one another.