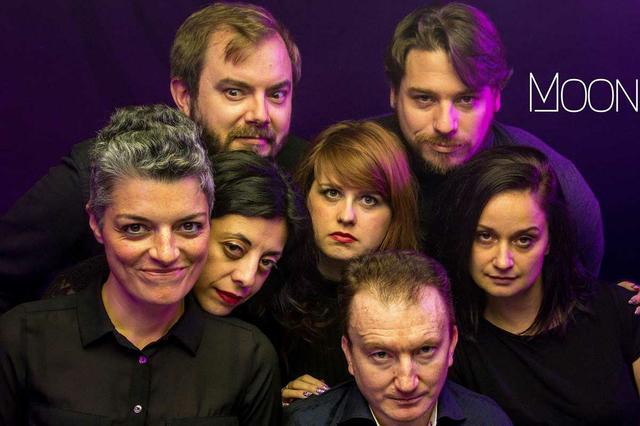 Moonstruck (A-)
When an improv show is good, there’s really only so much you can really say in attempting to give it a review. The improvisers of Moonstruck (created by Sarah Hillier and Paloma Nuñez) are putting on an ecstatic, high-energy hour that ensures you’re in good hands right from the top. The concept is simple but nicely evocative: take an audience member’s dream and out of it attempt to forge a story. There are predictably a few dead end subplots, and the performers seemed to have trouble keeping the main facets of the dream present in the story they came up with, but who cares when the result is so funny and so exciting to watch? The whole cast on the night I saw it were fabulous, with special mention to Ken Hall and Rob Baker for managing to keep an especially irrelevant, running subplot about rivalrous, wary campers so bizarrely funny. But all of them, who on the night I saw it included Jess Bryson, co-creator Hillier, Andy Hull, and Sean Tabares, do excellent work. Special mention also to Mark Andrada, the stage manager who produced the Jurassic Park score seconds after the a character found herself abruptly entering the park itself. This is a solid, fun bet for your Fringe viewing – you’ll want to ignore Cher’s advice in the movie with the same name and never snap out of it! I’m tired.

Mrs. Mama’s House (B+)
Deep within the bowels of the Bata Shoe Museum lie three large boxes and a mess of scattered shoes. At the beginning of each day, Mrs. Mama (Natalie Semotiuk) slowly descends from the above floor and rings a piercing bell, alerting a trio of workers (Blake Murray, Kenneth Norfield and Zenia Sethna), who each sleep in one of the three boxes, to wake up, jump out of their abodes and start polishing shoes. Writer Nathaniel Kinghan and director Autumn Smith have crafted an eerie, effecting work that uses verse and the fabulous ambience of the Bata Shoe Museum basement to heighten the production’s gothic energy (and amusingly suggest that this drama of power and shoe labour is what occurs in the museum when it shuts down every night). Kinghan’s text seems inspired at times by Beckett, both in its repeated banalities as a means of trying to achieve a mutually recognizable reality, and in its uncovering of brutal dynamics existing within a simultaneously surreal and unthreatening context. This gives the play an evocative tone that keeps you engaged, though at times the staging is a touch static, particularly when the workers spend a good chunk of time behind their boxes conspiring to try on a shoe or two, and the seventh or eighth time Mama slowly descends from on high to check on her charges. For the most part however this is a compelling and well-executed drama, with strong, thought-through performances. The actors are all very engaging, and each achieves moments of real intensity, with Semotiuk puling off a surprisingly compelling arc and pulling off the end of the show with real aplomb. The Bata setting works nicely not just for its obvious thematic appropriateness, but because the many reflective walls of the basement area atmospherically expand the relatively small space within which the actors are working. An intriguing and enigmatic work.

The History of Beer (B)
It cannot be said that performers William Glenn and Trish Parry fail to deliver on the promise of their title. Dressed in original series Star Trek-like regalia, with filled beer glasses as their insignia, the comedy pair inform the audience (some of whom, depending on how late the show is performed have been able to purchase a glass of beer beforehand to lubricate their viewing) of a shift in the time-space continuum that has resulted in beer becoming . . . less accessible? I admit to not grasping the main incentive for the time-travel plot that followed. In any case, in order to get us back into the correct, beer-abundant timeline, Glenn and Parry take us back to the very beginning of the drink’s history. Starting 10 000 years and taking us to the mass conglomerate of beer companies today, we are given a genuinely informative look back at the beverage’s storied past. Both actors have an endearing energy and a nice chemistry, though the show itself feels somewhat haphazard (in their defense, the performance I saw began at 11 PM and featured far more beer-less audience members than is probably normal). The show wants to be both informative and funny, and while it is usually one or the other, it never quite strikes a balance between the two. Still, it has a nice hang-out vibe to it and features some enthused, endearing performers at its center.

The Truth* (B)
A fully committed troupe of performers from the clown company A Muse Zoo help this show emerge from a shaky start into something that, while not always consistently funny, is frequently enjoyable in its commitment to total absurdity. A masked, absent-minded professor played by Mikey Hays (who like everyone plays a slew of roles), starts us off by introducing a lecture on the leadership history of the mythical Kundinanbanbom (or, something close to that), and eventually we are shown the history of four other would-be rulers, all of whom eventually converge in a battle to take over the kingdom. Their backstories, which range from an underground family drama to a re-telling of Hamlet if Hamlet were a ponderous, lazy frattish dude (not much of a stretch!) are imaginative and amusingly performed, though not always totally compelling. Indeed the show, like every eighty to ninety minute show I’ve seen at the Fringe so far this year, is unnecessarily long, and could do everything it does and probably better in under sixty minutes. Still, the performers, who aside from Hays include Michael Dias, Kenzie Bizon, Sarah Brizek and Alice Glass are inventive and a lot of fun to watch – special mention for Bizon, who depicts a lascivious French judge, a dying child of the underground, and the aforementioned Hamlet bro with a distinct but hilarious deadpan approach. The following is a sentence I never expected to write: let’s hope this Ashland-based clown troupe makes another trip North to Toronto!

We’ll Be Better Tomorrow (B)
Jason DeRosse and Stacey McGunnigle play well of of each other in this fun, breezy sketch show. They start with a self-deprecating ode to body confidence, setting the tone for the following forty-five minutes, which mostly depicts characters trying to bridge the gap between social progressive ideals they aim to strive for and their own haphazard attempts to actually apply those values to their everyday lives. A couple convinces themselves that they want to swing with their friends; a mother harangues the audience for not being understanding of her daughter’s first period (causing the daughter greater embarrassment than any other possible reaction); a deeply insecure male employee tries to needlessly target a female colleague while attempting to present a guise of inclusiveness. The premises are not revolutionary, and a few failed to really gain steam the afternoon I saw them, but for the most part DeRosse and McGunnigle are a lot of fun, easily bouncing off one another, keeping the momentum going, and ensuring the audience stays laughing.