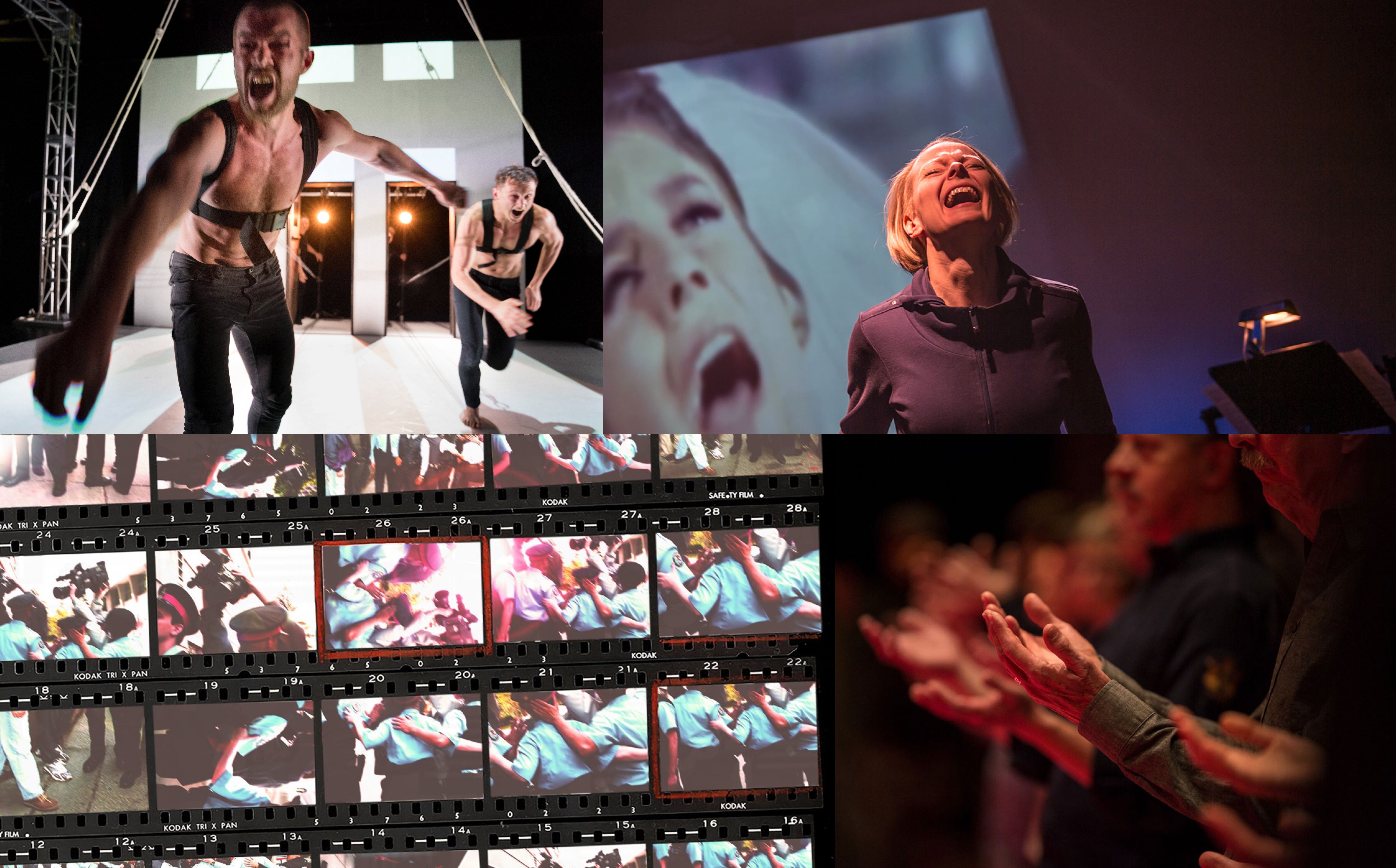 A Square’s Journey through Luminato 2018

A theme you will find in my reviews of Luminato shows is that I tend to feel like the festival is not really for me. I have fairly conventional theatre taste and fairly passive political beliefs (at least among the liberal consensus of my community) so Luminato’s artsy, brazen, avant-garde vibe is really just not my thing. Though I recognize the importance of art of this nature and am grateful for its boundary pushing once the effects trickle down into my preferred mainstream fare, I mostly find it annoying.

Take, for example, Tables Turned, a modern multimedia experiment from Tapestry Opera that plays with classic films and a fan’s relationship to that which she idolizes, looping snippets of footage (mostly Sound of Music, tbh) as a soprano mimics the odd sounds with her own complementary wails. Carla Huhtanen is a brilliant performer, her voice powerful and perfectly controlled and her emotional performance grounded and dedicated. Tables Turned felt, nevertheless, interminable. It was the sort of outside-the-box work that is surely someone else’s favourite thing in the entire world but, to me, it was painfully boring and irredeemably alienating in its determined dissonance.

Belarus Free Theatre’s Burning Doors presented a similar but different problem for me. While the reductive grump in me really wanted to call Tables Turned stupid, Burning Doors is definitely not that. It’s protest theatre- banned in the company’s hometown of Minsk- well thought-out, well rehearsed, and inarguably super important (it’s about the cruel imprisonment of Russian and Ukrainian artists and the suppression of protest). But I just kind of hated it. I know “liking it” was not the point, but the horrors in Burning Doors’ story are easily understood by simply reading the pre-show projections, what follows is bludgeoning of the point. It’s stylish and hard-edged and in Russian, We don’t spend nearly enough time with any one character and, though many of the scenes are about eight times longer than they need be, nothing is given the space to breathe let alone haunt. There are lots of moments of big showy impact in Burning Doors but on an emotional level it never grows much beyond the outrage you really ought to feel already.

But, while I feel like most of the festival is plain old not for me, I suspect The Fever was purposefully made for the me’s of the Luminato crowd. I despise audience participation, partly because it fills my back-row-dwelling heart with exposure-related fear and partly because I’m just really not a joiner (I quit all team sports by age 13, I’m impervious to peer pressure, for crying out loud I tried out every job in theatre and decided the only one I liked was “audience member”). 600 Highwaymen’s exercise in collective storytelling acts like a challenge to the many people who feel similarly skeptical about theatrical interaction. You cannot not get involved, no matter how little eye contact you make with the artists or how hard you pray “please just leave me be”. When the performance begins, you don’t know who the cast is or even how many of them there are. They emerge gradually from the crowd of participants, each new introduction representing an increasingly marginalized group (an older man, a young black man, a transgender person). An audience of bystanders is forced to examine whom they’re compelled to stand up for and whom they’re willing to stand beside. For me, it started out as a deeply self-centered exercise- I was reminding myself to breathe, sometimes trying not to cry from stress, focusing fanatically on individual instructions so my brain didn’t have room to think “why are you doing this?”. I like to think that most of the room was on that journey with me, our heartbeats collectively raised out of strange irrational fear as we moved from self-conscious inhibition to a place of communal release. The breakthrough at my performance came when an actor asked “the strongest person in the room” to stand up and help him. All the other requests had been simply for “someone” and eventually they would ask for “the youngest”, a quantifiable identifier that could be determined by an educated guess. But “strongest” made everyone freeze. We were so determined to do everything right, we were so afraid of what we thought of each other. To their credit, none of the young men with showily developed forearms stood up to presume the title belonged to them. Eventually, the woman seated next to me, maybe the smallest woman in the room, stood up to perform the task of the “strongest” herself. Maybe she was a ballet dancer or yoga teacher or some other form of powerful physical entity contained in a tiny frame, but that wasn’t what the room was thinking about when every person in it burst into simultaneous applause and relieved laughter. The tiny woman had redefined the request to mean whatever worked for her and stood up despite knowing no one was thinking she should. All of a sudden we were in this together and that irrational mistrust of our community’s opinions seemed to matter so much less. We stood, we danced, we told a story together. I barely remember what the story was, because The Fever on paper is basically nothing. The Fever is the people in the room doing something together and half the thrill is that we’re all so scared. It worked for me precisely because I’m the conservative, walled-off square who can’t connect with Luminato.

The final show I saw at the festival didn’t feel like the festival at all. Out the Window was developed with The Theatre Centre and is a rare Luminato performance that feels like Toronto Theatre. I get grumpy about the festival’s obsession with international artists so it was nice to see a story about this city presented by artists who live and work here, filling in the spaces between well-funded festivals with quiet hard work and steady persistence. Written by Liza Balkan who is also the main character (played by Sarah Kitz), Out the Window is a piece of verbatim docutheatre about the 2000 death of a mentally ill Hungarian immigrant named Otto Vass and the ensuing trial of the four police officers charged with beating the literal life out of him. The second half of the performance is a structured discussion about the piece and the issues it deals with, with food and house lights and an open invitation for the audience to join the performers on stage in a “living room” atmosphere. It’s a thoughtful addition to the play and presenting it as a second half rather than a post-show talkback insightfully forces the audience to stay and listen even if we find it uncomfortable to do so. Like Burning Doors, Out the Window is a difficult, politically-charged true story but, unlike Burning Doors, it’s emotionally anchored in characters we get to spend some time with, focused tightly on a single case but still open to the epidemic problems that inform that one single case. I generally dislike docutheatre because the artist-as-character conceit can be naval-gazing and the actors usually resort to broad caricature in order to play tons of different roles. Out the Window is a little different. While the self-consciousness of the scenes directly about writing the play still grate slightly, Balkan was a witness to the crime and a participant in the court case so her presence in the story is not forced and the writing is focused enough that the only performer who plays two different speaking roles is James Graham who leaves his police officer character behind for a very short speech as Vass’ young son. The cast is uniformly excellent (David Ferry in particular stands out as a ruthless defence attorney) and, though no one but Liza is given a name, everyone is given a voice no matter how little we want to hear from them. It didn’t feel like Luminato, but it was the best of Luminato; take from that what you will.