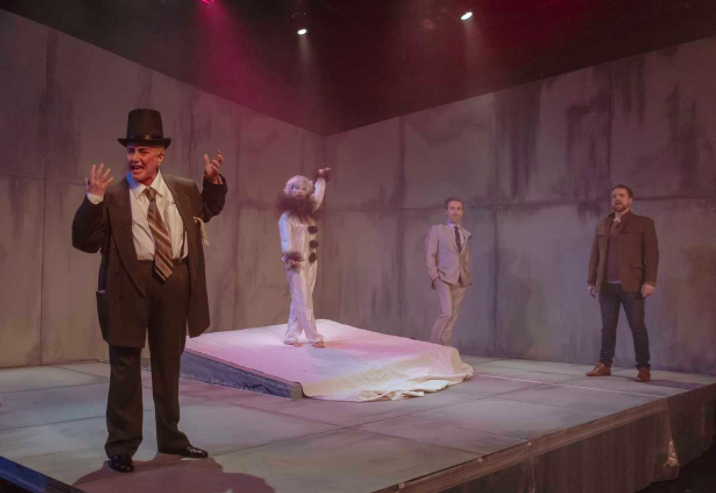 LULU V.7: a Horrifyingly Distant yet Related Past

Without a doubt, I am a huge fan of non-linear work. I feel it’s more reflective of how our brain’s complex neural pathways actually work. Red Light District and Buddies’ co-production of LULU V.7//Aspects of a Femme Fatale has had four years and seven versions to explore the intimate relationship one has with the subconscious, allowing the piece to ferment into the rich salacious performance it is today.

LULU V.7 is inspired by German playwright Frank Wedekind’s Pandora’s Box (1894). While the writer’s piece becomes increasingly perverse (the second half censored out of performance, in fact), this collective’s exploration has resulted in the contrary: moving from a display of carnal sex towards a broader discussion of what happens between love and grief. From prostitution to violence, from consensual perversity to criminal sexual assault, and everything in between, these themes were just beginning to be explored in the Victorian era. Strangely, they are overwhelmingly relevant today. Makes you really wonder if we are anywhere close to coming to terms, as a society, with the plethora of possible sexual expressions out there. One of the lines that stuck with me is something along the lines of: we are born into this world taught how to love. I feel it captures much of the essence of the play and what is discussed here. It’s as if objective exploration in regards to our sexuality has been paralyzed, amidst our bodily fears and social reservations. We seem to live in extremes: either we abstain or we risk it all – including our health. This – despite no longer being turn of the century – is the uncertain world that this ensemble admirably forges together.

Decorating LULU as the Pierrot archetype is brilliant since the pantomime has been many things over time. Most recently he has been depicted as a sad clown, but it would be too simple to only make this connection with a sad tortured LULU who cannot live a life of her own liking. Pierrot’s commedia dell’arte roots reveal an innocent fool, and the Romantics used him as social symbol of the alienated artist and post-revolutionary people. LULU too is many things from a girl becoming a woman trying to celebrate her sexuality, to a trapped doll painted for others’ enjoyment – literally – to someone who is nothing but a victim of men seeking to possess her.

Co-creator Helen Yung’s brilliant mesmerizing set helps us navigate this rocky territory. We are appropriately made witness to what’s happening on both stage left and stage right. Stage right in particular erupts upstage revealing the full performance process, as if peeling open one hemisphere of the brain.

Each performer is unique, focused, and immersed in the material. Craig Pike’s narration of events is on point – never missing a beat – and not unnecessary as many narrators become. His authentic demeanor helps build great trust with the audience and you keep looking out for him, wanting to know what he has to say next. Khadijah Roberts-Abdullah has amazing command of the microphone. Her voice in combination with the eerie voiceover effects is worthy of its own soundtrack. I’ll probably hear her reverberating “Luluuuu-uuu” in my head for weeks. Richard Lam is charming and funny. He tells a lot of stories that one senses are inflected by deeply personal experiences. Finally, Rose Tuong beautifully embodies the multi-faceted Lulu, from the character’s thrill and excitement at life to the depths of her tortured corrupted soul. Not an easy task, I’m sure, but one she tackles well. Makes me want to seek out more of this talent on stage! Along with four other performers, the whole ensemble often becomes a united chorus.

While the first half focalizes various relationships and sexual realities, the second half feels much more personal including breakout monologues addressing current events like the #meToo movement and Toronto village’s serial killer. The act cannot help but feel like a separate show. It’s not unlikeable, albeit distracting to try and make connections between Toronto, Canada and the world of LULU in 19th century Europe. The show is, without a doubt, one of the most layered performances I have seen in awhile, rich in intertextuality (it borrows from literary theories such as narratology, psychoanalysis and authorship) and artistic genres. Each of the performer’s actions is visceral, and at the same time detailed and carefully thought out. If sex, love, and death are your cup of tea, then you will not be disappointed.