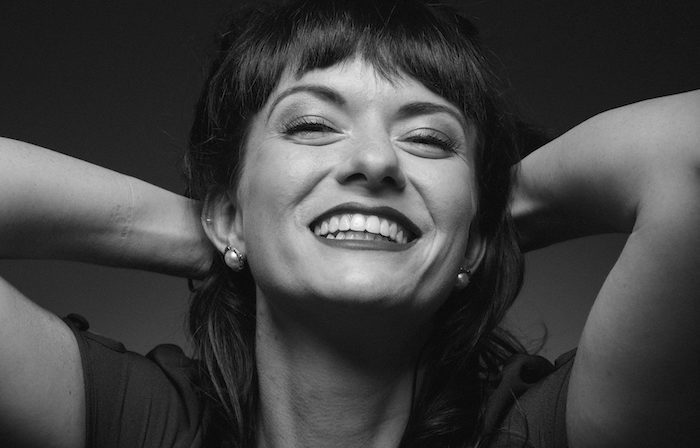 We’ve already heard from composer Barbara Johnston so it’s time to talk to the other half of the dynamic duo who created the wonderful faux-karaoke songs at the heart of site-specific Fringe hit Maddie’s Karaoke Birthday Party. Outstanding New Work-nominated lyricist Suzy Wilde is a prolific performer and creator who artfully balanced hilarious genre mimicry with really insightful character development to make Maddie’s friends some of the most memorable musical characters of the year.

Do you remember your first experience with theatre?
One of the first shows I was in was a variety show at a theatre camp I went to… We sang “I’m Gonna Wash That Man Right Outta my Hair” and literally washed our hair on stage while standing in buckets!

What are some of your all-time favourite musicals?
-All around faves: West Side Story, Urinetown, Gypsy, Sweeny Todd, Kiss Me Kate.

When did you start writing?
I started writing songs one summer when I was 15. I wrote a little song about my camp and performed it for all the staff and campers one night. Up until then, the older boys on staff were the stars of the campfire. Suddenly people were chanting my name, requesting my song at every campfire, and the song I wrote quickly became the camp theme song. The feeling of hearing other voices singing music that I wrote was so magical- and that joy never went away. I knew then that I wanted to write music for a living.

Where did the idea for Maddie’s Karaoke Birthday Party come from?
Barbara Johnston and I were approached by Brian Goldenberg with the idea and we thought it was brilliant. How could we turn away an excuse to try to write music based on existing karaoke hits?

The original music in the piece is a collection of songs from different genres that tell the characters’ stories but also simulate the sort of thing each of those characters would sing at a karaoke bar. How did you decide what type of song each character would sing?
Barb and I have been going to karaoke together since we were in high school and would attend Tuesday Night Karaoke at Crews and Tangos in the village. We know what songs go over the best and which ones are the most fun to sing. We also had the advantage of knowing the voices we’d be working with. So deciding on what songs to use as inspiration was pretty easy. For example, we knew that Kelly Holiff would be singing the 11 o’clock number and that she needed something dark and sexy that would show off her amazing belt. An obvious choice was “Black Velvet” by Alannah Myles.

What were some of the challenges of writing lyrics for such different genres?
Pop lyrics are generally vague enough to be relatable for a big audience.

The challenge for us was writing lyrics that enhanced the characters and moved the plot forward while still sounding “pop friendly”. The other challenge was making all of the music flow despite all the different styles.

Tell us about working with book writer Byron Laviolette to shape the characters and the story through the lyrics.
Working with Byron was a very different experience for us because a lot of his work is done organically within the rehearsal process. Due to the time constraints that come with doing a Fringe show, we had to have all the music prepared ahead of time. As a result, Barbara and I had more of an influence on the character and plot development than composers/lyricists would normally have. The cast members also had a lot to do with developing their own characters within the rehearsal space.

Do you and Barbara work together line by line or does one of you write first and the other does their part in response?
First we consult each other about overall feel and style of each song (usually coming up with one or two “temp tracks” to keep in mind while writing) and then we part ways with different assignments to work on individually. We’ll both come back with completed sections of music and finish the songs together. That is generally the easiest way for us to work. If we get blocked we’ll usually relocate- sometimes we’ll leave the instruments at home and go somewhere and just sing. We wrote a lot of MKBP sitting on the bleachers in the baseball field at Trinity Bellwoods.

What were some of the biggest challenges of doing an immersive site-specific musical?
I would say that in our case, staging and mic’ing our singers properly was the biggest challenge. We really wanted to position the singers all over the venue but doing so at [the Monarch Tavern] and having them remain visible (and audible) was tricky. We ended up renting wireless microphones in the end.

Which character did you most relate to?
I really related to Casey, who was portrayed by Erica Peck. Casey is Maddie’s estranged best friend and she sings a song about the heart-break of drifting apart. I have a few friends from high school that I used to feel very close to and managed to lose touch with over the years. I think I really drew from my own personal sadness and frustration when writing “I Know You Better Than That”.

Did you have a favourite moment in the production?
There were so many moments I loved in the show! If I had to choose one, it would probably be when Wynn sings the song “Spotlight”- definitely the song I feel most proud of. Jeigh Madjus’s belt is so incredible. I always got goosebumps standing at the back of the venue listening to him sing.

What are you doing now/ what’s your next project?
Right now I’m writing a show with Matt Bernard (creator of Romeo and Juliet Chainsaw Massacre). It’s a hilarious and fun-filled musical-comedy about the end of the world called Crack of Doom. It will be premiering next month for Bravo Academy’s New Musical Theatre Intensives series.

Do you have anything you’d like to add?
We’re honoured. Thank you for the nomination!