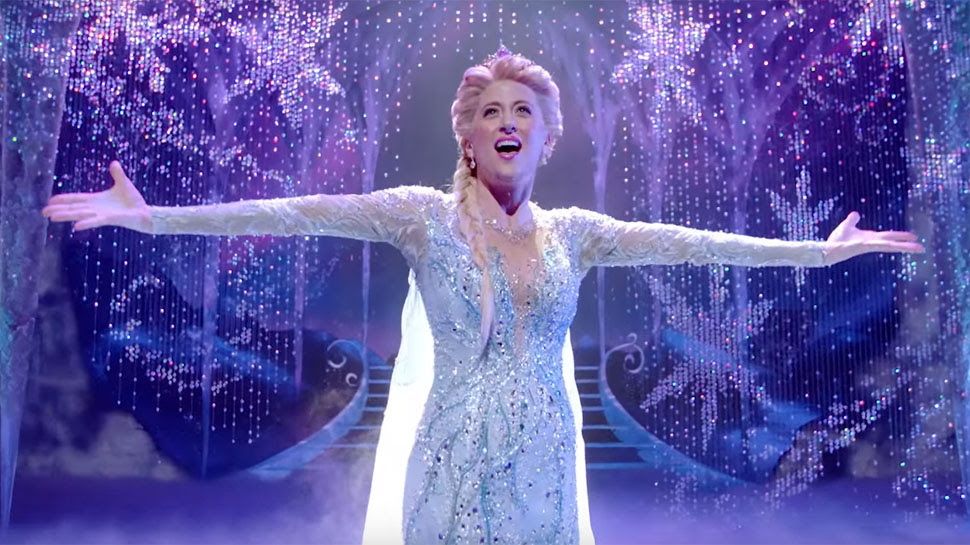 No, Really, Let It Go: Frozen on Broadway

I realize that The Lion King musical is a terribly high creative bar to reach twice, but Disney fails again and again to reinterpret its cartoon source material into worthwhile theatrical productions. Perhaps it is the allure of guaranteed ticket sales from a fiercely loyal fan base. Perhaps it is the incorrect assumption that a beloved animated film can translate well to the stage without artistic reinvention. Whatever the reason, Disney’s juggernaut blockbuster, turned Broadway baby Frozen the Musical fails both its source material and theatergoers as a lukewarm adaptation of the Frozen film, which would be more appropriate in a Disney theme park than on the Great White Way. There are moments of delight, emotional resonance and hypnotizing spectacle in the musical; however, despite these elevated artistic instants, the truth remains that Frozen suffers from a weak book, unmemorable original music and a nagging sense that this choreography, these lines, these costumes, this puppetry and this staging has all been done before.

For those unfamiliar with the story, Frozen is the tale of two sisters of royal birth, Anna and Elsa, who are orphaned at a young age. Elsa, the eldest and heir apparent, suffers from a magical malady causing icy emissions to leak from her hands, sometimes to the delight of her young sister (do you want to build a snowman?) and sometimes to her peril. Elsa grows fearful of her power, bottling it inside until it is released on her coronation day with devastating meteorological results. Her goofy sister Anna, following years of lonely living with her secretive sister, falls in love with the first man she meets but soon ventures off after her sister who has fled for the mountains. Facing the unknown with nothing but an ice salesman, Kristoff, his trusty reindeer, Sven, and a not-so-imaginary snowman that Elsa created named Olaf, the group sets off to save their country from Elsa’s unending winter and to bring the Queen back home, discovering along the way that true love is more complicated than the Disney films of yore would have us believe.

Three-fourths of the way through the second act, the young girl next to me who was decked out in her best Elsa dress was laying on her mother’s lap, thoroughly disinterested in the action on stage. This, perhaps, tells you all you need to know about Frozen. Setting aside the fact that the story in the film Frozen is weak to begin with, there are motifs in the plot worth introspection. Frozen stands alone as one of the few Disney films where the love explored, the love that saves the day, is not a love between a princess and a prince but, rather, the familial love of two sisters. This narrative remains in the musical, but the love between the sisters is never given sufficient time to blossom (the two leads do not even get a song together), and the book instead builds out unnecessary moments of platitude and spectacle without much substance. Case in point – the Act II opener “Hygge” which celebrates the Danish word for happy living replete with a naked spa kick line that had a few parents stirring uncomfortably in their seats as their young children sat confused nearby. The entire sequence serves little purpose other than to allow Anna a costume change. It is filler material and bizarre filler material at that. The results are a narrative entirely driven by two women running after each other without any real goal or plan to redeem the other until a climactic sequence reveals that love solves everything.

The failures of the book might be overlooked or at least somewhat redeemed by strong musical support and elevated artistry in the design of the production, but, alas, that too falls short of expectations. The cultural phenomenon “Let It Go” features as the Act I show stopping number, but actor Caissie Levy, who has delivered many gripping performances on Broadway stages, seems too aware of the importance of the number in the production as she belts the piece with pop-style vocals. Other fan-favorites like “Love Is An Open Door”, “Do You Want to Build a Snowman” and “In Summer” enliven the audiences, but new numbers such as “Dangerous to Dream”, “Monster” and “True Love” are lethargic ballads that leave the audience yearning for the next familiar tune. Rob Ashford’s choreography appears pulled from a standard Broadway guidebook – requisite ballroom dance number, standard kick line, mild pacing to and fro during a somber song. As the townspeople take up arms in search of the evil Queen, they appear to channel the villagers of Wicked. Elsa has little to do other than wave her arms about as stiff set pieces drop down and pop up from the floor as an “ice castle” evolves under her magical power – a simple turntable providing some movement to the scenic design. But none of the set pieces dazzle or awe and, given the prominence of magic in the plot, Disney’s Imagineers should have been consulted to craft some inspired, unique design for the production.* Yet, only a simple curtain of reflective “crystal” provides any sort of visual stimulation in Frozen.

The performances by the ensemble of Frozen are acceptable, if uninspired at times, and certain actors thankfully inject the tepid show with moments of delightful levity. Patti Murin has a playful pluckiness as Anna that befits her cartoon inspiration, and Caissie Levy is at her best when she is empowered to run after her sister (in a stunning pair of white pants designed by Christopher Oram, which may be the best costuming decision made in the entire production – no woman actually wants to save the day in a fitted gown and heels). Broadway newcomer Jelani Alladin’s Kristoff is perfectly acceptable – neither revelatory nor droll, which is approximately how Jonathan Groff’s performance in the film could also be described. Kristoff just does not have much personality or purpose aside from leading/following Anna around. Greg Hildreth appears to embody Josh Gad in cadence and whimsy while expertly controlling his Olaf puppet designed by Michael Curry, and child actresses Mattea Conforti and Brooklyn Nelson bring a sense of childlike wonder and glee to the show. Timothy Hughes excels in his commitment to the absurdity of his character, a tribal mountain creature named Pabbie, both in action and in dialogue, and he deserves accolades for taking himself so seriously in what is, perhaps, the worst costuming decision of the production, complete with an overlong tail that looks awkward and uncomfortable.**

Is Frozen a cataclysmic failure as a stage show? No, but it is neither revelatory nor necessary. Disney seems comfortable with the notion that audiences will flock to see their beloved animated film come to life onstage irrespective of the artistic quality of the production. This is perhaps the most frustrating aspect of Frozen on Broadway: Disney seems to take the audience for granted rather than seizing the opportunity to create, to excel, to innovate, to elevate – all of which were possible and none of which were achieved. Disney had the opportunity to make magic and delivered little more than an underwhelming mimicry of their old work, which is a cheap trick to play on audiences shelling out hundreds of dollars.

*For all its faults, Aladdin features one spectacular magic carpet that really soars – a remarkable feat on a Broadway stage.

**They should have kept the rock trolls from the film.