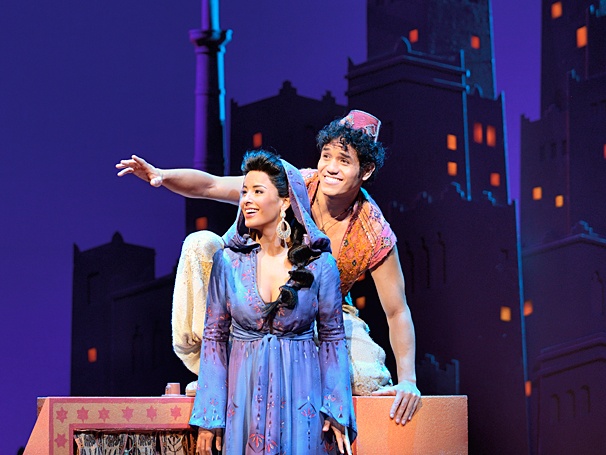 Aladdin: Not Such a Magic Ride

Disney. It is divisive (much like this review, I am sure). For some people that single word conjures up images of dancing princesses, magical worlds, and the idealistic notion that love and friendship conquer all. For others it is a corporate conglomerate that gouges young parents out of their hard-earned dollars and routinely sets feminism back years. Whatever your position on this entertainment juggernaut, one fact is certain – Disney excels at re-packaging their classic movies for resale to today’s audiences. Broadway has become a revival mecca for Disney classics. Beginning in 1994 with Beauty and the Beast, Disney has produced no fewer than six major musicals on Broadway, including the wildly creative and award-winning The Lion King, which is Broadway’s all time highest grossing show.* Disney’s newest musical, Aladdin, opened at the New Amsterdam Theatre on March 20 with the hopes of striking theatrical gold yet again. Aladdin is bright and shiny and ostentatious . . . and completely devoid of substance or theatrical ingenuity.

I should be part of the audience attracted to Aladdin. I was six when the movie Aladdin came out, and, at the time, considered my homemade Jasmine costume among my Mom’s greatest achievements as a human being.** Unfortunately for Disney, I grew up and am more discerning today. If I am shelling out $150 for a Broadway ticket, I need more than fond memories to convince me that a show is worthwhile.

For those who do not know, Aladdin is the story of a young “street rat” who finds a magic lamp and befriends the genie inside. The genie grants Aladdin three wishes that he uses to try and woo Jasmine, a disgruntled princess who is being forced to marry a prince. Evil Jafar, advisor to the king, attempts to prevent Jasmine’s marriage so that he can become king instead. In other words, it’s a rags to riches love story with an incredibly important message: find a powerful friend who can position you to marry into a wealthy family, at which point in time you can reveal your true self and will live happily ever after.***

Hard core fans of the movie will be disappointed to know that certain key characters are absent from the stage show, including Aladdin’s monkey friend Abu, who has been replaced with three stooge-like friends, and Iago who is still present but no longer a parrot. Jasmine’s pet tiger Rajah has also been given the heave-ho. Aside from these changes, the plot is remarkably similar to the movie. Which is to say, not well-developed. Plot holes can, to a certain extent, be forgiven in a cartoon. Less so on stage. None of the characters develop very meaningful relationships and even the friendship between Genie and Aladdin is difficult to buy in this production. Moreover, writer Chad Beguelin excels at selling the Disney brand on stage, which could be funny if it wasn’t so self-serving and contrived. I am referring to a scene in which Genie sings a medley of Disney songs from other Disney movies. The New Amsterdam Theatre is not located in a Disney theme park, so why is the audience treated as if it were?

Beguelin deserves credit for addressing one of the biggest problems with the movie Aladdin, but, in attempting to right Disney’s original wrong, he managed to inject some incredibly hokey lines in an already weak script. I am referring to Jasmine’s sole life goal of choosing her own husband, which is the crux of her existence in the plot. This is the sort of storyline that has led many women to reject Disney as an entertainment medium. In the stage production, Jasmine is still looking for love, but, ultimately, her father decrees that Jasmine will rule as equal partners with her chosen suitor. Great! Equality for women! It would be a welcome change if the lines about equality were not so blatant and over the top. It was as if the writers were overcompensating for the offenses of the movie and decided to throw subtlety out the window.

The original music and lyrics remain relatively untouched in this transfer from screen to stage, although the inclusion of the beautiful song “Proud of Your Boy,” which was cut from the theatrical release of the movie, is a welcome addition to the show. That being said, the rest of the new songs are completely forgettable. More problematic is the lackluster performance of what should be the blockbuster song of the show – “A Whole New World.” Much of the failure of this soaring love song is due to the lack of romantic chemistry between Adam Jacobs (Aladdin) and Courtney Reed (Jasmine).  Jacobs is charming in an unassuming sort of way, and Reed is watchable although her acting is painfully forced at times (I blame this to some degree on the script). However, “unassuming” and “watchable” are not words that inspire much confidence or interest.

Thankfully, there is one performer that inspires, excites, and radiates energy on stage: James Monroe Iglehart. Iglehart’s performance as Genie will make you forget about Robin Williams entirely. His exuberance is infectious, his dance skills are spectacular, and his enthusiasm for the role is palpable. I last saw Iglehart in Memphis and cannot wait to see him cast in a musical that is truly worthy of his talent. In addition to Iglehart, Jonathan Freeman reprises his movie role as the insidious Jafar. Freeman makes a sinister villain, as he did in the movie, and he finds the perfect counterpoint in Don Darryl Rivera (Iago) who plays the part of the doting but comedic sidekick quite nicely.

The success story for this production lies in some of the technical aspects of the show. Gregg Barnes’ costume design is bright, bold, and beautiful, and Casey Nicholaw’s choreography is both lively and captivating. However, my technical achievement award for the show is bestowed upon whichever Imagineer-wannabe created Aladdin’s magic carpet.  This singular piece of theatrical ingenuity is a sight to behold (a sight apparently without strings!), and watching the carpet fly gracefully around the stage almost makes up for the less than uplifting romantic encounter between Aladdin and Jasmine on the carpet (yes, I did just write that).

There will be numerous children and adults alike who will sit through two plus hours of flashy dance numbers, pyrotechnics, glittery costumes, and amazing technical feats, and who will leave the New Amsterdam Theatre completely fulfilled. But, for those who want something a bit deeper, more meaningful, or even remotely fulfilling from their theatre experience, Aladdin is the cheap chocolate egg of theatre – a visual feast on the outside with a disappointingly hollow center.

*Others include The Little Mermaid, Tarzan, Mary Poppins, and Newsies.

**I have since learned of her many impressive personal and professional achievements.  Despite my naïveté at the time (see comment re: Disney and feminism), that costume was still badass. At least, until there was a blizzard on Halloween.

***That is what Disney was going for, right?