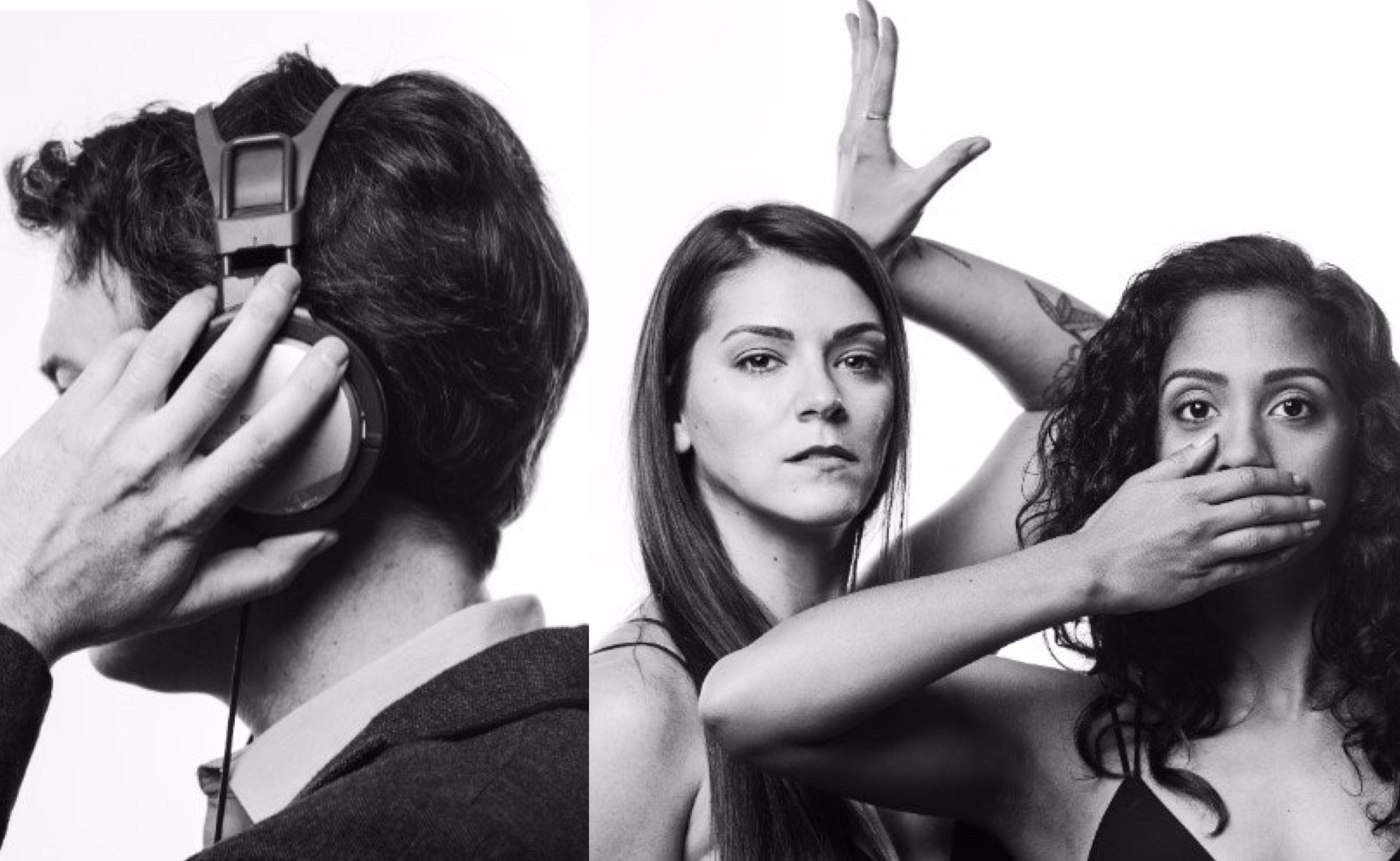 Another topical Next Stage piece, Jonno, offers a fictional account of a powerful, well-known radio host sexually assault women in Toronto. Most Canadians will recongnize the play as a thinly veiled fictional reworking of Jian Ghomeshi’s ‘alleged’ of sexual assault and hassment. In the first few moments, actor Jason Deline, playing the title character, starts his opening monologue with a kadence and pace so similar to Ghomeshi that it instantly made me uncomfortable; even going to the point of saying “happyWednesday”. While I appreciate the work put into to capturing the conversations, confusion, disgust of the circumstances surrounding these event—and the many sexual assault cases that would follow—I found Jonno deeply troubling. While I believe the intentions of the creative team were nothing but honourable, in practice, I worry that Jonno offers a heavy handed discussion of sexual assault, pathologizing abusers, ignoring the intricacies of rape culture, and offering very little in terms of feminist depictions of survivors. While I certainly appreciate the intent, for a play that claims to prioritize the voice and opinions of women and survivors of sexual assault, Jonno sure does get a lot of stage time.

My concerns with the play are more big picture; I believe what they have created is at odds with their intentions. While you could argue there are structural anomalies within the narrative, I enjoyed the performances, set, and the decision to have the actors all on stage at once—acting as witnesses to the many assaults. Many moments were interesting and well executed. The play’s depictions of sexual violence—right off the top of the show—were powerfully delivered and well-staged. The choice to use shadows to depict sexual scenes was excellent, allowing us to access some difficult topics in a safe, accessible way.  The most interesting choice was the formal mixing of magical realism with actual events, giving a surreal energy to the stage happenings, a truly inspired choice. Without giving too much away—one certain magical character, performed by the brilliantly, at times heartbreakingly, deadpan Allan Michael Brunet, was a highlight.

However, many moments of the show gave me great pause. We watch the three women drink wine, talking about Jonno’s possible hang ups with his mother, blame each other, tip toe around the racism that came with Jian Ghomeshi’s allegations. We listen to them theorize Jonno, police each other, get uncertain, and then drink. All the while sex-in-the-city like music plays softly in the background. While perhaps the intention is to make these familiar moment of female gossip and comradery strange, what results is laughs at the expense of one character chugging her glass of wine, and hmm and haws around the overall heavy handed, and at time pedantic conversations. All of this leads to an obsession with Jonno. There was a moment during these scenes where I wondered if this play passes the Bechdel Test. While the Bechdel Test is no proof of feminist content in a play (the opening to Baby Got Back technically passes the Bechdel Test) it is an interesting litmus test for the kind of focus that a play has. It does pass the Bechdel Test. But I asked this question to myself because everything was about Jonno. Yes, the characters are named, but we never know them as anything other than victims. The glimpses we get at their lives fall into problematic representations of women that are age old. Maureen wants a baby. Bernadette is the intelligent hooker. Marcy is a young left wing feminist. We find these out in a few moments, and these short descriptions are meant to be enough for us. The play is not called Dana, or Marcy or Bernadette or Maureen. And we should be asking why not.

Jonno on the other had is given a lot of stage time for him to yell at his imaginary friend, for him to tell us how much he loves women… as sexual objects. For him to talk about his book (for anyone who went on a date with Jian, this will ring a little too true). But we are offered a reading of him as slightly delusional, not always being able to separate fiction from reality. While he is certainly vilified—in broad strokes that ignore some of the larger issues around rape culture—he is equally pathologized. He is not seen as a normal guy. This is incredible dangerous. The danger of sexual assault and rape culture is that it is ubiquitous. That it is an accepted, normalized culture. Jonno sees every women as coming on to him, in ways that are portrayed as humourous in the play. We are asked—too often for my comfort—to get into the mind of the kind of person who would hit women without their consent. While the playwright does not go so far as painting Jonno as the anti-hero, I leave the play knowing way more about the perpetrator than his survivors. And I am left with the message “the kind of dudes that do this have mommy issues or ego issues or difficultly separating truth from reality”. If only this were true. There would be a lot fewer sexual assaults.

Perhaps my reading of this play is influenced by the recent lawsuits filed against Soulpepper’s artistic director Albert Schultz. There was certainly something there Wednesday night, with the ink of this news still wet for many of us, hanging in the air like old tuna. We are talking about the intricacies of rape culture more, which is incredible, so I’m thrilled whenever anyone is writing about these issues. But I want more. I want more than explaining the difference between victim and survivor. I want more than a director who is sad to discover that this show is still relevant. I want more than playwright who thinks that Jian Ghomeshi was one of the more famous cases of sexual assault. I want more than women blaming each other. I was more than pedantic discussions and platitudes. More than us vs. them, women vs. men, black vs. white arguments. I want more than women getting the last word. I want them to have all the words, for the whole 75 mins. I want more than Jonno is offering.

That “F” Word is a lovely, vibrant, and youthful performance that explores the complexities around feminism. Presented by SaMel Tanz, and choreographed and co-directed by Melissa Hart and Samantha Schleese, the performance is bursting with energy, and asking some interesting questions. That “F” Word aims to be celebratory in its depiction of feminism rather than challenging, bringing us into a space where we might cheer, laugh, and applaud feminist bodies. It is a beautiful addition to the Next Stage program, and one not to miss.

That “F” Word is a dance piece featuring 16 emerging dance artists. While their age isn’t always clear—some dancer say they are in high school, while others seem more university-aged— I would guess that the majority of the dancers are in their early-mid 20s, while others seems much younger. I bring this up to point to a uniqueness in the performance: how often do you see young women talking actively about their bodies, objectification, feminism and power? In addition to this detail, the show presents a unique and complex dance language, doing duets, solos, and group pieces, with tight transitions. Some pieces are set to monologues and political speeches, others are humourous; a dance in bikinis lampooning the famous Venus razor ads was a highlight. Other dances offer reflections on body image, gender and race.  The opening group dance weaves different dance compositions in and out of each other, and some of which return, like a coda, at the end of the show. There seems to be a gestural memory of what feminism is, which is argued about, laughed at and contemplated on, through the divergent dances performed.

In the end, I was impressed with the variety of ideas that That “F” Word  brought to the stage. Equally, the diversity of bodies was commendable. While we were a sleepier Wednesday crowd, the dancers danced on, bringing energy to the stage that had many leaving the theatre smiling. With the diversity of performers, topics, and even styles of dance, That “F” Word begs what “F” we might actually be talking about: Fat, Femme, Fair, Female, Fuck It, Fun, and of course, Feminist.