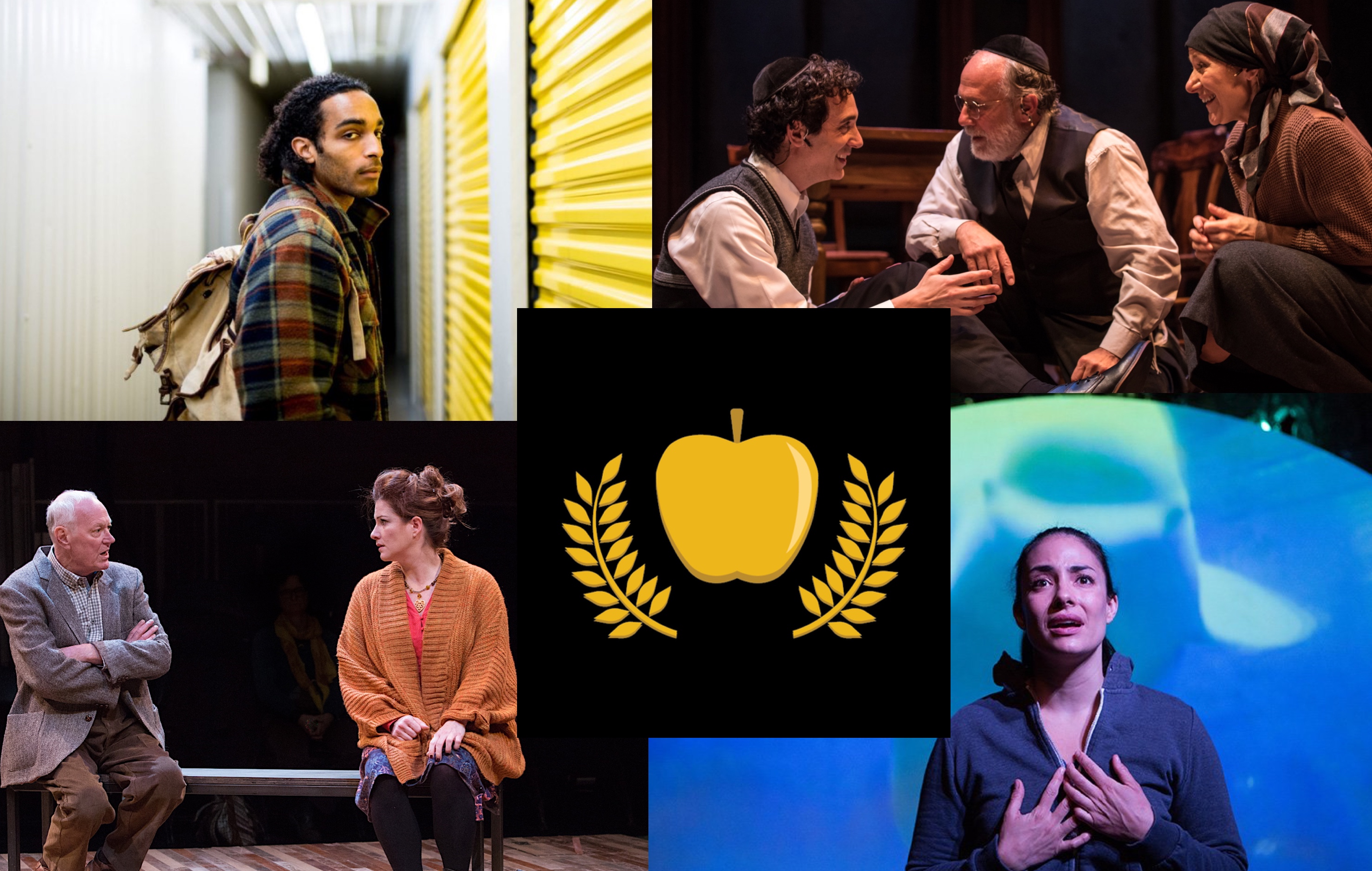 On Stage in TO: Small to Big

I went back and forth on the title of this On Stage in TO roundup, the options being “small to big” and “best to worst” because both descriptions apply to the shows I’m about to discuss in the order in which I’m going to discuss them. Read into the pattern what you will- perhaps small, independent companies have more creative freedom; perhaps the bigger, better funded companies have gotten complacent; maybe it’s a matter of taste (criticism is subjective, you’ll never hear me argue that it isn’t); maybe it’s a coincidence (it’s certainly not always the case)- but the pattern is most definitely there in the last five plays I’ve seen on Toronto stages: the smaller the production, the bigger the impact.

We start with The Mess, the second piece co-created by playwright Polly Phokeev and director Mikaela Davies who won a MyTheatre Award last year for the first play in their How We Are series of intimate, site-specific one-acts. A three-hander set in a cramped storage unit, The Mess builds insightfully on the immediacy and ambiguity that worked so well in Morning After (the first play, originally produced as How We Are before that became the name of the larger series). Davies elicits small, evocative performances from Robyn Stevan, Rebecca Applebaum and Michael Ayres, observable on a hyper-detailed level as they contend with audience members mere inches away. Stevan’s line flubs detract from the intense realism of the piece and, though Phokeev’s text dances with a windfall of complicated issues, the tension never rises high enough to pack the expected punch. But that’s me being nitpicky and looking at The Mess in the shadow of Morning After; as a standalone piece, this is unique, honest theatre that’s still some of the best I’ve seen this season.

The next piece on the list is the last show of Filament Incubator‘s second season. The Tenth Muse by Julie Foster is an ambitious text that presents the (semi-imagined) story of ancient poet Sappho as retold by a gossipy greek chorus. Though the frame illuminates intriguing themes about the unreliability of subjective storytellers and the judgemental eye of history, these mostly comic moments of narration are a clunky distraction from what is otherwise a captivating and well-told tale. Director Claren Grosz is a strong physical storyteller with a keen eye for the nuances of human relationships. Though three of the cast members play multiple roles, the personal dynamic shared between Olivia Croft’s sublime Sappho and each character who populates her world is impressively distinct. Kelsey Dann plays Sappho’s mother, daughter, and lover with remarkable clarity, a slight shift in physicality and tone easily distinguishing the type of chemistry at play without any loss of intimacy. Jovan Kovic shows a broader, more extreme range, making his biggest impact in first a scene of intense ferocity then one of marked tenderness. Dann, Kovic, and Jack Comerford suffer under the weight of the over-stylized chorus roles but generally fare well on the bell curve of recent graduates working for very little to no money. Croft, however, delivers a leading performance that could be plucked from its Kensington basement home and measured triumphantly against what’s happening on any stage in the city. Her Sappho is larger than life and deeply vulnerable, serene and deliberate but emotional and intense, unabashedly sexy and distinctly uncompromising. It’s the sort of performance you see indie theatre for, that unforgettable “who is SHE?” reaction from which no financial limitations or rough-edged production quality can detract. Sure, the transitions could have used more of Daniel Bagg’s atmospheric sound design to cover the practical bumps and thumps, and someone during tech needed to sit in the back row to make sure the sight lines all work, but there’s something special happening in Kensington Hall and if you’ve been looking for Toronto’s next great actress, that’s where you need to go.

My Name is Asher Lev– a Harold Green Jewish Theatre Company/Studio 180 Theatre co-pro adapted from the novel by Chaim Potok- has similar narration struggles but a reverse situation in the performances. As the titular artist trying to reconcile his passion with his religion, Jonas Chernick has the unfortunate task of playing a character who introduces himself to the audience as a genius. “I’m THE Asher Lev” he says, right off the bat, and the success of the story balances on our willingness to jump immediately on board with the premise that this kid is so unbelievably talented that for the world to miss out on his creations would be a tragedy. Playwright Aaron Posner doesn’t investigate Asher’s inner life or flawed character nearly enough, despite giving him the fourth-wall-breaking narration. Rather than the artist’s personal feelings about how art is pulling him away from his judaism, the play focuses on external forces- his parents’ opinion, pressure from his artistic mentor, the thoughts of a gallery owner. With conflict so external, the answers feel too easy, and with this subject matter they really shouldn’t be. Luckily, said external forces are the theatrical highlights of the production, played with chameleonic bravura by Ron Lea and Sarah Orenstein. It’s a solid production but it left my heart largely unmoved.

Written and directed by Rosa Laborde, Marine Life at Tarragon is a mess of fascinating ideas and unclear characters set against standout set/lighting/projection work from Trevor Schwellnus. Justin Rutledge is a captivating musician but not a natural actor yet he’s given the text’s most challenging role- a troubled young man with an awkwardly undefined mental disability of some kind. Nicola Correia-Damude and Matthew Edison excel at Laborde’s charming romantic banter but lack the chemistry necessary for the plot’s stakes to make much sense. The text touches on a great, under-explored question about how fiercely one can hold onto their principles without giving up their life, and there’s a metaphor about global warming in there somewhere that’s either inspired or obvious, or perhaps both. But too much is happening for any one thing to come through clearly.

The final show on this list is in the largest theatre (Canadian Stage’s Berkeley Street Downstairs) and features the biggest waste of money (unless you’re doing Les Mis, you don’t need a revolving stage; here it just reads as lazy or like maybe they had a budget surplus?). Simon Stephens’ Heisenberg is actually just a two-hander one-act, not the sort of show one might usually call “big”, but the aforementioned features push it into that category, as does its buzz-worthy distinction as the final piece of direction in Matthew Jocelyn’s 9-year tenure at Canadian Stage. Jocelyn does manage to infuse the production with some intimacy (plus surprisingly fun transitions) and David Schurmann gives a lovely performance, gifted with a character capable of subtlety. Poor Carly Street is not so lucky. She gives it all she’s got but at the end of the day she’s stuck playing the sort of manic pixie adult woman who in no way resembles any human being I’ve ever known to exist in the real world. She seems to have been given the lone direction of “wacky” and various bits of condescending stage business don’t help with the infantilization (at one point Schurmann literally boops her nose, dog-meme-style). It’s a remarkably irritating play, especially for this particular moment in history, like Garden State if it was made by Woody Allen. Street’s character Georgie, a woman in her 40s who plot-wise should have bigger things on her mind, spends most of the second half listing things about Schurmann’s 70-something Alex that she finds improbably sexy (his voice, his fingers, his smell, his wrinkly skin). I was surprised to learn that Stephens is only 46 because the whole thing feels so pointedly like old man wish fulfilment. I like that Jocelyn wanted to go out on something quiet and personal rather than really leaning into blockbuster budget theatrics (rotating stage aside) but this is an ill-timed mess of a play not at all helped by a fine but definitely not tactful staging.