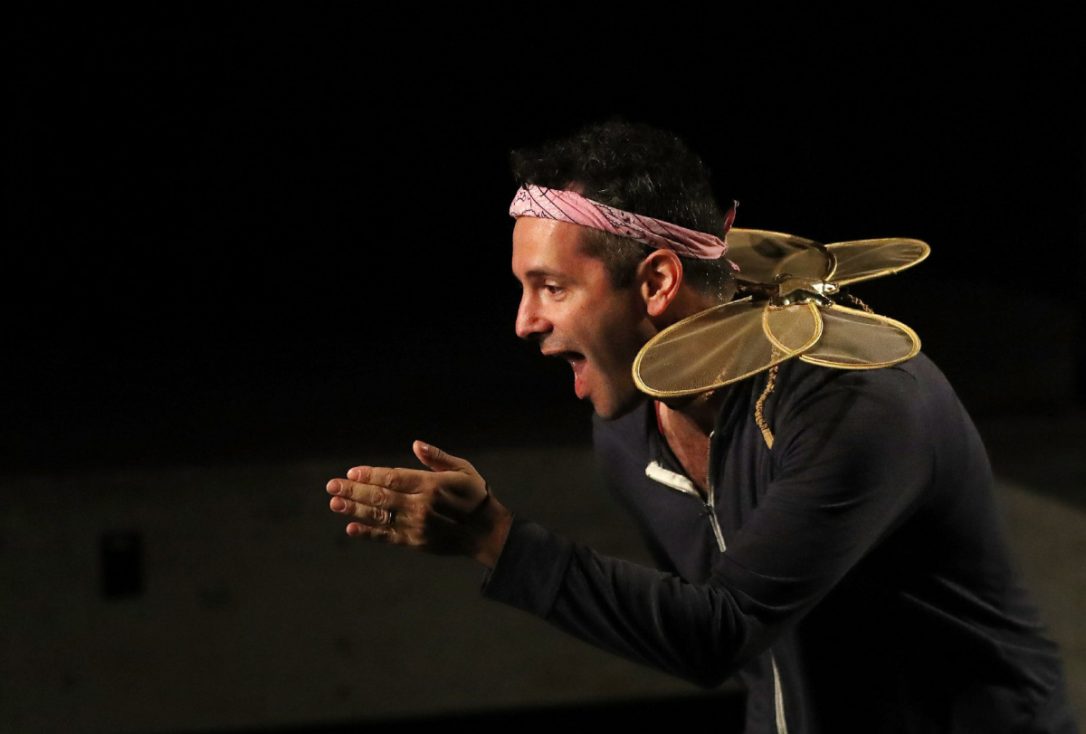 This is a very intellectual description for a theatre review, and of a very visceral experience. So let me step back and say more about what that means. This production declares itself intentionally provocative, and provoke it certainly does. Lazarus’s story hits on a lot of dark truths about what it means to grow up masculine, how that manifests in what you find relatable, what you find moving, what you find entertaining, and what you find arousing. He lists the inventory of his teenage porn collection, and despite its mainstream character, I sag inwardly as he rolls off categories of objectification, the folders to which women get assigned.

He grows up. He has a few sexual encounters with real women. Some of these women are sex workers (‘hookers’). He gives up sleeping around (including no longer sleeping with sex workers, he adds for clarity). He gets married, his wife gets pregnant, and he has a daughter. Rote modern narrative, and, at the same time, nothing he ever could have expected. Nothing he has been prepared for.

Lazarus’s performance manages, for me, to be alternately charming and revolting, and always very powerful. As a performer he confidently and consistently holds the attention of the audience, and weaves his way through a story using minimal props, instead reflecting his world to us through his own imagination and impersonation and reactions. The piece also has a very confessional feel. He mentions in the programme that parts of this story are true, others less so. Lazarus is telling a story that is a compilation of overlapping and shared truths of many different men. He may not have personally lived each experience he relates, but it feels as though he has.

What I find repulsive is not Lazarus’s acting (which is very good), but seeing the world through the lens of a man’s eyes. It is disheartening, too, realizing how pervasive that perspective is. It’s interesting to me how he depicts his wife’s labour, for example. On the one hand, he says he’s in awe of her ability to deal with something he admits he’d never be able to handle. When he complains to the doula that he’s tired, she looks him in the eye and tells him to ‘get over it,’ snapping him (momentarily) out of his self-absorbed bubble and reminding him that he is not, in that moment, the person who needs to be looked after. At other times, though, as he portrays his wife in labour, it feels mocking (something I also noticed when he impersonated his daughter). And I’m not sure what to make of that. Is it just because any time a man impersonates a woman we find it ridiculous and therefore funny? Or is it that on some level, we’re really seeing that this character finds his wife and daughter ludicrous? Or both?

Lazarus exposes not just the dark and hypocritical sides of masculinity as it is currently conceived, but also finishes the play in a typical masculine fashion: with a sense of helplessness and frustration. No doubt men will connect with this piece, something that acknowledges the grotesqueness that is rarely openly spoken about. It also reveals an enormous gulf in how women and men are socialized, and how that impacts our agency and respective abilities to interpret the world. At one point, he describes an affair with a very young woman who asks him to hit her. He does, too hard, and she apologizes to him for it. “Who does that?” he asks, aghast that she was the one to apologize to him. “What kind of person thinks like that?!” Yet the play gives us the very answer that this character cannot see for himself: women. Women are trained to think like that. In fact, he unwittingly delivers this very message to his own daughter towards the end. In a moment of uncontrolled masculine aggression, he attacks a friend in a misguided attempt to protect his daughter as she stands by, watching and terrified. His attempts at reconciliation centre around his own feelings and intentions, that he does everything for her, and how much her avoidance hurts him, leaving no room at all for her questions and worries and feelings. It reminded me of so many conversations I’ve had with former partners, in which they look at me, helplessly, as if to say, ‘yes I see I’ve hurt you but I have no idea what to do to make it better, and I can’t handle your feelings about it.’ He knows he has hurt her but has no idea how to take responsibility for it. She’s expected to fix it, to put all her feelings aside for him and his feelings, and all I could think of in that moment is the lesson that little girl would take from that interaction, what she would learn about the fragility of masculinity and her responsibility to prioritize it over her own need for safety and validation. How that leads to a culture in which men act terribly and women do not – could not, until recently – say or do anything about it, without the conversation turning immediately to how much damage this does to the perpetrator. To his feelings. To his future.

Or worse, men are applauded for barely even gesturing at the bar of what might be considered ‘taking responsibility’. As I write this, official news about Louis C.K.’s history of sexually harassing women is circulating around the avenues of the internet. So too, is his response, acknowledging the truth of the allegations, saying he understands that he has ‘hurt feelings’, spectacularly failing to even issue an actual apology, and betraying his complete lack of understanding of the depth of harm he actually caused. It is, in my view, a clunky and hollow performance of what taking responsibility actually means, but it’s interesting to see how women are being chided about their anger towards him, as though he should be given a medal for not denying it outright or responding as badly as Harvey Weinstein or Kevin Spacey. That it’s still our job to set our feelings aside to smooth over the anxiety of his numerous male fans.

Lazarus’s story shows us how, even when they genuinely want to take responsibility as he does with his daughter, men are often at a complete loss. As a result, the ending left me feeling raw and kind of angry. On the one hand, as he currently is, Lazarus’s character doesn’t have anywhere else to go. On the other hand, the ending felt like less of a catharsis to me and more like a cop-out. He stands on stage, looking out at us and declares two things to be true: that he loves his daughter dearly, and that it really sucks to have a daughter. (As though being an actual woman isn’t a thousand times harder than parenting one.) What worries me most about this ending is the implication that somehow women are still a burden for men, because we are too complex. We feel too much, we get too scared, we think in ways he can’t relate to, we are simply too much. That men’s world somehow separates into ‘tits’ (simplicity) and ‘cunts’ (complexity) and that it’s all far too much for him to handle. And this ending – this plea to the audience to validate his need for simplicity – reminds me of former partners, and of the character’s pleas to his daughter. As the lights turn from Lazarus out into the audience, shifting the power dynamic and exposing us, the show ends on a note that says: ‘here is the ugly truth of masculinity, here is how it has injured. But I have no idea what to do about it. Can’t someone tell me how to fix it?’

The real problem, of course, is not that women are too complex but that men are too simple. That men do not have the emotional and intellectual apparatus to be able to grapple with the complexity of women, and the world. But we cannot end the conversation here. It cannot be that we just throw up our hands in frustration. Men will encourage other men to see this show, as they should. Lazarus does a great job of laying out not only how toxic masculinity is, but also how pervasive and ingrained it is through the way he humanizes it. But as a woman, it leaves me cold. I worry about the way this piece will be taken up by audiences, how it will be lauded for its bravery and honesty while women continue to bear the burden of toxic masculinity. It’s great that we’re finally openly acknowledging the damage of traditional masculinity, that men can say ‘yes, I have injured, and I see that.’ As the lights dim on him looking desperate and helpless in the face of this, the question burning inside of me was: once the catharsis has passed, and men have congratulated each other on even being able to acknowledge this, what the fuck are men going to do to fix it?