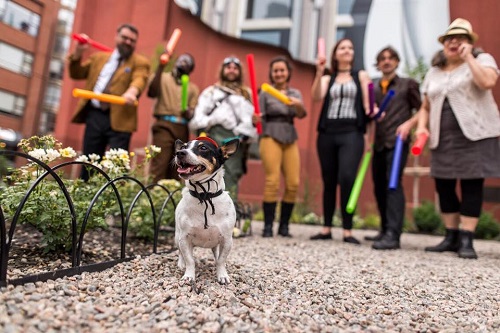 I went to Two Gentlewomen of Verona by Dauntless City Theatre because it was marketed as intersectional feminism meets Shakespeare. The title alone had gender bender written all over it. Shakespeare has always been pretty cheeky about gender, considering actors in his time period were always men and many of his comedies included disguise and misidentification dealing with gender. Even in modern times, this has been played with in work like Shakespeare in Love or Cue for Treason.

The casting was done within the expected parameters: actors who were perceived as women played men, actors who were perceived as men played women, and the cast was exceptionally diverse. But that’s pretty much where it ended. It never felt like the gender swap was done for any other reason than novelty and the script read just like a run-of-the-mill Shakespeare production. While I, in theory, laud the show for integrating a gender non-binary character in Julian (originally Julia in the play), played by non-binary actor Jordi O’Deal, it seemed like a missed opportunity to delve into the gender complexities the play could address. Due to confusing choices by the costume department and insufficient indicators of the character’s non-binary status, their gender nonconformity was not well-communicated, muddling the otherwise positive layer of increased gender diversity. While in most cases the audience could reasonably be asked to simply be satisfied being unclear on the gender of a character, within a text that relies so heavily on gender as a plot device, this lack of communication insurmountably hindered the production.

Outside of the gender dynamics, Dauntless City Theatre selected a unique location for the play. Berczy Park has recently been renovated to have a dog fountain, which had a cute tie in because one character, Crab, is an actual dog. The cast took the audience on a journey through the park, moving each scene by the cast playing a delightful song on Boomwhackers Musical tubes. Actually, this was the highlight of the play for me as it had a Pied Piper of Hamlin feel and I would have followed that music anywhere. The downside of the park was that it is surrounded by noisy streets which made actor projection imperative to the success of the play. Because some actors weren’t able to compensate for the challenging environment, lines that were key to the plot were lost.

What did hold the play together was Launce (Leslie McBay) and Speed (Isabel Hornstein). These actors projected, used the space to its advantage, held the characters in their bodies and charmed the audience. The clown roles in Shakespeare have always held a sweet spot in my heart and these actors didn’t sour it. Both of these actors are on my radar for their future productions.