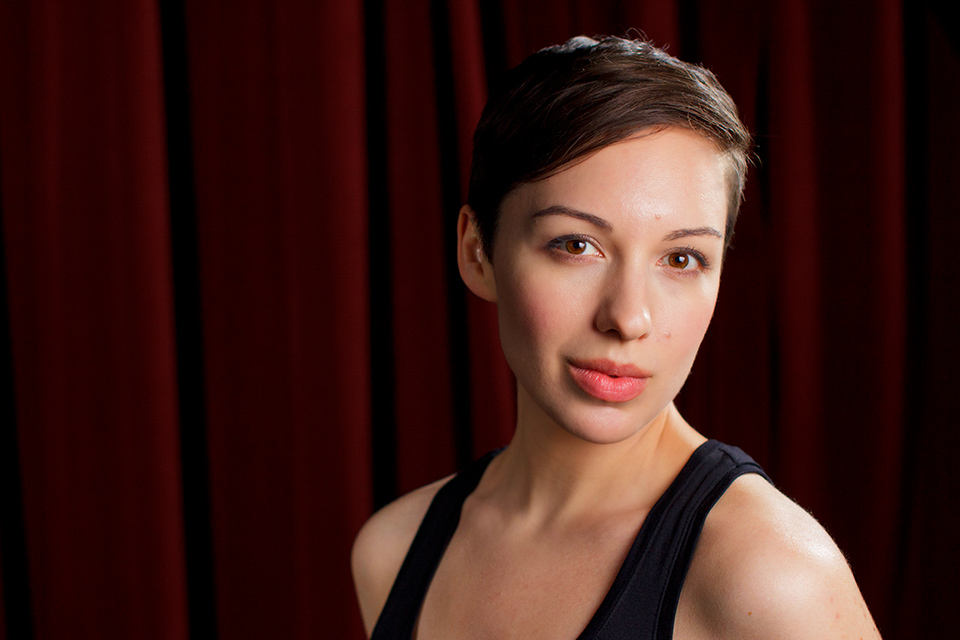 Leslie McBay played Romeo. In Headstrong Collective/Urban Bard’s site-specific, LGBTQ take on the world’s most famous play (which she also co-produced), the success or failure of the concept rested largely on Leslie’s ability to play Romeo for all that he’s always been and everything that she has the potential to be.

Instead of just telling you whether she succeeded or not, I’m just going to point out that Leslie is nominated for Best Actress in our Regional/Independent division this year and Romeo & (her) Juliet is nominated for a total of four My Theatre Awards (including Best Ensemble and Best Production).

Can you remember the first theatre production you ever saw?
I actually can! I was very young (maybe 6?) and my mom brought me to see a local production of Jesus Christ Superstar. A handful of actors came out dressed in black, singing “What’s the Buzz” and carrying Jesus above their heads and I was completely taken. I wasn’t exactly sure what was happening, but I was feeling things.

What’s your favourite role you’ve ever played?
I think I have to go with Mary in Tuesdays & Sundays by Daniel Arnold and Medina Hahn. It’s a beautiful, lyrical two-hander that follows a young couple from the giddiness of their first meeting to the dark (spoiler alert: murderous) end of their relationship. And it’s based on a true 19th Century Canadian story!

Do you have a dream part you’d like to play one day?
Not one specific role. I often find myself falling in love with projects as I prepare for auditions. But I think my dream is to play only characters that are active in the story, and have agency, which traditionally isn’t the easiest for a lady actor.

You co-produced R&(h)J. How did the concept develop?
My co-producer (the lovely Melanie Hrymak, who is nominated separately for her solo show!) and I were having a conversation lamenting the dearth of active lady roles, especially in classical theatre. It went something like, “There’s no reason Romeo and Juliet can’t be a play about two women falling in love!” “No, there’s not. But people aren’t doing it… We should do it!” Followed by many hours of script editing and reimagining the world of the play.

What is it about the character of Romeo that appealed to you?
I think it was Romeo in the context of our adaptation, not entirely the character on the page. I’ve played a lot of ingenues who are written to be nice and pretty and help out the menfolk in the story. That gets boring really quickly. But to play Romeo and be a queer person telling a queer love story in what is often called the greatest love story of all time was very meaningful for me.

How did you go about finding your Juliet?
We wanted to cast Juliet before we cast the rest of the show, so we were looking in our network for someone who was not your typical Juliet. Mel had worked with Krystina Bojanowski on Two Noble Kinsmen and I had seen her play Iago in a gender-swapped Othello (our director Scott Moyle had done some fight choreography for that production), so we knew she was great with Shakespeare and non-traditional casting. We brought her in to read and ate cinnamon buns, and by the end of that meeting we knew we had found our Juliet.

Had you done much Shakespeare before? Had you ever worked on Romeo & Juliet?
I was lucky to have some great teachers growing up, and I started doing Shakespeare as a teenager. I always liked working with heightened language. This was my first time doing Romeo and Juliet, except for scenes in classes where I had to be Juliet. In university I was told that I could only audition with female Shakespearean monologues, and I had to be wearing a skirt while doing it. Now I’m all pants and whatever monologues I connect with!

What new elements of Romeo did you discover playing him as a female character?
Oh, I dunno! I’ve never played Romeo as a male character. There are some characters whose gender identity is central to their personhood, but not so with Romeo. Her central desire is to be loved and to belong, which allowed me to be more fluid with gender expression.

Beyond your gender, what were some of the unique elements that you brought to Romeo?
I think I bring vulnerability to every role play, which is important to Romeo who just feels all the feels. So many of Romeo’s actions and decisions are based on whatever overwhelming emotion she’s feeling at the moment. The play would end a lot differently if she just took a day to think about things instead of jumping on the runaway train of feels.

Are there other male characters in Shakespeare’s canon whom you think could be particularly interesting played as women?
I would put Hamlet, Richard III, Falstaff, Brutus, Rosencrantz & Guildenstern, and Lear on my list. Some of these I have already had the pleasure of seeing, and I hope to see the rest soon!

You’re nominated along with the rest of your cast for Best Ensemble. Tell us a bit about working with some of those actors.
We had a really strong ensemble, many of them cast in roles they would not typically play, and it was such a pleasure to work with all of them. Lisa Karen Cox was a treat as Friar Laurence. She kept me on my toes. I would run into my first scene with her (right after the balcony scene) and she would always be in a different spot working on something slightly different as I came in to surprise her. Max Tepper as Mercutio and Clare Blackwood as Benvolio were my onstage family and kept me laughing even when I was mopey Romeo. I still have a collection of the “drunk” selfies they took on my phone during the party scene.

Scott Moyle is also nominated this year for directing Romeo & (her) Juliet. What would you say is the most important conversation you two had in developing your interpretation of the story and Romeo specifically?
At some point in the rehearsal process, I checked in with Scott about how things were developing with Romeo. I wasn’t trying to perform masculinity or femininity, but to be a young person desperately in love. Scott fully agreed and supported me in playing a person and not a gender. Having the freedom to not perform gender in a specific way made me able to connect with my body in a way that felt wonderfully grounded and smashed all the things I had been taught about being a woman in Shakespeare.

Tell us a bit about the site-specific location. How did you choose the church? What challenges and opportunities did it present compared to a conventional theatre?
The church was central to our story as Friar Laurence’s church and our story was framed as part of a memorial service after the deaths of Tybalt, Mercutio, Romeo and Juliet. We looked at a bunch of churches and Bloor Street United offered us a beautiful atmosphere and a lot of playing space in an explicitly LGBTQ-friendly building. The location really allowed us to immerse ourselves and the audience in the story, and make them a part of the community that failed these kids.

But, we weren’t able to leave anything at the church between shows, so we had to pack up the show to be stored at our designer’s nearby apartment and in our stage manager’s car. Our dressing rooms were a stairwell, so not the most glamourous. We had limited ability to control the lighting and the only way to get between entrances was to sprint through the basement and up a couple flights of stairs.

Did you have a favourite moment in the production?
A weird small moment: escaping after killing Tybalt. I had to get to the opposite end of the church as quickly as possible, avoiding other characters entering from every corner and a crowd of audience members by jumping over pews and sprinting through aisles. I don’t often get to be really physical onstage, and the physicality of that moment made everything feel so much more viscerally real, grounding me for the rest of the play.

What are you doing now/ what’s your next project?
At the moment, I’m working on Hero/Verges in Dauntless City Theatre’s (formerly Urban Bard) Drunk Ado About Nothing, the sequel to Drunk Macbeth. A little less than the most serious Shakespeare you will ever see, but it’s a fantastic evening and a great way to raise some money for upcoming shows!

I’m also working on the producer side of Headstrong Collective’s next production Boston Marriage by David Mamet, which is at the Campbell House this April. Kelli Fox directs a stellar cast: Catherine McNally, Deborah Drakeford and Charlotte Dennis. It’s going to be great!

Do you have anything you’d like to add?
Thanks so much for the nomination!