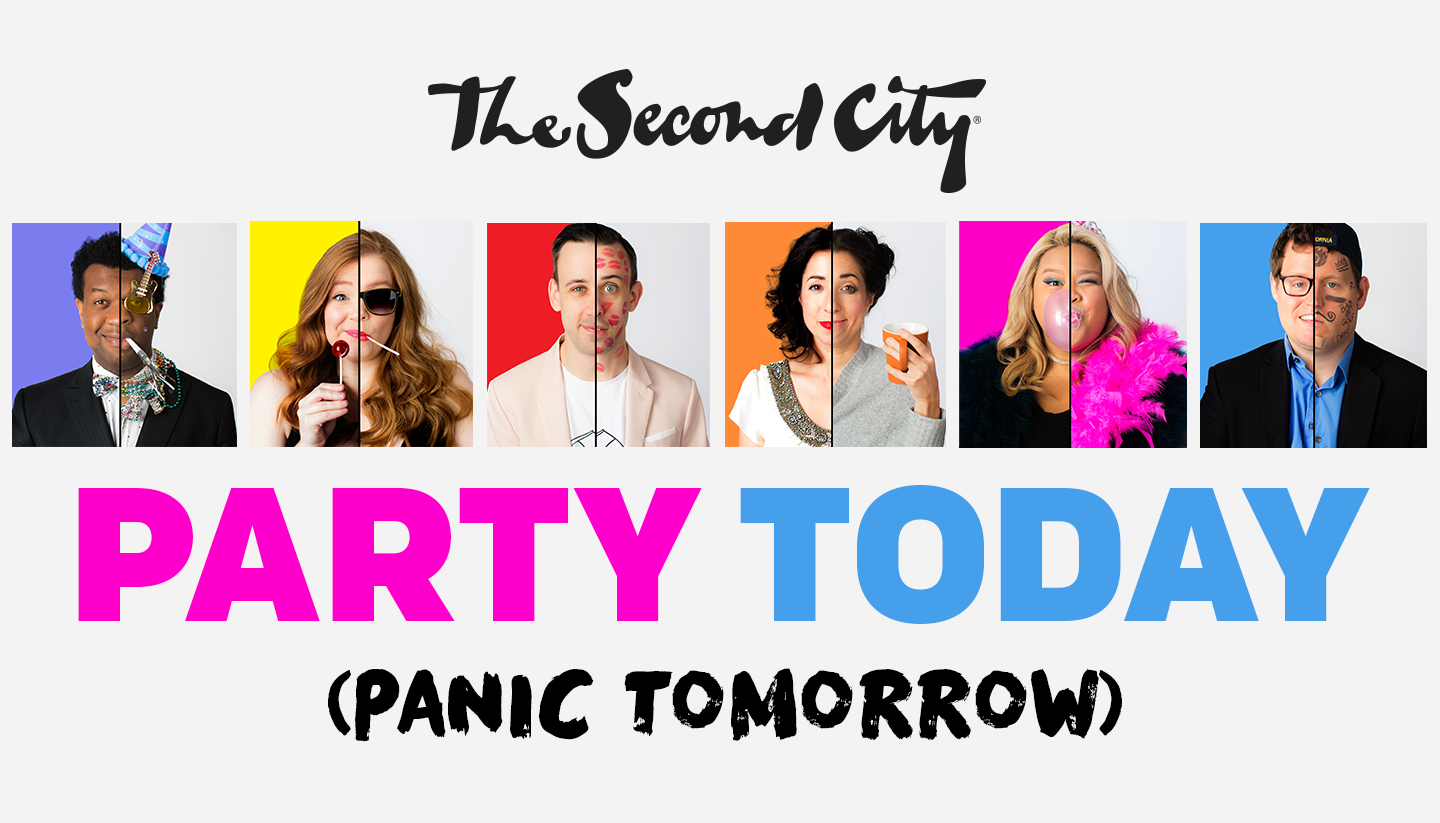 Party Today (Panic Tomorrow) is an apt name for The Second City Toronto’s silliest and least political mainstage show in a few cycles. There are moments when the bold political humour that made the last revue so impactful shows back up (Brandon Hackett makes a police brutality joke out of nowhere and its lack of tonal context quadruples the impact) but for the most part this entry is lighter on the state-of-the-world incisive stuff, putting the focus back on comedy of manners and relationships- a great full-cast game night scene sets the tone early, then Nadine Djoury as a demanding insomniac wife gets some of the show’s biggest laughs. The revue lurches between absurdity and reality with varying degrees of success (Colin Munch plays a talking banana then the heavy-drinking father of an estranged son; strangely the former is more poignant) and too many improv-reliant scenes make for a tumultuous ride that could use a bit more polish. Devon Hyland is the star player on a pure laughs-per-minute scale but the rate at which he makes his colleagues corpse gets frustrating quickly (to be clear- that’s on them, not him). Though it doesn’t hit nearly as hard as its immediate predecessors, and frankly doesn’t seem to be trying to, the 80th revue does provide a few moments of unforgettable sincerity that play for emotional and comedic effect in equal measure.

Over the course of the nearly two-hour performance (which is followed by an improv set; the one I saw was strange, messy, and admirably committed), four sketches in particular stood out to me, all anchored by the incomparable Ann Pornel. Now, when I say “stood out to me”, I mean exactly that. These might not be your favourite sketches of Party Today (Panic Tomorrow)– objectively great though they all are- but they were mine. The review part of this piece is over so let me get a little editorial for a second: I love Ann Pornel. I don’t know her, but I love her. I should probably chill, it’s getting embarrassing, but I’ve long ago come to terms with the fact that I have no chill and I just really need you all to know how much it means to me that Ann Pornel is not only a member of the Second City Toronto mainstage cast (now on her third revue) but she’s the strongest voice onstage. Even the most cohesive of ensembles has someone who stands out and here it’s Pornel, her brazenly irreverent, incessantly honest, unapologetically feminist voice permeating the show from the quickfire two-hander she shares with Munch to open the show with healing by way of fury (a note she hits again quickly in a tour-de-force with Hyland as a couple with unconventional communication practices), to her bravura solo musical number demanding that the word “bitch” be exiled from the collective vocabulary, to a sentimental masterpiece in which Allana Reoch plays her emotionally inarticulate father who has to use his love of the Blue Jays to tell his daughter how he feels on her wedding day (Reoch gets the more interesting character here but Jays superfan Pornel’s fingerprints are all over the sketch she mostly anchors with empathetic reactions).

Reoch and Djoury are equally responsible for the rock solid female perspective that comes through uniquely in this show and their confessional scene that highlights the performance features intelligent, vulnerable, hilarious work from all three women. They demand to be heard and, at this climactic moment, acknowledge the patriarchal gaze that’s followed them throughout the show; they strip down and unflinchingly overshare the relatable realities of a life lived in one of those gazed-upon bodies. For any given woman in the audience, their champion in this scene could be any or all of the women onstage. But, for me, it’s Pornel- the only fat female performer I’ve ever seen give herself permission to play the romantic lead, let alone the diva; a brash, outspoken woman who tells the truth at any cost and refuses to accept being called a bitch for it. In this revue (and the two before it), Ann Pornel says things out loud that I’ve never heard anyone say out loud, things that are true but most people don’t know. I’m a loud voice that’s always trying to be quieter and a big person always trying to take up less space but I just watched Ann Pornel completely take over The Second City Toronto’s 80th revue, so fuck that shit. Representation is important and, as a performer of colour, Pornel is carrying the torch for so many more people than just abrasive fat girls who refuse to believe they don’t deserve love but, just by being there and being great and owning how great she is and how much she deserves to be there, Pornel makes me feel seen, she makes me feel valid, and she makes me want to shout “don’t call me bitch!”. All the merely positive reviews in the world wouldn’t be enough to thank her for that, so I wrote this instead.